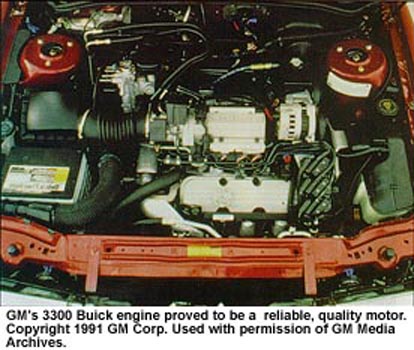 The Buick 3300 was introduced in 1989 as a
replacement for the 3.0L that had been around since 1982. It had
the updated block with on-center bores, just like the revised
version of the 3800 that came out the year before, along with
several other changes and improvements.

The engine had a smaller bore (3.70" versus
3.80") and a longer stroke (3.16" versus 2.70")
than the 3.0L, along with roller lifters and multiport injection.
Consequently, it had more torque, more horsepower, better fuel
economy, lower emissions (even without an EGR valve), and it weighed
24 pounds less. That’s quite a package! 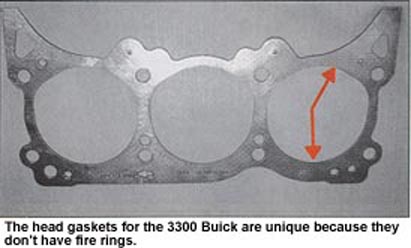 The 3300 was used up through 1993 when the
3100 Chevy became the small corporate V6 for most of GM’s compact
and intermediate sized cars. These engines have proven to be exceptionally
durable, but they’re finally coming due for a rebuild, so it’s
time to take a look at the 3300 and review all of the changes
that were made during the few years that it was offered.

Although it was only built for five years,
there were three blocks, two cranks, two cams and two heads that
add up to four long blocks, so it can be confusing to rebuild.
Here’s how it all began and ended: 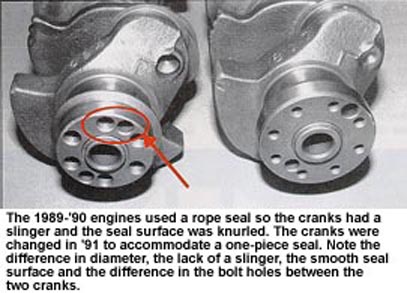 When the 3300 was introduced in 1989, it had
a two-piece rear seal and a straight rail that ran at an angle
across the front of the lifter valley to seal the intake manifold.
There were no holes for a cam thrust plate because the spring-loaded
button in the front of the cam kept it from walking in and out.
This early block is a 25532062 casting.

In 1991, the original block was replaced by
one that had a one-piece rear seal and three holes in the front
for a cam thrust plate. It still had the straight rail that went
across the block at an angle to seal the front of the intake.
It’s a 25534816 casting.

In 1992, the block was changed with the addition
of two more holes in the front of the block, apparently for a
bracket or a mount of some kind. One hole was drilled at the top
front corner of the block on the driver’s side, and the other
one was drilled perpendicular to the face of the block next to
the rail for the intake manifold, so it had a bulge in it for
the bolt hole. This block has a 24500498 or a 24502090 casting
number. It was used in 1993, too. 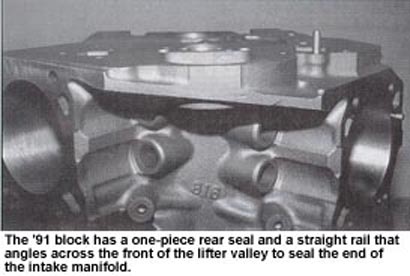 Buick used two completely different cams in
the 3300. The first one that was used in 1989 and ’90 engines
came with a flange that measured 2.960". It had a dowel pin
and three threaded holes for the cam gear. The flanges on most
of these cams were .418" thick, but there were a few thin
ones that measured .387" that were installed along with a
special .032" shim to keep the timing chain properly aligned.

The cams with the thin flange can be visually
identified by the knurl on the outside diameter of the flange
itself (see photo on page 48). Cam movement was controlled with
a spring-loaded cam button that was held in place by the front
cover. 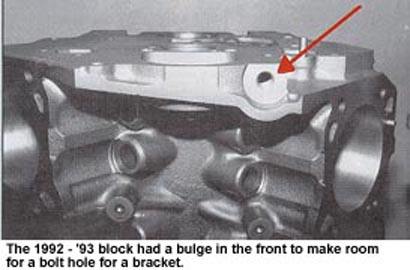 A new cam that had a snout instead of a flange
was introduced in 1991. It used a keyway to locate the cam gear
and had one big, threaded hole in the center of the cam for the
bolt that held the cam gear on. A circular thrust plate with three
holes was bolted to the front of the block to keep the cam in
place.

Both the early and late cams used in the 3300s
had slightly different specs than the ones that were used in the
corresponding 3800s, but the grinds are similar so most rebuilders
use them interchangeably. The OEM part numbers of the cams that
came in the 3300 and 3800 are as follows:

If you prefer to keep them separate by family,
you will have to use a "Cam Doctor" or something similar
to read the specs off each cam in order to identify them by part
number and application; most of them don’t have any identification
on them. 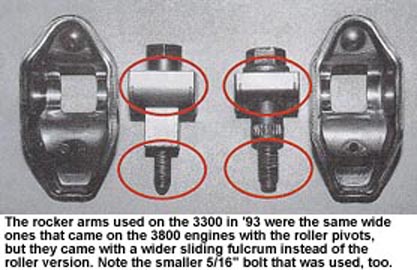 The bolt holes were changed in ’93 because
the 3800 engines switched to a roller rocker pivot that had a
smaller bolt so there was enough room for the roller bearings
on both sides of the rocker stand.

The 1989 through ’92 3300 used exactly the
same heads that were installed on the 3800 VIN "C" engines.
It shared a common head casting with the 3800 in ’93. They came
with the 5/16" bolt holes just like the 3800, but they didn’t
have the 3/4" breather hole in the intake surface that was
required for the 3800 because of the crankcase ventilation system
that was used along with the new plastic intake manifold. 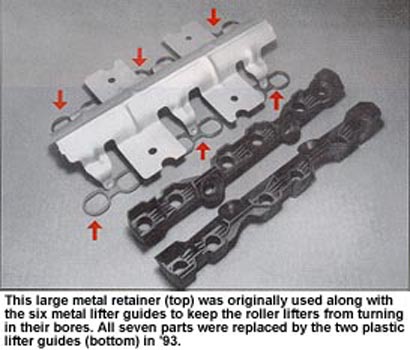 The head gaskets on the 3300 are unique. They
have a perforated metal core with expanded graphite on both sides
and no fire rings. Both the head and deck surface had to be ground
and polished to within .002" flatness. The head bolt torque
was increased by 15% in order to make this special gasket work,
but the payoff was less cylinder distortion which meant better
oil control and lower emissions.

Most rebuilders have found that the graphite
gaskets without the fire rings work on a slightly rougher surface
as long as the surfaces are true. They’ve also found that they
can use composition head gaskets with fire rings on their regular
surface finish.

Back when we rebuilt our first 3300, we checked
cylinder distortion with both types of gaskets and found that
it made very little difference, so we have done them both ways
depending on which gaskets were available in the aftermarket.

All of the 3300 engines used a conventional
rocker setup with the pedestal type fulcrums. The 1989-’92 heads
had the narrow fulcrums (1.12" O.D.) with narrow rockers
(1.15" I.D.) and 3/8" bolts. They used hardened pushrods
along with two pushrod guide plates that were held down by the
rocker pedestals. 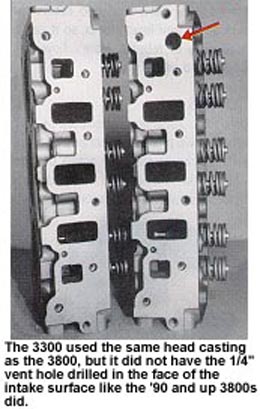 The ’93 engines switched to the same wide rocker
(1.18" I.D.) that was used with the roller pedestals on the
3800s, but they used a special, wider sliding fulcrum (1.165"
O.D.) with 5/16" rocker bolts instead of the roller pivots.
This combination allowed GM to standardize its head machining
process and use common parts in the valvetrain for both of the
Buick V6 engines, except for the fulcrums. Apparently, GM didn’t
need any more fuel mileage out of the 3300, so it decided not
to spend the extra money on the roller setup.

The pushrod guide plates were eliminated in
’93, too, because the rocker pedestals were held in place by two
aluminum die castings (p/n 24501397). The first ’93 engine we
saw still had hardened pushrods, but they may have been replaced
with some that weren’t hardened later on, so it would be best
to check all of them. If you do find some that aren’t hardened,
don’t use them in an earlier engine with the pushrod guide plate
because they won’t last for long.

There was one more change to the valvetrain
in ’93. Buick replaced the six metal lifter guides and the steel
hold-down that had six fingers with two plastic lifter guides
that did it all. They are available from GM under p/n 24502738.

Now that we have all the pieces figured out,
how do they all fit together? It actually takes four completes
to cover five years. Here are the combinations: 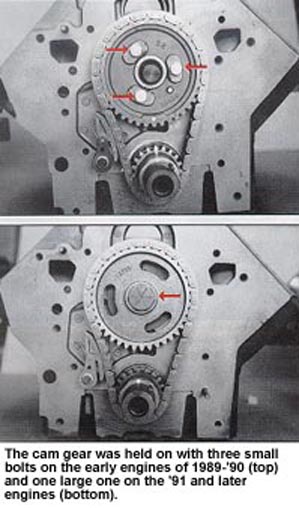 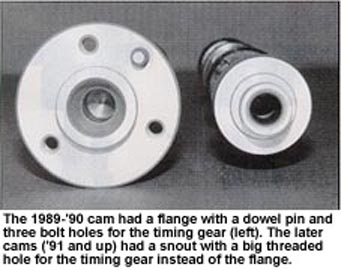 That seems like a lot of completes for an engine
that only lasted for five years, but it can’t really be done with
less unless you disregard the head and rocker changes in ’93 and
combine the ’92s with the ’93s.

That’s the story of the 3300. It was a good
engine that had it all – performance, economy and emissions. It’s
probably a good thing for our industry that the 3300 didn’t end
up being GM’s small corporate V6, because it was almost too good.
However, there are still a bunch of them out there that are about
due to be rebuilt. Now you know what to expect when they show
up at your door. 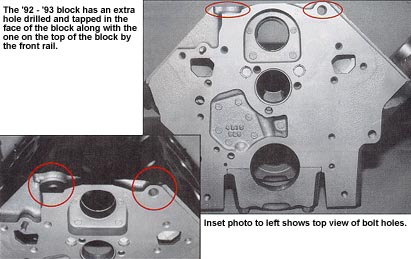 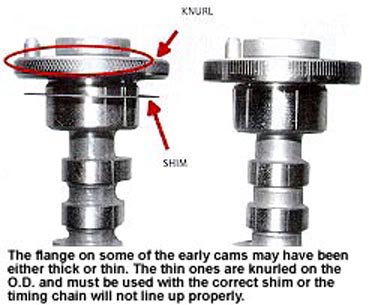