The recent move to clean up inner city exhaust
emissions has resulted in renewed interest in the use of LPG (Liquefied
Petroleum Gas) and LNG (Liquefied Natural gas) as motor fuels.
These fuels are almost pure propane with a little butane present.

Tax incentives are being offered to encourage
fleet operators to convert to gaseous fuels and more vehicles
are being offered by the OEMs that have already been converted.
Many non-factory converted engines are being used in industrial
type applications, and in propane delivery trucks that run on
the fuel in the tank on the back. These non-factory converted
engines often need valve and seat replacement in less than a year
of operation because they do not have the correct valves and seats
in them for propane.

What does this mean for cylinder head rebuilders
today? There are great opportunities out there for the shop that
does the work right the first time. Lets look at this fuel and
what its use means to the rebuilder.

Gaseous fuels burn with an almost complete
absence of ashy deposits. These deposits in gasoline engines protect
the valve and seat faces from wear. These deposits are also the
ones that turn the engine oil black.

A propane engine usually has clear oil when
an oil change interval is reached. The absence of these typical
deposits gives rise to the name "dry fuel" and is commonly
used to describe LPG. The lack of these deposits, however, allows
direct contact between the valve and seat mating surfaces in the
combustion chamber.

This direct contact causes micro-welding to
occur with metal from one surface transferring to the other. During
the next open/close cycle the deposits heat up and oxidize. These
oxides are both corrosive and abrasive and explain why some non-OE
converted engines suffer severe and rapid valve and seat wear.

An interesting observation when this happens
is that the use of the wrong valve head material will often cause
seat recession with minimum valve face wear. It would be a mistake
to repeat the use of this material combination during rebuilding
or conversion by reusing the valves. See photo at lower right.

Another cause of rapid seat wear is that valve
heads flex under combustion pressures. In gas engines this helps
the valve sealing process. In LPG applications, however, this
flexing can accelerate a wear problem and lead to early failure.

To combat this wear, various techniques can
be used. The first to consider is to widen the seat contact width
to about 0.100". A full 76% of the heat transferred out of
the valve goes out through the valve-face-to-seat contact area.
Widening the seat allows more heat transfer and spreads the compressive
load over a larger area. This helps prevent the welding process,
also known as adhesive wear. Valve spring pressure should also
be checked. Low spring pressure will adversely affect heat transfer.

The next concern is to ensure that there is
good contact between the valve and seat faces. It is not recommended
to machine an interference angle between these faces today; this
is particularly important for LPG heads. It is also good practice
to "blue" the contact area and hand lap if necessary.
Valve rotators should be replaced or welded up to prevent excessive
face wear.

While these are techniques to aid the rebuilder,
the component suppliers can do their part to help the valves and
seats survive, too. One action taken is to upgrade the materials
of valves and seats used in such applications.

Let’s look at the latest material trends used
in OEM supplied LPG engines. Valves for these engines are specifically
designed to withstand the extra wear experienced with the use
of LPG fuels. The valve faces need to be protected as do the seat
contact surfaces in the cylinder head. 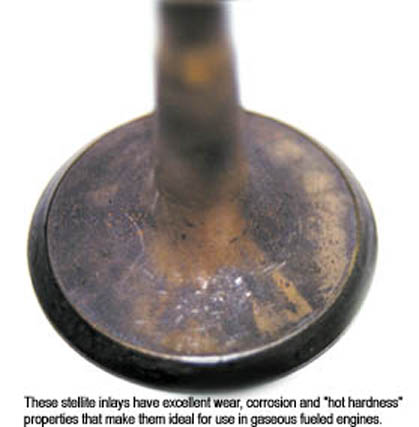 In the case of valves, the addition of hard
facing alloys or stellites is considered essential in preventing
rapid wear and subsequent early valve failures. Rather than the
valve head being made entirely of stellite, these valves have
a cobalt-based inlay welded into the valve contact face.

Most factory converted engines use valvetrain
components that are dimensionally identical to their gasoline
counterparts, so it is easy to make application errors here. It
is almost impossible to detect these valves except by careful
attention to the part number on the valve.

There is no non-destructive test that I know
of for stellite inlay detection, but the latest machining techniques
can offer some insight. Most current stellite valve production
uses a process called ‘snag cutting’. This process produces a
machined area at the top of the seat (the stem side) to clean
up the inlay edge.

It often looks like the valve was intended
to be fully machined under the head, but missed half of the process.
Regular austenitic ‘stainless exhaust alloys’ are generally good
to about 1300° to 1450° F depending on stress, while
the stellites can survive up to 1600° F.

In some cases the valve head has to be made
from a nickel-based super alloy such as the Inconel range of materials.
These alloys approach the hot hardness readings of the stellites
and are now used in all domestic big block applications that are
factory converted.

These designs also feature an increased head
thickness and underhead radii that reduce head flex, thus preventing
face wear due to valve head bending. In some cases, 454 GMs and
429/460 Fords, for example, both stellite faces and Inconel heads
are required to provide an acceptable service life with the Ford
application being sodium cooled as well.

We are talking about a very high-cost valve
here. Incidentally, the Inconels are prone to scuffing when used
as a wear surface in a cast iron guide. Consequently, all Inconel
headed valves are of welded, two-piece construction with the stem
being a high-carbon intake style material.

Many people think that two-piece valves are
‘cheaper’ than one-piece valves but that is not the case. A welded
valve must still have the head forged and then is inertia welded
to the stem. More machining is required as is 100% ultrasonic
testing of the weldment area.

Two-piece valves are far from being cheaper.
In fact, these extra manufacturing processes add considerably
to the cost. That just about covers the valves so let’s move on
to the seats. 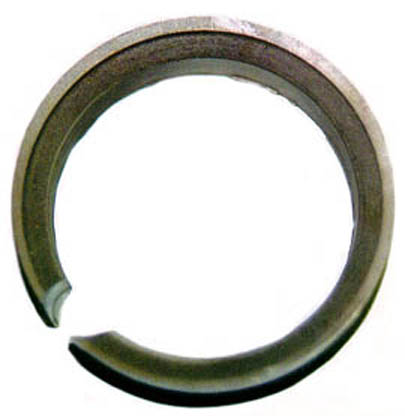 The valve seats in the head also need some
attention. If the head was not designed to run on LPG, the valve
seats need to be inserted with a material specifically designed
for gaseous fuel use. The aforementioned big blocks all have factory
installed inserts in the exhaust when set up for propane by the
OEM. These seats are generally made from non-magnetic, nickel-based
alloys with some limited use of high grade powdered metal technology
in very late model applications.

These alloys have a higher hot hardness than
other magnetic or iron-base alloys, and they withstand the corrosive
and abrasive action present in LPG fueled engines. If you do not
know what seats have already been put in a casting and you do
not know if the head was factory prepared for use with propane,
it is recommended to replace the seats with those designed for
use with LPG fuel. It is cheap insurance in the long run.

We still get heads sent in with old cast iron
seats that were installed in them in the days of leaded fuel.
With propane you would be lucky to get the vehicle out of the
garage with this type of seat installed.

When this type of seat fails it often disappears
completely out the exhaust port. It actually looks like someone
forgot to put the seats in. The factory seats often had a light
press fit, about 0.003". Even though factory sized replacement
is often available in the replacement market, if there is any
doubt about the roundness of the counterbore it is recommended
to go ahead and install an oversize O.D. replacement. Any head
that has been severely overheated or has undergone a welded repair
would automatically fall into this category due to the possibility
of counterbore distortion.

It is worth a few more words concerning the
429/460 Ford engines. The only engine currently offered propane-converted
by Ford is the 429. This engine uses a stellite intake valve with
a 1.977" head diameter, and a sodium cooled, Inconel-headed,
stellite faced chrome plated exhaust with a 1.654" head diameter.
These are the fuel injected head valves from 1991 and later and
have 11/32" valve stems.

It is very often the service that comes after
the sale that can really make the difference in engine survival.
When an engine has been converted to LPG use and the cylinder
head has been built specifically for that type fuel, it can still
fail without attention to both the ignition system and the fuel
mixture.

The fuel injected engines with a computerized
engine management system are particularly difficult to set up.
The computer in these engines has too much retard under full load
for propane fuel.

The fuel delivery system is also important.
Most LPG systems require about a 2% exhaust oxygen content to
ensure adequate cooling in the combustion chamber. Unlike gasoline
engines, a rich propane mixture overheats the valves and seats
causing seat recession and rapid valve wear. The recommended way
to set up the engine with the correct fuel mixture is to use an
exhaust gas analyzer. One source for this tool is NeoTronics,
Flowery Branch, GA.

Check with your parts supplier for valves and
seats designed for propane fuel applications. S.B. International,
Nashville, TN, for example, stocks E-Loy stellite valves and J-Loy
"Star Series" seats for the 34 most popular LPG engines
in use, whether factory or aftermarket converted.

Alan Carver is vice president of engineering
for S.B. International, Inc., Nashville, TN. He has made numerous
technical presentations before engine rebuilders.