Toyota has built numerous four cylinder engine families over the years, but one that has been in use for quite a long time is the R-series. The R-series has been the main motor used in almost all Toyota pick-up trucks, as well as the rear-wheel-drive (RWD) Celica and Coronas. 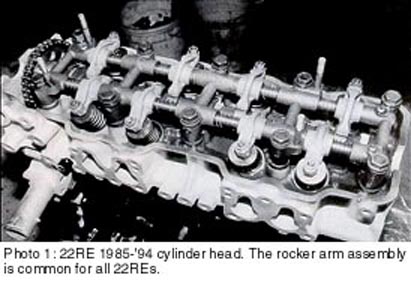 The 20R was introduced in 1975 and used up until 1980. In 1981 the larger bore 22R was released. The R-series has a cast iron block, aluminum head, and is an overhead camshaft (OHC) design with the cam being driven by a timing chain.

The oil pump is mounted on the front timing cover and slips over the end of the crankshaft where it is driven by a splined gear at the end of the crank. The 20/22Rs were used in only RWD applications, never in a front-wheel-drive (FWD) vehicle. So when the RWD Corona was replaced in the U.S. by the FWD Camry in 1983, and the Celica went to front wheel drive in 1986, the only vehicles that continued to use the 22R were the pick-ups and the 4-Runner sport utility vehicles. However, there are quite a few older Toyota pick-ups still being used today and they seem to hold resale value fairly well, which should provide some demand for rebuilding the 22R engines.

One common mistake many people make when rebuilding this engine is to assume that 20R means 2.0L and 22R means 2.2L. Remember that in Toyota‘s numbering system the first number is the revision of that particular engine family, which does not pertain to displacement. The 20R is a 2.2L (2189cc), while the 22R is a 2.4L (2367cc) engine. There also is a 21R that was used in Japan and Europe with a displacement of 2.0L, but for our purposes we don’t need to discuss it.20R, 21R and 22R engine specs20R: 2189cc (88.5mm X 89mm),1975-’80, used in pick-ups, Celicas and Coronas.21R: 1972cc (84mm X 89mm), used in overseas markets and not available in the U.S.22R, 22RE, 22REC, 22RTEC: 2367cc (92mm X 89mm), used in 1981-’94 pick-ups, 4-Runners, Celicas through 1985, and Coronas through 1982.1981-’82The 22R was introduced in 1981 on the Corona, Celica and pick-ups replacing the smaller bore 20R. The crankshaft and connecting rods were carry-over parts from the 20R. The cylinder head was a hemispherical chamber with canted valves.The rocker arm assembly was held on by the head bolts (see Photo 1). The overhead camshaft was driven by a double roller chain. For 1982 the motor stayed the same, with no changes.1983-’84In 1983 several changes were made.Main bearing alignment tangs were changed, requiring the use of different main bearings (see Photo 2). Timing components were changed from the double roller to a single roller chain and sprockets, different guides, tensioner, and a splined drive for the oil pump (see Photo 3). Some models had fuel injection, but the only difference was the addition of some extra bolt holes to the intake manifold side for the EFI intake. This head will retro-fit back to the 1981-’82 head, but you can’t use the earlier head on an EFI ’83-’84 model.1985-’94The 1985 model year was one of numerous changes for the 22R. Carbureted and EFI models both were continued, and all the changes made apply to both fueled versions.The block deck height was lowered from 11.312″ (287mm) in the earlier blocks, i.e., 1981-’84, to 11.062″ (281mm) on the 1985-’94 blocks. This is only ¼”, and can be very difficult to tell even when the earlier and later model blocks are placed side-by-side. The best way to tell them apart is to physically measure the height (see Photo 4).Front cover depth was decreased while the oil pump thickness was increased. The front crank seal position is the same distance from the front of the block (3.00″). Formerly (1981-’84), the cover was 1.715″ from the front of the block to the oil pump mounting surface, while the oil pump was 1.290″ deep. In 1985 the cover was 1.435″ from the front of the block to the oil pump mounting surface, and the oil pump was 1.570″ deep (see Photo 5 and Photo 6).Timing remained as the single roller that was introduced in 1983, however, due to the shorter block, the timing chain and guides were shortened. The chain was shortened from 98 links to 96 links. The curved guide was changed slightly in its curvature, and the mounting bolts used now featured a longer shank bolt.The straight guide was shortened slightly and the bolt holes were moved closer together, i.e., inside-to-inside 3.020″ vs. 3.225″ for the ’83-’84 guide. This guide looks practically identical to the earlier one, and even several parts suppliers have had trouble getting it right. The top hole is elongated and, consequently, many people think that makes it universal for both applications. However, they won’t align with the bolt holes on the block (see Photo 7).The cylinder head had numerous changes to it for 1985. The combustion chamber was made smaller and was now kidney shaped. The exhaust ports were also changed from round to pear shaped (see Photo 8).Thrust washers were made thicker, and the third (center) main was narrowed by the same amount (see Photo 2). The crankshaft remained the same.All of the changes made in 1985 continued through the end of the 22R in 1994.1985-’88 Turbo MotorIn 1985 during the height of the turbocharged engine’s popularity, Toyota introduced a turbo version of the 22R in its pick-ups and 4-Runners (22RTEC). The differences included a unique cylinder head with a combustion chamber larger than the kidney shaped chamber introduced in 1985, but smaller than the old 1981-’84 head (see Photo 9).There are only five different variations in long blocks. If timing isn’t furnished, and one isn’t concerned about the bearing difference being correct, the first two applications can be combined if carbureted. The turbo motor isn’t that common, however. If one is needed, the head can be nearly impossible to find.The new pear shaped exhaust ports were used. The block was the new low deck block with an oil drain back hole and oil pressure feed on the left hand side for the turbocharger. The normally aspirated blocks have a casting for the drain back and can be drilled and bolt holes tapped if necessary. All other changes that were made in 1985 also apply to the turbo motor.The 1985-’94 non-turbo engine should be the most popular application for several years to come. It covers almost a full 10 years, something almost unheard of even for domestic applications.