Engine Builders: Everyone who works with cars or trucks is familiar with the terms Torque and Horsepower. But do you understand the difference between the two and can you explain it to your customer? It’s important to have a sound understanding of both and the ability to comprehend what defines each measurement of output.

It is understood that the more torque and horsepower produced by an engine, the more powerful the motor. There are many ways to increase the power rating of an engine. One way is to reduce the friction produced in the engine, which may be accomplished simply by switching to certain quality full synthetic motor oils. Such full synthetic oils may significantly reduce friction compared to conventional oil, and help maximize engine torque and horsepower.

Engine Builders: The AERA Technical Committee offers the following information on cylinder head installation for 1999-2006 Chrysler/Jeep 4.7L VIN J and N engines. This information should be referenced any time the cylinder heads are being installed on these engines.

Note: The cylinder head bolts are tightened using a Torque-To-Angle procedure commonly referred to as TTA. The bolts must be examined BEFORE reuse. If the threads are necked down, the bolts should be replaced. One method of checking for neck-down is to use a like-size nut and check to make sure you can easily thread it along the entire threaded area of the fastener.

Additional note: Even though the cylinder head bolts are tightened using torque and an angle procedure, the bolts are not a Torque-To-Yield TTY, which are a single use design. Therefore, reusing TTA bolt is possible if each bolt is "qualified" first. Follow the steps listed below to install the cylinder heads for these engines.

Position the new cylinder head gasket on the locating dowels. CAUTION: When installing cylinder head, use care not to damage the tensioner arm or the guide arm.

Tighten the bolts in the sequence shown in Figure 1, using the following steps and torque values:

This information should be considered any time the cylinder heads are removed from the block.

These engines use both aluminum cylinder blocks and heads. Over time, following many engine temperature cycles, it is common for their threaded holes to become fatigued. The weakened aluminum will actually attach itself to the more solid fastener. Upon fastener removal, parent metal often rips and tears additional metal as it follows the threaded channel.

In many instances after fastener removal, the remaining threaded hole is damaged significantly enough to require repair. In head bolt hole locations the specified torque reaches 30 ft/lbs + an additional 190° turn (see AERA Technical Bulletin TB 1701R). Any threaded hole that is not 100% of what it was as new will compromise the ability of the fastener function.

For reasons stated above, many AERA machine shops repair all threaded head bolt holes whenever they’ve removed the cylinder heads. Doing so has eliminated an unwanted gasket leak shortly after head re-installation. GM has thread repair kits available for these engines as well as other engines (see AERA Technical Bulletin TB 1867). The type of threaded insert should be a solid design for best results. Several aftermarket companies also supply solid threaded repair inserts for these engines.

We would like to thank AERA, and especially John Goodman and Dave Hagen, for their tireless efforts in providing our readers with quality technical information. As an added bonus with this issue is the AERA Tech Solutions Guide, which features many of the association’s bulletins from the past year, organized logically by manufacturer and engine model. 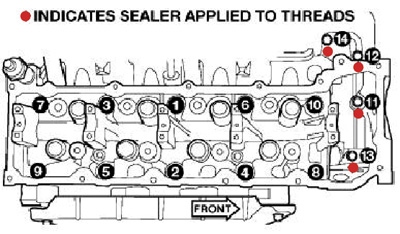