The AERA Technical Committee offers the following information regarding a cylinder head bolt caution and installation for 2001-2002 Kia 1.5L DOHC engines. Information published in the 2001 and 2002 service manuals for this engine is inaccurate.

The 2001 Rio service manual incorrectly specifies the cylinder head bolt torque values as 36.1 in.lbs and 18 in.lbs. respectively (before a final 90 degree tightening step). While the values are correct, the units should read ft.lbs. The 2002 manual states to rotate the head bolts two additional 90° turns; only once is correct.

The correct listing for these engines should read as shown below. Use the head bolt torque sequence in Figure 1 as a reference.

Torque all bolts in sequence to 36.1 ft.lbs.

Loosen all bolts in reverse sequence.

Rotate all bolts in sequence an additional 90° turn.

Also note that the cylinder head bolts used on Rio engines are of the (stretch) type that must must be replaced, not reused, any time they are removed.

The cam carrier on the Rio engine is align bored with the cylinder head. If either requires replacement, it’s necessary to replace both. The cam carrier also requires an oil tight seal between it and the cylinder head. This is accomplished with four special O-ring seals (p/n 0K30E-10-122) around the spark plug cavities, and by using a sealant on the mating surfaces.
Kia inadvertently specified sealant to be used on outside surfaces only. Sealant should be applied to all mating surfaces, while taking care not to allow it into oil or coolant passages.

The specified sealant is for close fitting machined surfaces, and eliminates the need to re-torque after the sealant settles and cures. The sealant to be used when replacing or re-installing the Rio’s cam carrier is either Hylomar Anaerobic Adhesive Grade 3000 or an equivalent, such as Permatex Anaerobic Gasket Maker (see Figure 2).

The part number shown above for the cam carrier O-ring seals will eventually be eliminated. When that occurs, to obtain either component, you’ll have to order the cylinder head/cam carrier assembly. 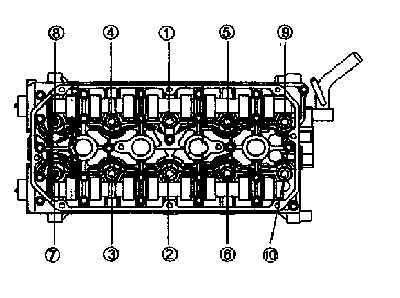 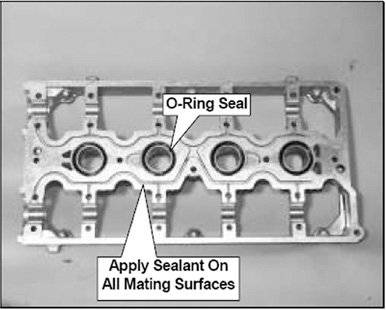