It is August 2007 and Iowa has the eye of the entire nation. Presidential candidates, their staff and reporters are popping up around the state in numbers that rival the cornstalks standing proudly along every road. With all this political activity, there is no doubt that “Green Energy” is going to be an accelerating trend, not only in this current election but for many more in the future.

Regardless of your feelings about the movement, a good friend recently made an analogy that, for me, made the most sense in describing the value of being conscious of our environment. “Imagine having a small yard and a large number of dogs living in your home,” he said. “Each day you let all your dogs ‘go’ in your small yard and never bother to clean up after them. Eventually your yard fills up with…” well, you get the idea.

If we as a nation do nothing to clean up the millions of “dogs” that we let out into our backyard each and every day (vehicles with internal combustion engines that burn carbon-based fossil fuels) we are going to have an atmosphere that is filled with…once again I think you get the idea.

So it is no wonder that conversations of “Green” energy abound in a state that is arguably one of the most progressive in defining and developing sources of alternative energy in the United States, whether it’s E-85, bio-diesel fuel production, solar energy or something else. Talk about a bumper crop: I challenge you to drive down any interstate in Iowa and not see endless seas of windmill farms.

Well, not far from Clear Lake, the historic area where Buddy Holly died in a plane crash after his last performance at the Surf Ballroom (that still stands exactly as it was after his February 2, 1959 performance) is a small town called Algona, which may possibly become more famous to the internal combustion engine than Buddy Holly was to Rock and Roll. Why? Engine development by a company called Hydrogen Engine Center may possibly be doing the single most important thing for the IC engine to stop “filling up our back yard.”

I had the privilege to witness firsthand what may be the nucleus of the next generation of internal combustion engine technology. I know that sounds like a brash statement to make about anything not coming from an American, Japanese or German auto giant but it is true. In May of this year, Hydrogen Engine Center successfully demonstrated the first NH3-fueled OXX Power TM six-cylinder engine. This engine ran flawlessly on a combination of 95 percent NH3 (anhydrous ammonia) and 5 percent hydrogen. 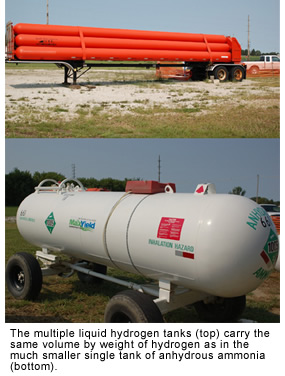 While other manufacturers have tried to solve the H2 dilemma, HEC has come up with a solution that actually makes sense. Unlike gaseous hydrogen, anhydrous ammonia can be stored at greatly reduced pressures, typically less than 350 psig, where hydrogen is typically stored at pressures greater than 5,000 psig. And amazingly, NH3 has more hydrogen by weight than even liquid hydrogen – 17 percent vs. 14 percent (see Figure 1).

How does this all work? Technology! First, credit the development of a fuel injection system capable of handling ammonia. Then, look at the software for the engine mapping in the company’s Oxx Box TM full authority engine control unit. Did I mention the emissions of this engine are water and a trace amount of nitrogen oxide. Imagine an engine that could be brought into a disaster area and supply power and drinking water as a by-product of its combustion process. Just think what that could have done for the people hit by Katrina?

At this point, I either have your attention or you are certain that I am insane. Regardless of your opinion, NH3 is the world’s second most produced chemical (the first is sulfuric acid) as a by-product of the steam reforming of natural gas. Nitrogen is added by a process called the Haber-Bosch process. The primary use is for fertilizing of soil by farmers the world over. Other uses include refrigerant and a more effective transfer method for natural gas.

HEC was founded by Ted Hollinger, a former Ford Motor Co. engineer who has a passion for the environment and freeing this country and the world of the shackles of carbon-based fuel. He is also an automotive enthusiast who loves horsepower. Hydrogen is the answer to freeing the nation and world of oil, with nearly zero emissions and complete elimination of greenhouse gasses. Yet at the same time, HEC is injecting what may be another hundred years of life into the Internal Combustion Engine. 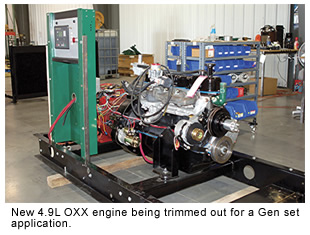 HEC has branded all of its engines OXX Power (Fig 4). Why OXX Power? Because horsepower was just not strong enough for what it is that they do. Back when farmers plowed the fields with animals they considered the power of an ox to be twice that of a horse, hence the name OXX Power.

Their present claim to fame is the 4.9L Oxx Engine which, for all practical purposes, is a copy of the 300 Ford. Ford had no problem with this as long as nothing said Ford on it, and they of course no longer produce the engine. HEC has completely new 4.9L engines and casting components including blocks, (Fig 5) cranks, heads, rods, etc. which are assembled at their plant.

Imagine being able to go back to cars with big block engines being commonplace and horsepower (or in this case Ox) that would light up the tires for blocks with no emissions! Fuel efficiency? Who cares. Emissions? None! More fun, you bet! This company is on to something that may be bigger than life.

We all know about the millions and millions of industrial applications in which this engine was used. Whether in irrigation, stationary power plants or airport operations, all can be re-powered with alternative fuel Oxx Engines. They even have a power unit that can be used in conjunction with wind power. As a windmill spins it runs an electrolysis unit that manufactures hydrogen so when there is no wind the free hydrogen powers up the engine that keeps feeding the power grid. They are also developing a laminated engine that is literally built by stacking of series of laminated plates that will allow quick development of various engine configurations to fit nearly any and every need.

This small company (today) may possibly have the greatest impact on the engine industry that we have yet to see, with little or minor differences in the current infrastructure and design.

Let’s face it, there is not a single one of us that is not both frustrated and negatively impacted by the rising cost of fuel being produced as a by product of crude oil. Each time there is a disruption in the Middle East or a wave hits the US coast line incorrectly the price of gas goes up ten cents or more. It has always amazed me that the price of a barrel of oil goes up at 8:00am in the morning and by lunch time every gas station from Orlando to Spokane have raised their pump prices. Yet that same barrel of oil goes down in price and it is a week or more later that we see the alleged savings at the pump. Imagine an unlimited manufactured resource of fuel for the IC engine! Hydrogen is the most abundant element in the universe and ammonia is loaded with it, so do the math. Even though HEC is primarily producing engines for industrial applications how far away is it from being mainstream in the automotive industry?

The entire Midwest already has an existing pipeline infrastructure covering 13 states. It is also transported very simply by railway, barge and tanker trucks. In fact the tanks used are identical to those of LP gas but with a different valve.

HEC designs and manufactures engines and power generation equipment (Figure 2) for agriculture, industrial, airport ground support vehicular, business and home applications that are all capable of running on a multitude of fuels: ammonia, hydrogen, gasoline, propane, natural gas or ethanol, and development is currently under way for even other fuels (Figure 3). It reminds me of the film “Back to the Future 2” where a DeLoreon used various biodegradable items out of a garbage can at the curb as fuel to power it.

When you have people like Mitt Romney and Barrack Obama entering into conversations and even coming to visit the HEC engine facility during their Presidential campaigns you have to take a step back and think that this must be more than a fluke or flash in the pan.

I conclude with this; any company that is going to dramatically extend the life of the internal combustion engine and hence the reman/rebuild and aftermarket industry has my support and excites me for the long and healthy future of our industry. For much better and more detailed information than I could ever provide, you have to visit http://www.hydrogenenginecenter.com/.