Q:I’ve noticed the main bearing bores on some Cat diesels seem to be bigger than others. Can they still be rebuilt?

A:The AERA Technical Committee offers the following information regarding a main bearing housing bore caution for 1997-2007 Caterpillar diesel engines. Oversize main bearing bores have been reported during engine rebuilding on the above engine.

To allow additional salvage operations and block reclamation the Caterpillar Corporation offers an oversize outside diameter bearing set. The bearings are available in .025? (.635 mm). To determine if a block you’re checking has the oversize bores, follow this procedure:

Tighten the main cap bolts on the right side by rotating them an additional 120º.

Tighten the main cap bolts on the left side by rotating them an additional 120°.

Measure bores with a dial bore gauge that has a dial indicator calibration in .0001? increments.

If the block you are checking is larger than the above standard specification, compare it to the oversize dimension of 5.1383-5.1393? (130.513-130.538 mm). If there is a need to resize, it is recommended that you go to the oversize, rather than repairing by align boring back to standard dimensions.

Caterpillar supplies main bearing sets for oversize bore bearings in both standard and .025? (.635 mm) inside diameters, to allow salvage operations of the crankshaft.

Q:I’ve heard of an engine misfire with some 1.6L GM engines, but there’s no real consistency with the complaints. Any suggestions to nail it down?

A:Some customers may comment on an occasional engine misfire on 2004-2007 GM 1.6L VIN 6 engines. Intermittent misfire may be noticed during deceleration or steady highway driving with the L91 1.6L GM engine after cold start.

The AERA Technical Committee says the misfire may be caused by to a valve sealing condition. If this concern is experienced, and it has been ongoing, a previous GM repair may have been performed. That repair probably involved replacement of only intake valves and seals.

Typically, misfires related to this valve sealing concern will be very intermittent. These misfires may or may not be felt by the driver and they will normally occur during a variety of conditions including engine warm up, deceleration, highway driving, wide open throttle acceleration, and/or uphill driving
The current repair is to replace all valves and seals with the part numbers shown in the table below if they have not been replaced before by GM.

The preceding information was provided by the Engine Builders Association (AERA). 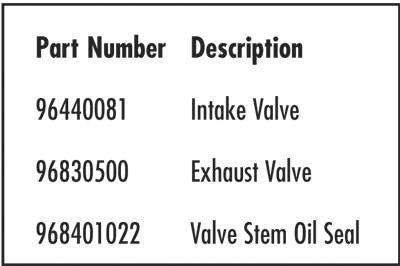