At this time of year, let me be the first one to to give you a gift – and it’s one you’ll  likely use again and again. Many of you may have not seen this issue, but once it bites you, you will always remember the Nissan KA24 engine series in the SOHC configuration. 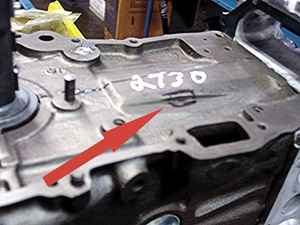 The wear actually looks as though it is a machined area and you may over look the big grooved area. But when the chain cut/rubs into block long enough it may actually break into the water passage (Figure 1).

More often than not when this situation occurs the chain has trashed the front cover as well and if there was coolant in the oil the cover gets the blame.

So take heed when you encounter the KA24, 2.4L SOHC Nissan engine for remanufacturing: there may be a hidden problem that can easily get over looked. Make certain that you inspect the front of the block and if there is any chain rub groove you better make certain that enough casting thickness remains not to end up with a coolant breach.

Back in September, I wrote an article titled “Nightmare on Ford Street” that talked about the 1.9L and 2.0L Ford Escort and 2.0 Ford Focus engines. I described the extremely high rate of instantaneous failures due to debris in the manifold from the original failure, thus contaminating the new install. 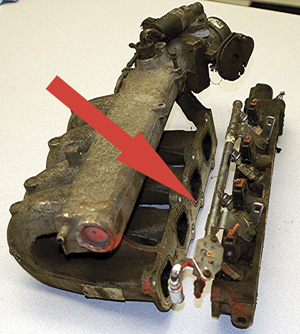 EngINtel: A Stack of Gifts Almost as Satisfying as Chestnuts Roasting on an Open Fire