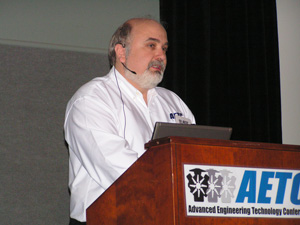 The Advanced Engineering Technology Conference (AETC) has long been known for bringing great minds together to listen to some of the performance industry’s most noteworthy speakers discuss cutting edge engineering technology. Over the years there have been many fascinating speakers who have divulged some of their secrets, and this year continued with the tradition. This was the 18th year of the conference, which has continued to grow in both size and industry importance, especially since its move three years ago to Orlando preceding the Performance Racing Industry Trade Show (PRI).

This year’s AETC was held December 3-5 in Orlando’s Orange County Convention Center with the  theme, “The Power of Fuels: Winning with Tomorrow’s Fuel Technology.”

The 18th AETC featured a lineup of speakers whose race engine expertise covered nearly every level of the sport. This year’s keynote speaker was Nick Hayes of Richard Childress Racing (RCR) who was a Formula One engineer for Cosworth during Michael Schumacher’s first World Championship season in 1994. Hayes, currently heads engine development and research for RCR. While his English accent may have been difficult for some Americans to understand, he spoke the common language of racing with his presentation on “Success in Racing.” 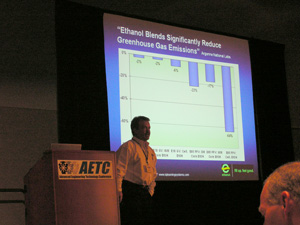 Hayes said that while there are many differences between his days in Formula One and today in NASCAR, there are also nearly as many similarities. He said that racing remains focused on people and moving metal parts better than your competitors. In his Formula One tenure he oversaw the development of many custom fuels, which proved very volatile and expensive.

Next up was Dr. Dean Hill of New Mexico State University. “Dr. Dean,” as he is affectionately known,  has been an enthusiastic speaker at many AETC events in the past and always captivates the audience with his wit and wisdom. Dr. Dean spoke about the combustion properties of Nitromethane in his presentation, “Fuel, Fuel, and More Fuel.”

David Currier, vice president of engine engineering, Toyota Racing Development, presented “Racing on Alcohol – A Review of Methanol, Ethanol and Blends Used in High Performance Engines.” He spoke about alcohol as a blend component and as a cooling agent. Currier said that alcohol-based fuels clean too well in some cases, and can attack engine parts.

The final speaker of the first day was Shell’s Global Technology Manager (Racing Fuels) Richard Karlstetter, who spoke on “Advanced and Future Fuels in Motorsport.” He said that there is a future for new fuels but fossil fuels will still dominate for a few more decades. Improved fuel efficiency will be of prime importance to racing and passenger car markets; and the key for alternative fuels will be cost effectiveness over gasoline. Karlstetter stated that bio-fuels are currently the only viable short-term non-fossil fuel option.

The other AETC speakers and their topics included:

In partnership with the AETC this year, the Motorsport Industry Association (MIA) hosted the “Energy Efficient Motorsports Seminar and Discussion” the morning before PRI’s annual Industry Roundtable later that afternoon. The MIA-hosted event brought together AETC attendees, MIA members and international motorsports leaders to discuss their ideas and the opportunities ahead that will shape the future of motorsports. 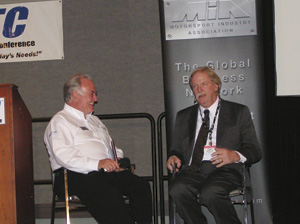