MAHLE Clevite Inc. has announced that beginning with the 2008 Daytona 500 in February, the company will begin the transition to the MAHLE white decal on the front fender of NASCAR vehicles. Emblazoned with big blue letters, the MAHLE white decal will take the place of the legendary Clevite blue decal and marks a new MAHLE identity throughout NASCAR.

“The traditional Clevite blue decal has been a hallmark of NASCAR racing for decades, representing a legacy of engine bearing technology and superiority,” said Ted Hughes, brand and communications manager, MAHLE Clevite. “But this success in performance through Clevite is not just confined to engine bearings. This tradition of excellence is also represented through our Perfect Circle, Victor Reinz and now MAHLE Original brands – all exclusive NASCAR Performance products. The new MAHLE decal, while representing Clevite engine bearings, represents a unified presence throughout our family of products.”

Advertisements in trade and consumer publications during the first half of 2007 illustrate the MAHLE decal transition to engine builders, race teams and NASCAR enthusiasts. While the Clevite blue decal is transitioned out of NASCAR, it will remain as a part of NHRA, IHRA and other drag racing events.

The MAHLE commitment to excellence is showcased by the crowning of champions in NASCAR, Formula 1, and NHRA – all in 2007. Coinciding with the decal transition, Hughes says MAHLE Clevite has expanded its commitment to motorsports by supporting NASCAR’s new Camping World Regional Series, as well as the Whelen All American Series. In addition, MAHLE Clevite will continue its presentation of the Engine Builder of the Year award throughout each of NASCAR’s National Series. 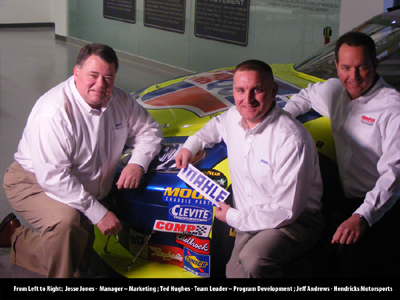