MAHLE Clevite has announced its
continued support of NASCAR by signing a new contract for the 2008
season. A longtime supporter of NASCAR racing, the company has extended
its agreement to again sponsor the Nationwide Series, Craftsman Truck
Series and at the grass roots levels of NASCAR.

Under the agreement MAHLE Clevite will enter its second season of
sponsorship of the NASCAR Canadian Tire Series, and will sponsor
NASCAR’s Grand National Camping World Regional Series and Whelen
All-American Series.

“NASCAR continues to be the premier name in auto racing,” said Ted
Hughes, brand and communications manager, MAHLE Clevite. “We have been
partners with NASCAR and its teams since the beginning and our strong
support continues. A key ingredient of our NASCAR sponsorship is to
support the weekend warriors of racing at the grass roots level.”

Hughes said MAHLE continues to sponsor the Engine Builder Showdown
where NASCAR’s top engine builders race head-to-head to assemble an
engine from bare block to running with a total pool prize of more than
$50,000. MAHLE also will present its Engine Builder of the Year award
throughout each of NASCAR’s National Series.

“The Engine Builder of the Year provides an identifiable link for
our customers to the products they use in their shops every day,” said
Hughes. “But it also helps us recognize NASCAR engine builders and
aside from rewarding them for using our products, it gives them
notoriety previously reserved for drivers and crew chiefs.”

To be eligible for the MAHLE Engine Builder of the Year award, the
team must carry the new MAHLE white decal that is being transitioned
into usage in NASCAR in 2008; and use Clevite engine bearings. 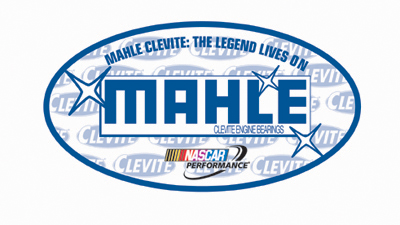