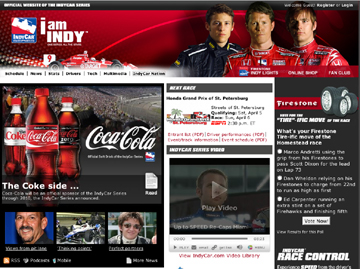 Highlighting the update is a daily TV-style show, “Up to Speed!” that reviews and previews events, showcases the players and personalities of both series and goes behind the scenes whereever both series travel.

Video and audio files from the Indy Racing League’s in-house production units – IMS Productions and IMS Radio Network – also are featured and complement the news and informational stories that have been fan favorites.

Additionally, ESPN reporter Jack Arute and IMS Radio Network host Mike King return with weekly commentaries that dive into such topics as why a driver won or lost a race. Former IndyCar Series driver and current ESPN analyst Scott Goodyear will provide commentaries during the month of May, leading up to the 2008 Indianapolis 500.

“The redesigned indycar.com Web site takes advantage of the very latest in online technology and innovation to allow us to connect with our fans in ways that simply weren’t possible in the past,” said Terry Angstadt, president of the Commercial Division for the Indy Racing League, sanctioning body of the IndyCar Series and Indy Pro Series. “The IndyCar Series has a very bright future, and this site will provide an excellent platform for fans across the country and around the world to be a part of it. It’s a great way to stay connected.”

During race weekends, viewers can watch every practice and qualifying session for free via streaming video supplemented by the IMS Radio Network’s call and live Timing & Scoring. Additionally, every IndyCar Series and Indy Pro Series race will be streamed live on the site for free.