For JGR's engine builder, it's been really early to rise - Engine Builder Magazine 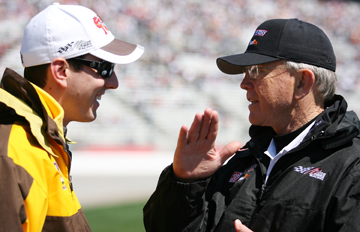 It may have seemed difficult to get in touch with head engine builder
Mark Cronquist of Joe Gibbs Racing during the recent offseason, but
that was only if you didn’t know what time to attempt contacting him.

The ideal hours for that were between 3 a.m. and 6 a.m., when he
could be found sifting through e-mails and phone messages, and
otherwise simply doing some necessary solitary thinking behind his desk
at the JGR shop.

In January, team president J.D. Gibbs called Cronquist "maybe the
busiest man in motorsports." That’s because Cronquist was in charge of
making sure the switch from the Chevrolet engines JGR had been running
previously to the Toyota engines they will run in 2008 went smoothly.

It has not been an easy task, to say the least.

"This was the worst offseason I personally have had in a long time,"
Cronquist admitted. "Just because it was trying to get the pieces and
the parts and where they go and what they are, and a part number to go
with them … just so I can give to my guys [the JGR engine assemblers]
what I need to give to ’em, you know?"

"I was coming to work at 3 or 4 in the morning and working until 5
or 6 at night most nights. And that’s Saturdays, too," Cronquist said.

The offseason is always busy for any organization fielding Cup
teams, but this one was made even more so for Cronquist because of the
JGR manufacturer switch. He said that the engineers and other folks at
Toyota Racing Development were eager to work with JGR, and vice versa,
which made for a good flow of information back and forth.

But sometimes, it was almost too much of a flood of information for Cronquist to handle.

"It was a little overwhelming at times for me," said Cronquist, a
native of Eagle River, Alaska, who got hooked on racing as a youth
while watching his father race snowmobiles. "It’s like they do so much
on the Toyota side and have so much going on, sometimes I just needed
to say, ‘Stop! Slow down. Let me digest some of this stuff. Let me get
caught up.’ Because I’ve got my side going on and their side going on,
and it’s all coming right at me."

Even when they were racing Chevrolets, JGR would break down all
engines for its cars at the end of each season. Then Cronquist would
oversee the building of 105 new engines for the next season, so it’s
not like his offseasons weren’t busy in previous years.

Plus Cronquist was heavily involved in the collaborated effort to
design and build the new RO-7 Chevy engine that made its debut last
season. That engine took nine years to go from the development stage to
the racetrack; the Gibbs switch to Toyota power seemed to take about
nine minutes, making it seem to outsiders as possibly an impossible
task to be competitive immediately.

But J.D. Gibbs and his drivers said repeatedly that they fully
expected to be competitive "right out of the box." And after Kyle
Busch’s win at Atlanta Motor Speedway on March 9, they have Cronquist
and his staff of engine assemblers to thank.

"I have no question at all that Mark will give us good, reliable
horsepower," said Greg Zipadelli, crew chief for driver Tony Stewart.

To give one an idea of what’s involved in building an engine,
Cronquist said the RO-7 is made up of 1,604 parts. A similar number of
parts are in the Toyota engine. So for the 105 new Toyota engines
required for JGR’s three Cup teams and two Nationwide teams, Cronquist
had to keep track of some 168,420 new parts that came in.

Yet Cronquist said that the switch from the Chevy engine to Toyota
isn’t at all like the painstakingly slow development of the RO-7.
That’s because the Toyota engine was used at the Cup level last season
by several other teams. Even though they experienced little success,
the basic engine was there to be provided to JGR, along with data from
those other teams that JGR could use to try to make it better.

"To me, the Toyota thing is good for us because they can go and
develop something and we can go develop something," said Cronquist, who
has headed up the JGR engine program since 1996. "Then we can come
together and say, ‘Hey, your valve spring is better. Maybe we’ll put it
in our motor.’ And maybe we have some things, that they can look at it,
too."

He said Chevy teams usually worked together only on future projects
like the RO-7 and on durability engine issues. Otherwise, the teams
worked independently of one another. He said he expects the Toyota
teams, now that JGR is involved, to work together more to get better
results overall.

When Daytona Speedweeks came upon Cronquist in early February, the
time to begin seeing how he and his engine assemblers fared had
finally  arrived. But he said then that he was more anxious to see how
the new Toyota "open" engine fared in the second and third races of the
year at California and Las Vegas than he was to see how the
restrictor-plate variety performed at Daytona International Speedway in
the season-opening event.

"California and Vegas. That’s the motor man’s nightmare. It’s cold,
it takes a lot of power, it’s 500 miles with a big gear in the car.
Those are tough ones on engines," he said.

Now, for the first time in 54 years, a non-American car has won an
official NASCAR race. Car number 18 piloted by 22 year-old Kyle Busch,
competing for the Siemens PLM Software sponsored Joe Gibbs Racing team,
came in second place on the Las Vegas Motor Speedway on March 2. On
March 9 he managed to capture the coveted first place finish at the
Kobalt Tools 500 in Atlanta, writing history as both the youngest
driver to win in Atlanta and giving Toyota its first NASCAR win.

Success could mean more sleep for Cronquist, who is looking forward
to cutting back on his hours at some point after weeks of arriving at
the office in the middle of the night.

What are we doing about this?’ And a lot of it was [Toyota doing]
things differently than we do things. We had to decide, are we going to
do things their way or are we going to do it our way? That’s what I did
during the day, so I had to come in from 3 a.m. to 6 a.m. or 7 just to
answer e-mails and get some other stuff done without all that going
on."

How they will do things going forward remains a work in progress.

"We see some good things," Cronquist said. "Our package turned out
really well. [Toyota’s] package seemed pretty good, too. Now we just
got to take ours and theirs and kind of marry the two together and use
the best of both of ’em, and see what we come up with there."