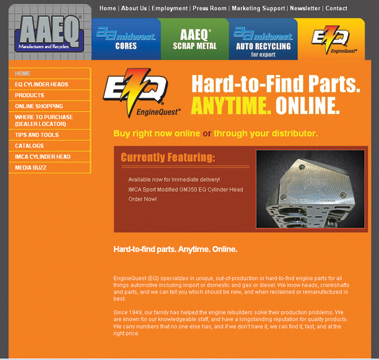 “Much of the EQ product line was developed in response to specific requests for help,” said Scott Stolberg, AAEQ’s president and CEO. “Our parts are not ‘commodities’ – they were developed to solve problems encountered every day by engine builders. We carry numbers that no one else has, and if we don’t have it, we can find its fast, and at the right price.”

EQ sources its cores from its sister company, AA Midwest, which maintains a core inventory of more than 150,000 engines and transmissions and other internal part cores. EQ specializes in manufacturing parts that either make one automotive core work in another application or replaces a hard to find or salvaged part. EQ parts are available from six national warehouses located in Chicago, Las Vegas, Spokane, Wash., Long Island, N.Y., Atlanta and Dallas.