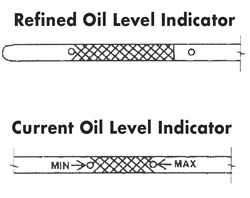 Incorrect
oil levels are being found in many 2002-2003 Ford, Lincoln and Mercury
vehicles. In most cases, the level is being misinterpreted because the
oil level on the dipstick is not touching the top hash mark at the
upper limit (or MAX mark), or it is partway down the crosshatch area.

Ford
is in the process of standardizing the marking across all vehicle
lines. The markings shown in Figure 1 were scheduled to be upgraded to
a refined marking, but both markings were still being used in many 2004
and 2005 models. Oil levels will continue to be recorded in the
crosshatched area of the blade, between the upper and lower limit
holes. Vehicles with engine oil levels falling within this area are
acceptable and do not require topping off.

Service Procedure For Your Installers Customers

Ensure
the vehicle is sitting on level ground. Set the parking brake and make
sure the transmission selector lever is in the Park position or in
First gear on manual transmissions. The engine must be off.

The
best time for determining oil level is after the oil has had sufficient
drain-back time to the sump. If the engine has been running, allow it
to sit for a few minutes turned off. An oil drain-back period is
required before taking an initial reading.

If
the level falls below the lower hole, fill with one quart of oil. If
one quart is insufficient to raise the level above the lower mark, add
oil until it records within the crosshatch area. Use caution during
this procedure as some time is needed for oil to drain down through the
drain-back passages in the cylinder head to the oil pan. Adding oil a
quart at a time repeatedly without sufficient drain-back may overfill
the sump.

If the oil level falls between the upper and lower
holes, do not add more oil. Adding an extra quart could cause
over-filling and may result in aeration (foaming) causing eventual
damage to vital bearing surfaces and moving parts inside. Over-filling
will require some oil to be drained until the indicator shows the level
between the upper and lower holes of the blade. An extra quart of oil
should never be considered as additional lubrication protection for the
engine.

Rich
Diegle is technical editor at ALLDATA. Diegle is an Advanced Engine
Performance Certified ASE Master Technician with an AA degree in
automotive technology and 23 years of dealership and independent shop
experience.