Traditionally, diesel engines are known for their long life, fuel economy, and efficiency in getting large loads from place to place. Diesel engines equal gasoline engines in horsepower per cubic inch, they have double the torque of gasoline engines, and they can achieve up to 40 percent better fuel economy, making them ideal for use in the “big rigs” that deliver goods across the United States. What they are not known for, by and large, are their high performance tendencies.

The timeline of the diesel engine is long and rich. Rudolph Diesel invented the first diesel engine in 1892 and in 1893, Diesel published a book “Theory and Design of a Rational Thermal Engine to Replace the Steam Engine and the Combustion Engines Known Today” in Germany. In 1894, he filed for a patent for his new invention.

Rudolf Diesel was nearly killed by his own engine when it exploded. However, it was the first that proved that fuel could be ignited without a spark. Diesel operated his first successful engine in 1897 and in 1898 was granted patent #608,845 for his “internal combustion engine,” the Diesel engine.

While you have been able to find diesel engines in performance applications here and there, about the only place they have enjoyed steady use is in the sport of Tractor Pulling. Familiar to many is the image of the farm tractor dragging the pulling sled down a track.

Other organizations have sprung up the past few years to sanction competition for diesel-powered vehicles, catering, in particular, to the diesel-powered pickup trucks. The Diesel Hot Rod Association, The National Hot Rod Diesel Association, and The National Association of Diesel Motorsports each sanction diesel drag racing and sled pulling. These organizations feature everything from 17-second farm trucks to rear-engine diesel powered dragsters that run the quarter mile in the 7-second range at nearly 200 mph!

Straight-line racing is certainly a popular type of motorsports, but tractor (or truck) vs. sled is not the only option. Diesel racing vehicles can actually turn. In fact, you may be surprised to discover that diesel engines have been used in the Indy 500 on several occasions.

In an effort to promote his fledgling engine business, Clessie L. Cummins talked Indy 500 race officials into allowing a diesel-powered entry in 1931. The car qualified at the slowest speed to make the race, but Cummins’ main objective was to showcase the durability of his diesel engine. He accomplished that goal as the car completed the entire 500 miles and finished 13th.

Cummins brought diesel-powered cars to Indy three more times, and even won the pole position with the fastest qualifying speed in 1952. Although the car failed to finish the race, Indianapolis officials made rule changes after that 1952 race that rendered the diesel uncompetitive. A diesel engine has not competed at Indy since…but that could change in the near future.

The American LeMans Series, a road racing series here in the United States, has been dominated by the Audi Team which, in 2006, won its first race with the diesel-powered R10. Since, Audi has gone on to capture 45 Class victories including 22 in a row that dated back to that first victory at Sebring.

The SCCA has debuted the VW Jetta TDI Cup for 2008, a program based on the popular European Polo Cup. The Jetta TDI Cup car is powered by a 2.0-liter, four-cylinder TDI clean diesel engine. The car is slightly modified from stock with race suspension and brakes, plus a six-speed, double clutch, automatic DSG transmission.

Thirty drivers are competing in this series to drive the identically prepared diesel powered Jetta’s. Not only will this series provide a training ground for young drivers, Volkswagen will be using the series to promote its “clean diesel” technology.

Much of the technology that is developed in racing eventually finds its way into passenger vehicles. Expect that to be true for diesel technology also. What manufacturers are learning from racing, they are applying to street vehicles.

Available performance enhancements for street diesel vehicles come anywhere from computer programmers to alter the factory programmed fuel curve, to all out performance enhancing internal engine modifications. And while there are hundreds of businesses catering to the diesel performance customer, we have just touched the tip of the iceberg. If you are involved in engine work, particularly diesels, it would be a great market to jump into.

Changes in diesel technology, along with advances in computer engine controls are beginning to allow a second look at diesel engines for use in passenger cars and light trucks. While there has been limited use in passenger cars in the United States – the Volkswagens come to mind – the diesel engine has been common in Europe for years. Domestically, diesel engines are beginning to be offered as options by several manufacturers and in the near future, they will probably be available from nearly all makes and models.

As diesel engines become more popular in this country, the market for performance enhancing parts and services will continue to grow. Need proof? Just take a look at the growth of the performance market growth serving the Dodge Cummins-powered pick-up trucks, the General Motors Duramax, or the Ford Powerstroke.

The aftermarket has exploded with performance add-ons for diesel pick-ups, and numerous consumer magazines have popped up that are dedicated to diesel pick-up performance. And while performance enhancements have been common for RV’s and RV tow vehicles for many years, the biggest growth has been from owners that use their trucks for everyday use, then use them for play come the weekend.

Much of the growth in diesel performance has been based on the evolving technology that is used in tractor pulling. Tractor engines that came from the factory rated at perhaps 150 horsepower, are putting out upwards of 2,500-3,000 horsepower on a pulling tractor. Stock, these engines never saw much more then 2,400-3,000 rpm, but in tractor pulling use, they are seeing as many as 8,000 rpm.

To achieve these numbers, very little is left of the stock engine other than the block, depending, of course, on the class. While most rules dictate the use of a stock block that was available for that particular model tractor, some blocks are no longer available new, and junkyard blocks are getting harder to find. Several performance companies are now manufacturing aftermarket blocks for these instances.

Nearly every other part used on a pulling engine is an aftermarket piece including the heads. While some classes may use a few stock parts, the top diesel classes will have aftermarket rods, pistons, rocker arms and push rods, among other parts. Stock parts will just not hold up.

Tractor pullers were probably the first to use multiple turbochargers, in fact, National Tractor Pullers Association Diesel Super Stocks are allowed up to four. The Super Semis are allowed any number and there have been cases where pullers have experimented with up to eight turbos.

Compound, or twin turbo setups are now available from the factory with the diesel engine option and the aftermarket companies have been manufacturing compound turbo kits for most of these trucks.

Turbo boost on diesel engines is unlimited, although get too much and the engine can come apart. In tractor pulling engines, boost pressures of up to 200 psi can be found depending on the class or division. These pressures are such that engines have literally blown the tops off. I am talking about from the oil pan up, leaving the piston and rods, etc. behind. Therefore, in practical terms, there are limits, but the limits are not determined by the fuel.

In addition, while we are talking about turbos, those used in pulling are not your everyday off-the-shelf units. Several manufacturers and shops specialize in turbochargers for pulling and the aftermarket.

Increased boost and increased fuel also bring about an increase in the Exhaust Gas Temperatures (EGTs). Go a little too far, and you can start melting down your engine. Truck and tractor pullers use water injection to help control the EGTs and it is not uncommon for a tractor to use up to 5 gallons of water on a 300-foot run. An added benefit of water injection is that if it is injected into the air charge it helps to increase power by increasing the density of the air charge. A denser air charge can handle more fuel, thereby making more power.

To make the most power, you also want to get the highest operating temperature possible and like most things in Motorsports, there is a fine line between maximum performance and disaster. Between 1350° and 1400° F is ideal. And, while there have been instances of up to 1500° F temperatures, above 1400° F you’ll begin melting parts.

Of course, when you think about diesel engines, you automatically think about the black smoke and smell that diesel engines produced in the past. In many diesel Motorsports, particularly tractor pulling, that may still be true. In fact, in tractor pulling circles, the diesel-powered classes are known as “smokers” and are very popular classes; the billowing smoke from these tractors can reach hundreds of feet high.

For the most part, that black smoke is mostly unburned fuel. Like any internal combustion engine, you try to cram as much air/fuel into the combustion chamber as you can; the bigger the air/fuel charge, the more power you will make. While it looks impressive, and the fans love it, and while those engines make tremendous amounts of power, they are not as efficient as they could be.

Like a gasoline engine, a diesel also needs to have the ideal air/fuel ratio in the air/fuel charge. So as not to be confused, unlike a gasoline engine in which the air/fuel charge is compressed in the cylinder, and then ignited by the spark plug, in a diesel engine, only air is introduced into the cylinder during compression. As the air charge is compressed, it creates heat. When the fuel is injected into the compressed and heated air charge, the mixture is ignited creating the compression stroke.

Getting the ratios right are the key to greater efficiency in a diesel engine. The advent of computer engine controls is making possible “clean diesel” engines, technology that is already being used by Audi and Volkswagen, among others. Standing next to the Audi R10 TDI when it is running, you will not notice any difference than if you were standing next to your Toyota Camry.

According to Kyle Novak, program manager for the new SCCA VW TDI Cup Series, the cars are so quiet that you may not know the engines are running and they’re so clean that emissions are certainly not an issue. If fans are thinking of the old passenger car diesels of the 1980s, they may need to be reeducated about what a diesel is capable of today.

Manufacturers are developing the technology that not only makes the diesel clean burning, they are also making them as quiet running as a gasoline motor. Perhaps that is just what is needed to get Americans to take another look at the venerable diesel engine. Perhaps motorsports will be the thing that makes us realize our first impression is worth a second chance. 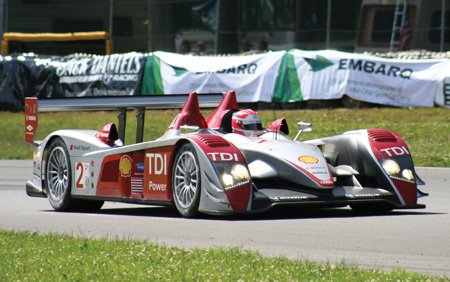 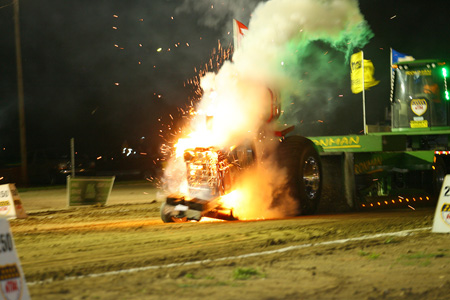 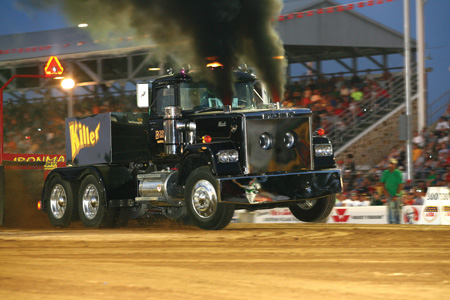