Ed Justice, Sr., the last of three brothers who founded Justice Brothers, Inc. which would become a worldwide manufacturer and distributor of car care additives, lubricants and cleaners, has died. He was 87. Justice died August 30, 2008 of complications due to kidney failure in Arcadia, California, said son Ed Justice, Jr. With $2,500 profit from a racecar they built in their garage, Justice and his brothers Zeke and Gus started Justice Brothers, Inc. in Southern California. In turn, it was built into one of the world’s leading brands for professional mechanics and consumers.

When Justice retired 20 years ago, the company manufactured 13 products, today the product line numbers in excess of 100. Zeke concentrated on the mechanical side and the formulation of the products while Gus handled the accounting and money side. Gus retired from the business in 1974 and Zeke retired in 1980. Before the founding of Justice Brothers, Inc., Justice and his brother Zeke worked for the legendary Indianapolis racecar builder Frank Kurtis in Glendale, California. While there, they built and fabricated racecars for the biggest names in racing at that time. It was through these friendships that the oil business would later benefit.

After starting Justice Brothers, the brothers went on to win the 1950 Indy 500 sponsoring their former boss Frank Kurtis’s entry. When they moved to Jacksonville, FL, they got involved with stock car racing and helped start NASCAR in late 1947 and became one of the first sponsors. Cars they were involved with won the 1950 Southern 500 and the original Daytona Beach stock car races. Justice was inducted into the West Coast NASCAR Hall of Fame in 2008.

From the youngest age, Justice had shown a great interest in all things mechanical and in particular the automobile. His first business was renting bicycles, which he and his brother Zeke had re-built, to the local towns’ people in their hometown of Paola, Kansas. Justice and his brothers invented the world’s first transmission stop-leak and many other innovative products in their field. “My dad and his brothers were stereotypical Midwesterners who came to California to find a better life, and they did. The big reason for their move to California was because it was the center of hot rodding and Indianapolis style racing, with most of the top car builders located there. They knew they had to be part of this”, said Ed Justice, Jr.

Justice was the only brother of the three to serve in the military during World War II. He was a member of the 8th Air Force, stationed in England. Justice was known as a salesman’s salesman and always stated you needed a quick step and a firm handshake to get ahead. Because of this, he was known as the most visible of the three brothers. This led to Justice appearing in live broadcast television commercials in Jacksonville, FL, at the very beginnings of the medium. Justice and the company became part of the landscape across the United States and in particular a television icon in Southern California. Every commercial was ended with what was to become the well-known phrase “Tell them Ed Justice sent you”. 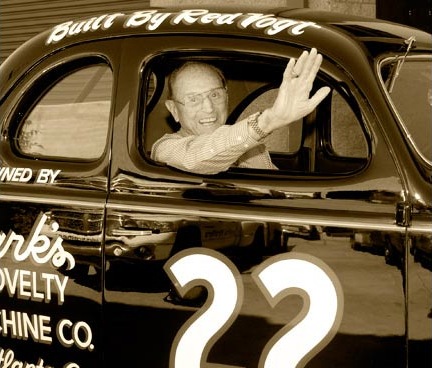