While the economy stalls – enthusiasts are building “Rat Rods” in record numbers.

Right in the middle of the economic slowdown and our government’s bailout of Wall Street, a little West Coast car event called the Primer Nationals was taking place in Ventura, California. Did the hard times affect the turnout or enthusiasm for this dominate new hot rod culture? Heck no! In fact the event has grown to more than 500-600 cars, and the spectators swarmed the fairgrounds by the thousands.

Lots of primer, rust and pinstripes surrounded an array of engines from “Nailhead” Buicks to Flathead Fords, inline sixes and even a straight eight or two. Many owners have adopted the look (tattoos, dress and hairstyles) as their new identity. The point to you and small, custom engine shops around the country is that these people will spend money on their lifestyle (hot rods), regardless of the economy. And the movement will only be limited to the availability of vintage engines.

So how do you make money on the Rat Rod craze? First you need to be flexible enough to rebuild anything from an old Buick Straight 8 to an early Chrysler Hemi. These folks are not looking to squeeze the last drop of horsepower out of their engines, but they want them to run strong, and more importantly, to look and sound the part.

What you have to realize is that each Rat Rodder wants to be different and to stand out. Some will want their engine nicely painted, detailed and decked out with some polished or chrome accessories. Others will go for 60-year-old patina with paint flaking off the block and valve covers and some grungy piece of archaic speed equipment on top. Take the time to fully understand what your customer wants the final result to be.

From an engine builder’s perspective, building Rat Rod motors can carry the same high profit margins associated with racing and ultra performance engines, simply because of the time and attention to detail required. There’s a couple of ways to get started on an engine build for one of these vehicles.

The first, and probably the easiest is for the customer to supply the engine core and any unique external speed equipment he may have. Another avenue is for you to supply the core and even locate or fabricate what’s needed, such as a multi-carb manifold or in the case of an inline six, converting the single exhaust manifold to dual outlets.

The thing to keep in mind is that anything goes, and the wilder the better. An early Chrysler Hemi with eight Strombergs bolted on a “log” manifold is a perfect example. A typical Rat Rodder might have six of the carbs blocked off and run the engine on just the middle two carbs. It’s your job to come up with an engine combination that will run well and be jaw-dropping to look at.

So which engines are the mainstay of the Rat Rod movement? Nailhead Buicks and early Oldsmobile Rockets have a big following, Flathead Fords are popular and the early Chrysler Hemis are king. The more obscure motors such as Ford Y-Blocks, GMC inline-sixes and Buick straight-eights are sought after too.

There is a goodly amount of factory and aftermarket speed equipment trading hands on eBay and at local swap meets. Many times the genesis for an engine (and car) begins with laying your hands on that rare piece of speed equipment. Surprisingly, many companies are reproducing vintage speed equipment, which is a great way to go if possible because it is one less thing needing rebuilding.

The essence of Rat Rod engine building is to approach it much like the early hot rodders did. If a piece of speed equipment wasn’t commercially available, they built it themselves. As we all know, straying from known procedures can run into massive amounts of time invested. If your customer wants you to convert his one barrel carb manifold into a two carb affair, maybe the local machine shop would be better equipped to make the conversion.

Packing your customer off to the machine shop with the manifold takes that great unknown out of the financial equation. However, if your shop has those fabrication resources, this kind of work can serve as its own profit center. It’s something that must be decided on a case-by-case basis.

I’ve talked a lot about the cosmetic requirements to satisfy these customers. Another important area is “sound.” These engines need to have a nasty idle, good throttle response and cackle a bit through the exhaust. The idle is camshaft-related. Companies like Comp Cams realize this and have introduced a series of “Thumper” cams that are promoted as having mean-sounding idles. But virtually any cam with the right amount of overlap will give you the same effect. The most famous camshaft of all time, the 097 Duntov, had one of the meanest idles even though it was an extremely small cam by today’s standards.

These high-overlap cams usually have pretty low manifold vacuum, so make sure the carburetor’s power enrichment circuits are adjusted to these lower manifold vacuums, or you will have a miserable, fat-running engine.

A couple of areas of concern internally are the compression ratio, cylinder head flow and a few incidentals such as rope rear main seals. Most ’40s and early ’50s engines had extremely low compression ratios – think 7:1. A set of custom pistons, some head and deck milling or, in the case of flatheads, a set of high compression heads will do the trick. Don’t go crazy: 9:1-10:1 will work fine and still run on pump gas (remember, fast-burn combustion chambers weren’t commonplace).

Next, do some basic bowl work under the valves and a good three-angle valve job will help. Also, high-performance replacement valves have more modern shapes and flow a little more air. Like I mentioned before, these engines are not about all-out horsepower, but they should slam you back in the seat. After all, it is a hot rod!

Some of the details like rope rear main seals make building these engines a challenge some times. Many manufacturers make modern rear seals for some of these engines so check the Internet out first. Also, head gasket sealing can be a problem on some engines. Use good bolts and look for an MLS gasket first. If none are available an O-ring with solid copper gaskets may be necessary – especially if a supercharger is involved.

Another area of huge improvement for these early engines is a hidden electronic ignition module with a matching high-output coil. It eliminates the breaker points and battery-only input, and it still looks like the original ignition system.

Another area hidden from view is the lubrication system. Some of these early engines are severely lacking in this area. Start out by using quality main bolts or studs, grooved main bearings and cross drill the crankshaft if it isn’t already cross-drilled. Use the highest volume and pressure oil pump available and shim the relief spring if the running pressure is not at least 50psi. Most of these motors came without oil filters so a remote oil filter is a good addition.

Cooling has always been a big issue with early engines, especially flathead Fords. A good way to go is to simply gut the stock water pump (remove the impeller and use one of these new in-hose pumps that move enough coolant to get the job done.

There you have it – a potential new profit center that will never be replaced by some crate motor program. The creativity and individuality of Rat Rodding puts the small local engine builder back in the picture. Check out these photos and others from the the recent Primer Nats in SoCal   and let your imagination start to reel. A few of these projects might actually be fun, too. 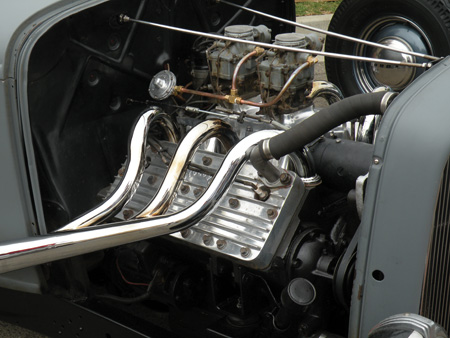