The Hemi has made a comeback in recent years in various Chrysler and Dodge vehicles, most notably in the Charger and Challenger. But for hardcore Hemi fans, the real deal goes back to the first-generation 331/354/392 mills that culminated in the “Elephant Motor,” the 426 Street Hemi of the Sixties and Seventies.

Even though the first-gen engines are now history, the basic 426 Hemi has lived on for years in aftermarket form. Heads and other engine components have been around to meet the needs of enthusiasts needs, but only recently have Hemi blocks become available.

The chromemoly-sleeved aluminum block, splashed off an original cast-iron block by HP Products, features a number of upgrades and improvements, VanGordon points out. Aside from the obvious increase in displacement (with both a bigger bore and stroke), it also has a thicker water jacket, enlarged oil-galley holes, sleeved cylinders, and beefier webs in the lifter valley. In addition, the oil-pump pickup was moved outward from the counterweight for clearance, eliminating the need for an external pickup.

Using a thicker, conical-shaped pushrod also required bigger clearances. On the older 426 Hemi, “The valvetrain geometry was pretty barbaric back then,” VanGordon notes, so hydraulic lifters and other modifications were done as well. In particular, Stage Five rocker arms eliminated the problem of “scruff” on the valve stem. He points out that the rockers’ ride was originally too far past center on either side—instead of on dead center—which caused the guides to wear out.

While this much naturally aspirated horsepower is an impressive achievement by any measure, the Hemi block can probably support larger displacements, as much as 572 cubes (without having to raise the cam), so the power potential is mind boggling, especially with a blower bolted on top. The block is available with either a 4.500?- or 4.600? bore diameters and can except a crank with as much as a 4.250? stroke (anything longer would require an external oil pickup).

The following are additional build tips for this engine. In some cases, the photos accompanying this article show the buildup of a 440 Mopar cast-iron block, not the Hemi, but Jim VanGordon says the principles of the installation are the same.

• Pay attention to the differences between the thrust bearing and the standard one. The flanges on the thrust bearing have oil passages added to them, and the ends are beveled as well. The center bearing is the most important, because it handles stress from four different angles, hence the need for a precise fit and extra oiling.

• Details make all the difference. Or, in this case detailing does. VanGordon deburrs the corner of the thrust bearing in the center of the block to remove any “dingleberries or stalagtites” as he calls them. Otherwise the thrust bearing might not seat properly, and cause wear.

• At the end caps, the neoprene rear main seal protrudes slightly. Don’t cut off this extra piece. The excess crushes the seal together to prevent any gaps or leaks.

• Since aluminum blocks are somewhat softer than cast iron, VanGordon lowers the crankshaft in slowly and evenly to avoid scoring the walls.

• Before installing the crankshaft, apply engine oil to all the bearing surfaces. VanGordon won’t use white lithium grease, because he says it can clog the filter.

• Here’s a simple but really essential step: set the thrust bearing by tapping gently on each end of the crankshaft.

• Use a Plastigauge to check the clearance. After placing a small thread of wax on the bearing surface, torque the cap to see how much it spreads under pressure. Then measure the crush width. Ideally it should be 2.5 to 3 thousandths.

• VanGordon torques the main caps in three increments (40, 80, and 105 ft.lbs.) to allow the bolts to “de-stress” or settle in, rather than trying to tighten them all the way on the first throw.

• Check endplay with a pair of screwdrivers and dial indicator – .006? is ideal. Also, spin the crankshaft by hand. It should spin smoothly and easily, with no drag.

• VanGordon uses two types of rings: radial Moly (or a “round ring”, as old timers say) and square edge. The rounded one is the upper one, and is more forgiving and designed to prevent detonation. Even though it allows a bit of oil usage, it won’t bind in the top ring land. The stainless steel square-edge ring below it is for scraping off oil from the cylinder wall with a squeegee action.

• Check the end-gap of the rings. VanGordon tends to leave a bit more room on clearances in older engine designs such as this one, in order to allow for expansion once the engine heats up.

• The piston top is chamfered for valve clearance. This particular engine has a static compression ratio of 10.5:1, so it can run on 91-octane pump gas. VanGordon modifies the cam profile on the exhaust duration to compensate for the comparatively high compression ratio.

• Apply a dab of 30-weight oil on both the ring land and in the bore so it’s not a dry fit.

• Use ring compressors to seat the rings in the land and make installation in the cylinder bore easier.

• When installing the piston, set the crank at BDC to keep the rod throw away from the bore and prevent any damage.

Add oil to the bolt heads before bolting on the connecting rods. This makes it easier to torque them and check the crush, which should be about .003? for a performance engine. Don’t use an air wrench either. A manual speed wrench prevents binding on the cap, and lets you “sneak up” to the correct torque setting.

• Check the deck and TDC marks, and also double-check clearances on any machining, before degreeing the cam and installing the heads.

• After placing on the heads, use Loctite on the bolts.

• Be careful not to nick the cam bearings when inserting the camshaft. The Isky camshaft used in this build had an aggressive street grind done specifically for the Mr. Norm Hemi Dart.

• Hydraulic lifters in the valvetrain eliminate the valve lash that the older Hemi is known for. VanGordon also reduced the cushion in the lifter (from .0080? to .0025?) to minimize lifter bleed-off when restarting the engine, and to reduce wear on the cam.

• Pushrods on the early Hemi engines, measuring 5/16?, were a weak area. As indicated earlier, the pushrods on this 528 Hemi are beefier and have a conical shape as well.

• A Milodon oil pan was used to increase capacity from five to nine quarts.

• The oil pump pickup was relocated outward from the counterweights so an external pickup would not be required.

• The thickness of the intake gasket, should measure .0060?.

• When bolting on the intake manifold, go from the center outward so it draws down evenly on the block.

The lessons to be learned from VanGordon are simple: be very, very good at what you do and how you handle people.

“In the collector car business,” he says, “it’s all word-of-mouth. You can’t burn any bridges.” VanGordon doesn’t advertise, doesn’t rely on his Web site, people just walk in the door. “Guys will come in with a $4,000 budget, a pile of parts in the back of his pick-up and want the most horsepower he can get. There are small things you can do to an old engine to get more out of it. We know how to do that.”

Considering the rich history of the Hemi on both the track and street, this 528-cube mill could usher in a new era of Hemi hot rodding. The trick is to build it right, and following the example of an expert like Jim VanGordon is a great place to start. 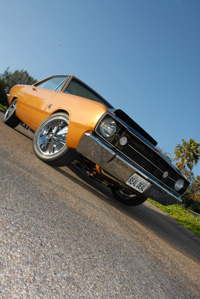 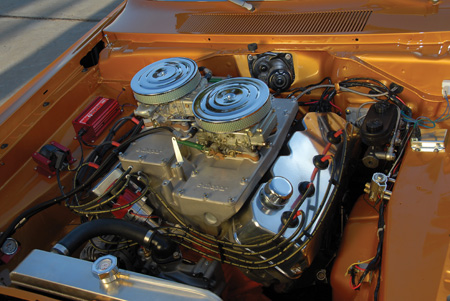