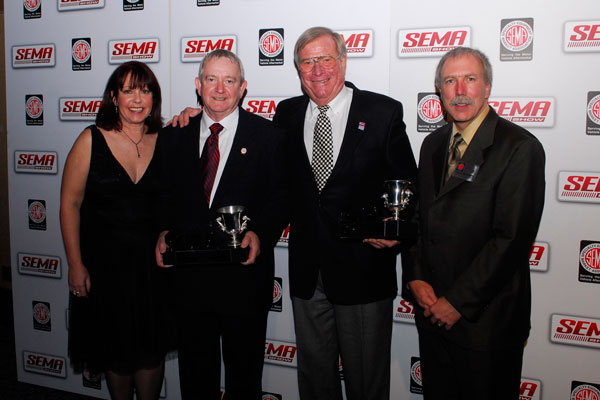 The PWA recently honored Bob Cook as PWA Person of the Year during
the 2008 SEMA Industry Awards Banquet. Like many of his colleagues,
Cook developed his passion for the automotive industry at an early age,
and turned it into a lifelong career.

“I’d always liked cars,” Cook recalled, “and when my brother got out
of the Navy, he came home with a primered ’51 Mercury that we took to
the drag races. Of course, a flathead Ford engine with a two-barrel
carburetor was not very fast, but it got us started. My job at the time
was to take the street tires off and put the slicks on. I was the pit
crew.”

Transitioning from the racing field into the business side of the
industry, Cook decided that with a few years of rep experience under
his belt, he would open his own agency in 1979. And what he may have
lacked in capital he made up for with his first two clients – Vic
Edelbrock and Bob Vandergriff.

Despite representing two of the pioneers of the specialty-equipment
industry, it was still an uphill battle to keep the new agency afloat.
The perseverance eventually paid off, however, as his company grew from
just himself to a two-man and finally a 14-rep business. In
appreciation of the many mentors and colleagues that contributed to his
success, Cook began to give back by helping to foster the industry.
When he wasn’t on the road or working at his own company, he devoted
himself to SEMA and PWA projects.

PWA Manufacturer of the Year: Edelbrock

At the SEMA Industry Awards Banquet during the 2008 SEMA Show, the
PWA honored one of those founding companies by presenting Edelbrock
with the Manufacturer of the Year award.

The Edelbrock story begins with Vic Edelbrock Sr., born in Wichita,
Kansas in 1913. By age 14, he was contributing to his family by working
at an auto repair shop. In less than five years, Edelbrock Sr. took his
newly acquired skills and moved to California where he opened a repair
shop on Wilshire Blvd. with his brother-in-law.

Vic Edelbrock Sr. would continue to grow his business until the
early age of 49, when he succumbed to cancer. Despite this tragedy,
Edelbrock Sr. left behind a tremendous team of very talented people. The year was 1962 and the Edelbrock Equipment Company was handed over
to Vic Jr. and a group of loyal employees, most of whom had been with
Edelbrock Sr. since the beginning. They knew what it took to continue
the traditions he had begun.

As a testament to the Edelbrock team’s commitment to excellence and
Vic Sr.’s dream, the corporation now has over six locations: four in
Torrance and two in San Jacinto, California, totaling more than 600,000
sq. ft. Headquarters include R&D, manufacturing, tech support and
more.