Despite these automated times in which we live today, many shops still use manual cleaning systems to hand-clean each engine component piece by piece. This may seem slow and tedious to some, but for others it’s necessary quality control in order to remove all of the hidden particles that can cause damage to an engine and eventually lead to a comeback.

Cleaning each part by hand, as slow and methodical as it may be, certainly allows you to see what you are cleaning and to inspect for any other damage or debris that may exist. We are all familiar with the solvent cleaning systems that have been around for decades. These systems use a certain volume of chemical in which the part is either soaked or sprayed by a nozzle at low pressure. These systems are not as prevalent as they used to be as newer environmentally friendly systems have more or less taken their place. However, the need for manually cleaning parts has not gone away.

Sometimes the only way to get a part clean is by using a manually operated blasting media to remove stubborn oils and hard, baked-on carbons. Manually operated blast systems such as a glass bead machine, for example, direct a high-pressure stream of glass media at the surface of the part. Bead media does produce a nice and clean looking finish, but it can be difficult to remove the media afterwards in some cases. Glass media can also become embedded in the surface of aluminum components, due to its soft metal characteristics. 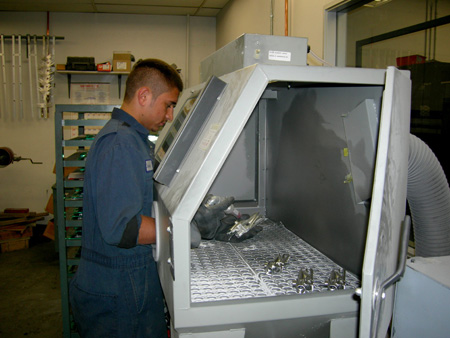 Some engine builders prefer to clean their engine parts as much as possible in automated systems such as a thermal cleaning oven and airless shot blaster before taking the part to the abrasive blast media. There are several types of blast media and systems because different metals have different needs. Aluminum, for example, requires different types of blast media than cast iron, and that can be seen throughout the engine.

Aluminum parts can finished by blasting with plastic media, which doesn’t distort or damage the metal, and does a great job removing dirt and carbon. But it does not remove stains.

Another type of blast media used to remove deposits is silicon carbide or aluminum oxide. Engine components caked with baked-on mud may require blasting with aluminum oxide to get clean.

Manufacturers of shot and bead blasting equipment say their approach is the most environmentally friendly of all because it doesn’t use any chemicals, detergents or water, and generates no VOC emissions or chimney emissions. The dust and cleaning media residue that’s generated by abrasive cleaning can be separated and collected by filtration, which reduces and condenses any potentially hazardous material that must be disposed of.

Soda blasting equipment uses a form of baking soda media for removing baked-on carbons and sludge, and is another option for components that are too difficult to clean using other systems. System makers say their products can safety clean many components without damaging sensitive substrates.

These systems are “one pass,” meaning the media is not reusable. Soda media is water-soluble so you don’t have to worry about blasting away in hidden passages. Soda breaks and becomes “fractured” when it hits the surface of the part, turning into a fine particle that can be simply washed away.

Some shops use a soda blast system for spot cleaning purposes. Many shop operators tell us they blast the most difficult areas with the soda and then allow their other systems to clean the rest of the component.

Because it isn’t reused, the cost can be a little bit higher with soda but it also can save labor time due to the fact you don’t have to mask off anything or pre-wash the parts. And by minimizing how much they use the system, some engine builders say they are able to keep the cost down.

The aerospace industry uses a lot of aluminum components and other more exotic metals, so it is imperative to clean these components without damaging them, and to inspect for further damage. One system that has been used for a while is a wet slurry blaster. The wet slurry blast system basically mixes water and an abrasive media together into one solution in a sump, which then sends the mixed solution to the nozzle.

The slurry solution can be either used in a manually operated blast cabinet or in an automated system with multiple nozzles. A more scaled down system has been introduced into the automotive industry, but it can be quite expensive and probably out of reach for most two man shops. However, with the amount of aluminum components in today’s engines, a wet slurry system may be a more attractive option for some of the larger production shops.

Unlike a sandblast or dry-blast process that strikes the part once and ricochets away, the slurry scrubs the components clean. Because the water surrounds the media it protects it from becoming embedded in the surface itself. The system can do extremely fine cleaning as well as remove scale, carbon buildup and get into all the nooks and crannies. The system can also handle parts with oil and grease on them, eliminating the traditional steps of washing and drying the parts before putting them into a dry blast cabinet. With a wet slurry system you can do that all in one process.

One of the advantages wet slurry blasting has provided to the aerospace industry is its capability for exposing very fine cracks in a casting. Blasting a casting with a traditional media blaster might actually push the top edges of a microscopic crack together, making it impossible to see even with magnetic particle inspection. With slurry blasting the water gets in there and it will actually clean out that crack, leaving it exposed for inspection.

You still must rinse and thoroughly inspect the part afterwards to be sure all the abrasive media has been removed. One manufacturer says it is addressing this problem by adding a secondary rinse system, which will be tied to the machine as part of the filtration package. It’s a closed-loop system that includes a filter to separate the oil and waste.

Automated spray washers clean parts without any manual scrubbing or brushing. Most spray washers use V-jet nozzles and a stationary manifold system to direct water at parts sitting on a turntable inside a cabinet. On some washers, the parts are stationary and the nozzles rotate to vary the spray pattern. Power or pressure washers, by comparison, operate at higher pressures to dislodge dirt and grime and use much larger nozzles. Some washers use a water wheel rather than a pump and nozzles to wash the parts. Either way, the parts come out clean and are ready to machine in most cases.

For water-based systems to clean effectively, they usually need heat. The recommended temperature range will vary according to the type of equipment and chemicals used, and may range from 105° up to 190° F. If the water temperature is too hot, though, water loss due to evaporation may become a problem requiring more make-up water to maintain the cleaning solution.

Some engine builders say that they use high-pressure spray washers primarily for aluminum parts because these components can’t handle the high temperatures in a thermal cleaning system like cast iron can. These systems do a great job on cast iron parts.

No matter what systems you use to clean, most engine builders follow up with a manual process of either shot blasting or pressure washing. Manual cleaning engine components remains an important step in the engine building process for inspection and final clean.

Whether you are removing accumulated crud or just washing off new parts after machining them, engine builders should review their cleaning procedures periodically to make sure they are working well and there is no debris left behind. You may find that you can save money or time or both by changing equipment, media or chemicals. There is no excuse to keep cleaning parts the same old way you’ve always done it if there are better options available.