We’ve all heard the stories and urban legends about old classic cars being found in someone’s garage or estate. Typically, the story goes, the owner just passed away, and his widow had no idea what was in the barn. Sounds too good to be true but it happens. One such story that recently grabbed headlines was that of an old doctor who died at the tender age of 92, leaving behind his beloved but forgotten 1937 Bugatti Type 57S hidden in his garage since he parked it there in the early 1960s. This car was a rare gem, and in its day it was capable of reaching speeds up to 130 mph when most cars at that time could barely top 50 mph. The car was in unusually good condition for a “barn find,” so it didn’t need many replacement parts, which is a true rarity. The Bugatti ended up selling at an auction in Paris for a cool $4.4 million, which is even more rare. 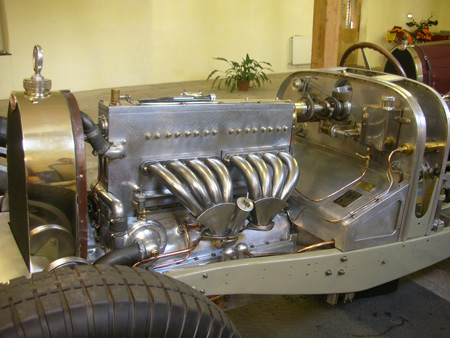 Cars like the Bugatti are indeed special, but most restoration projects aren’t worth anywhere close to a million dollars. Despite what you may see on Barret-Jackson, there are a lot of restoration enthusiasts who will spend the money to do it right, but who also, especially in these trying economic times, are not going to go crazy with their wallets. Good times or bad, there is still work to be had, and engine builders who are interested in making old things new again may find that the restoration market is very much to your liking. But, like the vehicles themselves, it takes a rare breed to bring these engines back to life.

Engine builders who specialize in old engines know that it’s a niche market that won’t go away as long as America continues its love affair with the automobile. Baby boomers are getting older and many of them are wanting to buy their childhood cars to drive the wife around at car shows and cruise-ins. There are car clubs for nearly any make and model of car. And many who are involved in these clubs see them as much of a social gathering as a swap meet. It’s a lifestyle. 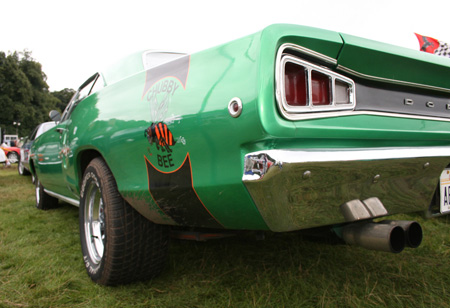 True restorations, according to experts, have original paint, original interior, and numbers matching engines and chassis. At car shows these “original” vehicles are judged on a 100-point scale. A “100-point car” is one which has 100 percent of its original equipment, down to every nut and every bolt. Some restoration experts say hot rods, street rods, and customs cannot be considered true restored vehicles because street rodding and customization is about transformation. 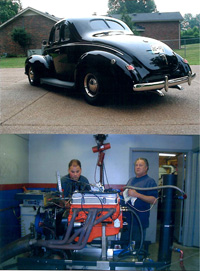 Resto-rods are mildly customized older cars. The majority of the vehicle’s features are restored to their original condition, with updated powertrain and suspension. They are sometimes distinguished from fully restored cars by their custom wheels, larger engines or metallic paint jobs. Today “Resto-Mods” are becoming more popular, combining OE style with the most desirable aftermarket accessories.

“The evolution of the restoration market has been the rat rod, resto-mod, resto-rod car culture,” says Mandlin. “Old school hot rods continue to be popular. Some of the most popular engines are 348/409, 216/235 Chevy, Nailhead Buick, Flathead Ford, Hemi engines, and 331/365/390 Caddys. These engines have a nice look to them and cores are still available at car shows and swap meets.”

Some experts think that resto-mods and resto-rods may become more common than a fully restored vehicles because people like to customize things to their liking. Aftermarket wheels/tires, steering wheels, paint, engine/transmission upgrade, disc brake conversions, interior, etc. all serve to make the vehicle more driver friendly. 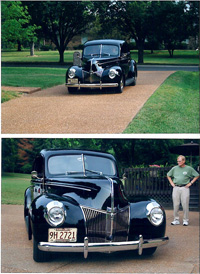 The parts for a given vintage restoration project may come from different parts of the country; there may be a combination of original and newly produced equipment, which may require a lot of legwork and Internet research to obtain. As a restoration engine specialist, you will have to be prepared to put in extra time that is often required to find, make or repair the correct parts. Your customer is counting on your expertise to get it right.

Some engine parts are becoming more difficult to find, but for many older applications, parts are readily avaliable. Mandlin says new old stock (NOS) is drying up on some applications. He says that Egge will source as many parts as possible in cases where parts are hard to find, but it can make pistons, valves and get gaskets made for a variety of applications along with rebabbitting connecting rods and main bearings.

“Some of our customers call for parts to restore/repair very rare or limited edition foreign automobiles,” says Mandlin. “Depending on the request, Egge may not have the resources to fill the customer’s needs. Egge specializes in domestic vehicles manufactured from the early 1900s to 1980 – our coverage on foreign vehicles is not as extensive. In the past, though, Egge has helped people with components for Rolls-Royce, Talbot Lago, Mercedes, Jaguar, and Hispano Suiza. It really depends on the application and what we can do with the customers’ requests.” 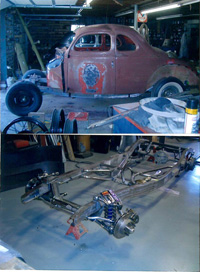 Experts say NOS parts are still around and in relatively good supply for many  older domestic applications. However, restoration specialists will likely have to rely on a combination of new parts that are custom made for your applications along with the NOS supply.

If you are lucky you may get to build two engines for one classic car. This is often the case when restoration enthusiasts who own these classics want to drive them and not worry about ruining a numbers matching engine. Musclecar owners in particular are also following this model more and more. Vehicle owners that have the numbers matching components want to restore them and keep them intact as much as possible. But these customers also want to have fun driving the car around and showing off to their neighbors. Who wouldn’t? 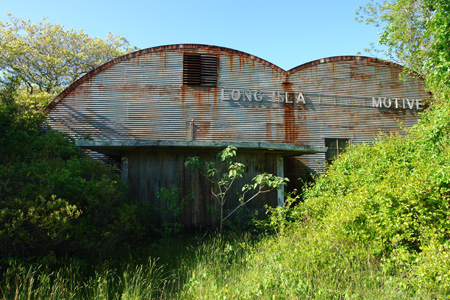 Egge’s Mandlin believes there will always be an interest in restored automobiles, “Older vehicles are just more appealing and distinct than newer vehicles. Everyone has a story about his/her first car or a car that their friend had or the car they took their first vacation in. All great reasons to restore a classic car and recapture the good times and simple pleasures.” 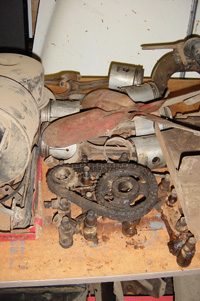 Back when I was in high school in the early ’60s, a friend of mine had a black ’40 Ford coupe with an Olds in it. We lived “American Grafitti” in that car – including some races on “Paradise Road.” He parked it in ’62 and sold it to a guy who was going to restore it in ’79. Twenty six years later, I found it in a shed in my home town – a half a mile from my Dad’s farm!

I talked the guy out of it, bought it in December of 2005 and spent the next three years making it look like it did back in ’62. We painted it black and did the interior in the original mohair.

We updated the original instruments so they would work with modem senders and put a Sun tach up on the steering column with a hose clamp. The dash and all the interior trim pieces are the correct color and the fasteners are nickel-plated, slotted screws, just like the originals. So, it looks stock inside and out, right down to the steel wheels, button caps and beauty rings.

Meanwhile, it has an all new chassis with modem running gear under it. The chassis has: Heidt “Mustang II” front suspension, power disc brakes with an 8? booster, power rack and pinion steering, and a front sway bar.

• Narrowed nine inch Ford rear end with parallel leaf springs. The engine is a 406 cid Chevy small block that was built to be a “torque monster.” It has Mahle forged pistons with 9.5:1 C/R Eagle 6” rods.

The transmission is a 700R4 that was built to match the torque curve of the engine. Phoenix Transmission Products in Texas built it so it’s smooth at low rpm, part throttle shifts, but it hammers them under full throttle. It works good with the 2,000 stall converter, too.

So, there it is; one man’s trip down memory lane and one more chance to do it all over again. It just goes to show you’re never too old to have a good childhood.  – Doug Anderson

GOT ZINC? Your customer’s classic car or hot rod engine wishes you did 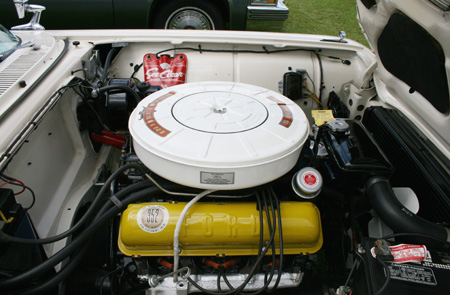 Follow the instructions from the camshaft manufacturer on how to perform the mechanical installation of the new camshaft, lifters, and valve train.

A cam/lifter assembly lube that contains moly must be used to coat all highly loaded surfaces (cam lobes, lifter faces, distributor gear, fuel pump lobe, push rod ends). Use enough moly paste to adequately coat the surfaces. Do not use excessive quantities as the function of the moly is to provide interim friction reduction to the surfaces until the ZDDP anti-wear chemistry in the engine oil can reach the surfaces and activate. Once this happens, the moly must vacate these surfaces to allow the ZDDP to control the microscopic wear mechanism associated with proper break-in.

Proper ZDDP level in the break-in oil is critical for controlling the break-in wear. Zinc concentration of 2,500 ppm will provide proper protection for the cam, lifters, and valve train during break-in. For full temperature range protection from cold start to hot operation, be sure to use a ZDDP product with both primary and secondary ZDDP.  – Timothy Miranda, President of Cam-Shield Lubricants

For a list of zinc additives, visit our online Buyers Guide.