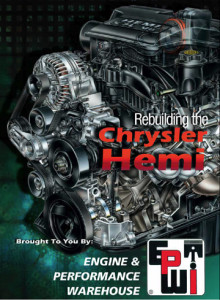 Chrysler made the Hemi engine famous. They didn’t invent the hemispherical chamber, but they were the first to build an engine with a hemi chamber for an American car back in 1951. They originally called it the “Double Rocker Shaft V8,” but it soon became “the Hemi.” It made a lot more power than the rest of the car engines that were available at that time, so some people say Chrysler started the “horsepower wars” with the Hemi. What made it so good?
• It had better volumetric efficiency because it had good ports and bigger valves that opened away from the walls.
• It had a low “surface-to-volume ratio” which gave it better thermal efficiency so it made more power.
So, with the best chamber, plenty of cubes, generous ports and better airflow, it was a winner – except that it was heavy (a 392 cid Chrysler weighed 737 pounds), more complicated and more expensive to build – so it eventually lost out to the big wedge motors like the 383, 400 and the 440 cid.
Chrysler has built three different families of Hemi motors since 1951. There were 12 different engines in the first generation that ranged from a 241 cid Dodge to the 392 cid Chrysler and spanned almost ten years from 1951 through 1958.
The only engine in the second generation was the legendary 426 that was built from 1964 thru 1971. It was originally intended to be used for racing at  NHRA and NASCAR tracks, but it ended up on the street because NASCAR told Chrysler that they had to sell at least 500 cars with the “street hemi” to make it legal for the Daytona 500 that year. It died in ’71 because NASCAR had outlawed it on the trackand the emissions police frowned on it for the street.
So, it shouldn’t come as a surprise that back in the late ’90s, when Chrysler realized that they would need a new engine with more power and torque for their trucks, they decided to build the third generation Hemi for the 2003 Ram pickups. Since then, it’s been used in their SUVs, Jeeps and RWD cars, too. There are purists who say it’s not a real Hemi because it has squish areas on both sides of the chamber, but it’s close enough for the rest of us. It has a hemi-shaped chamber with the valves canted toward the middle of the cylinder, four rocker shafts with good valvetrain geometry and generous ports. And, it incorporates some modern technology including aluminum heads, dual spark plugs, roller lifters and a “multi-displacement system” (MDS) that deactivates four cylinders under light loads. So, you can have 345 hp and still get 21 mpg on the road – at least that’s what I got on my 4WD Hemi pickup on a 100-mile trip with the cruise set at 68 mph.
So, let’s take a look at this new Hemi including both the 5.7L and the 6.1L.
Click here to download a viewable pdf (Chrysler_Hemi.pdf).