When he first started Survival Motorsports, Barry Rabotnick hoped to
sell parts, primarily for Ford FE motors.  “My goal was to become the
single-point supplier for the FE Ford enthusiast.” 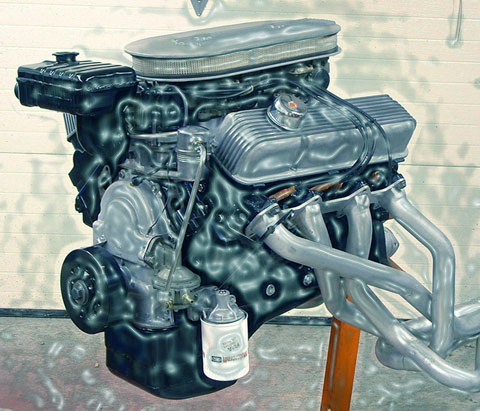 The
FE, says Rabotnick, offers significant advantages to the right user.
“The builds I’m doing on the FE might not be the same as people are
doing with another engine family, because we’ve got a real tall deck
and it lets me put pretty much as much stroke into it as the block can
carry. And because of the way these motors are used, it becomes a
bigger is better combination that works best.

For a 390-based
build, where the horsepower is limited by the architecture of the
block, you’re not so interested in horsepower as in torque. For the
427-based motors, the vast majority are built for Cobra kits, fairly
high-end Mustangs or lightweight drag cars, including Fairlanes and
other classics – and these guys are after big horsepower.

Rabotnick
explains on his Web site that relatively minor changes can produce
significant improvements. “A .030?- over 390 with a 4.250? crank is
about 445 cubic inches. With dish top pistons and 72cc Edelbrock heads
you get 9.8:1 compression.  Flat-top pistons will net you 10.8:1
compression.  We make 500+HP with this.

“The only
time I see a request for a shorter stroke are from guys in a road race
environment,” Rabotnick says. “It’s primarily Cobra guys who figure
they need a shorter stroke due to their higher RPMS. Because they run
at high rpm for an extended period of time, they’ll go to a shorter
stroke to keep the piston speed down. But frankly, those guys are in
the minority of my customers.”

Rabotnick says most of his
customers want bigger, and the 4.250? stroke assembles like a stock
engine. “There’s darn near no grinding needed because these FE blocks
have so much clearance already. They’re so much easier than building a
383 Chevy or 347 Ford.”

Who’s buying his motors? In a lot of
cases, it’s guys trying to recapture their youth. Resto mod customers
are buying these motors and putting a lot of them into old Ford
F-Series pickups or Galaxies.

“In the past, the pickup guys
have been pretty low budget, but they’ve decided they want more power.
I never realized how big the truck market is – now, 30% of the market I
see is in modified trucks from the ’60s and ’70s. If you were in the
South, Southwest or farm states, instead of growing up with a Mustang
or a Torino, you grew up with an F100. The dream when you get older and
have a little extra money isn’t for the ’68 Mustang Fastback, it’s to
have the coolest ’71 F150 in the neighborhood. And they’re restoring
these trucks, the same way cars are done.”

Rabotnick says in
today’s world, the end customers are still relying on the “do it for
me” supplier. “Customers are a little older, they want people to do
their dream cars (or trucks) the right way. The economy has a lot of
people nervous, but we’re staying busy.”

FE stroker stuff still
costs money, of course, but it’s not like it used to. Rabotnick says
it’s important for people to realize that big block Ford stuff is
available. It’s probably as cheap or cheaper to build a high horsepower
545 or even a 557. An 800 hp 557 Ford is probably comparable to or less
expensive than building a big Chevy.

“Five or six years ago, you
only heard about 383 Chevys. 302 Fords were just starting to get the
347 thing going. When everyone thought of strokers, they thought of big
and small block Chevy and small block Fords. It’s good to remember that
big block Ford stuff is available as well,” he says.

“Stroker stuff is cool – it’s good to see it happening in engines for which it hasn’t been popular.”

Rabotnick
is quick to thank his supporters, who were there when he got started.
“When I started out, I had been building the FEs for my own use. Tom
Lieb from Scat, Bob Fox from Diamond Pistons and the guys at Probe
Pistons were the first ones to sign on with what I was doing.”

Although
what he planned on doing and what he ended up doing aren’t necessarily
the same thing. “I started off just selling parts, then people started
asking me to build them an engine. Now, parts sales accounts for about
55 percent of my business. I guess I became an engine builder without
really realizing it!”