The following Complaint/Cause and Repair scenarios will assist in troubleshooting for HVA element noise:

Tapping / rattling noises from the area of the valve train up to 20 seconds after a cold start.

Influencing factors for this complaint:

This condition is not caused by mechanical damage to any engine components and has no damaging effect on the service life ofthe engine.

Check that oil viscosity is matched to ambient temperature range at which the vehicle is being operated. Refer to Temperature/Viscosity chart for further information.

Hot engine oil initially escapes from the oil galley of the HVA elements when the engine is stopped. A small amount of oil also escapes through the gaps between the HVA elements and the HVA housings in the cylinder head.

The oil then contracts while the engine is cooling down and allows air to enter the oil system. During the subsequent cold start, this air can be forced into the HVA elements (causing air pockets) through the build up of engine oil pressure. The resulting clearance between the HVA elements and the camshaft lobes causes the tapping/rattling noises.

This HVA tapping/rattling noise is not dependent on the amount oftime the engine is off, but rather on:

• The number of subsequent cold starts without the engine being warmed up to operating temperature.

Run the engine to dissipate (bleed) the air trapped in the high pressure chamber of the HVA elements.

Refer to the HVA bleeding procedure described below.

Tapping/rattling noises in the area of the valve train after extreme cornering/lateral acceleration (engine oil level at or below minimum).

Note: These valve train noises will not stop until the engine is run for approximately 10 – 15 minutes at an engine speed of at least 2,500 rpm with the oil at the proper level.

During extreme corneringllateral acceleration with the engine oil level at or below minimum, air can be drawn in by the oil pump (oil foaming). The air which is drawn into the oil system can enter the HVA elements. The resulting clearance between the HVA elements and the camshaft lobes causes the tapping/rattling noises.

Run the engine to dissipate (bleed) the air trapped in the high pressure chamber ofthe HVA elements. Refer to the HVA bleeding procedure described below.

• If a tapping/rattling noise can be heard from the valve train, run the engine for 3 minutes without load at approximately 2,500 to 3,000 rpm (bleeding procedure).

• Then with the engine at idle listen for valve train noises again.

Note: Only listen for noises when the engine has reached minimum oil pressure, i.e. after a waiting period (at idle) of approximately 15 – 30 seconds.

• If no more noises can be heard, the test procedure is complete. No further action is necessary, the engine is working properly.

• If the tapping/rattling noises can still be heard, the bleeding procedure must be repeated (run the engine for 3 minutes at 2,500 – 3,000 rpm).If necessary, repeat this procedure up to five times.

• If the tapping/rattling noises can still be heard, the bleeding procedure must be performed one final time for approximately 15 minutes.

• If no more noises can be heard, the test procedure is complete. No further action is necessary, the engine is working properly.

If the tapping/ rattling noise is still heard after performing the above HVA Bleeding Procedure the following scenarios will assist in further troubleshooting for HVA element noise:

If the noise is coming from all HVA elements an oil supply problem is the most likely cause.

If the oil pump pressure (at idle = minimum pressure or regulated =maximum pressure) is below specification a visual inspection of the oil pump and oil pump pick up in the oil pan should be performed with emphasis on the pick up gasket and control valve O-ring were applicable.

Note: A faulty oil pump control valve O-ring or oil pump pick up gasket (slight tear in O-ring or gasket) may not always result in a low oil pressure indication when performing an oil pressure check. The air drawn in to the lubrication system via a defective gasket or O-ring will cause oil foaming and HVA tapping/rattling noises.

If the noise is still coming from an individual HVA element after performing the above HVA Bleeding Procedure the suspected element(s) can be isolated as follows:

• Turn the engine over (normal direction of rotation) until the camshaft lobe ofthe HVA element to be checked is pointing away from the HVA element (engine valve completely closed).

If the HVA element collapses slightly as though it is spring loaded, this is a sign that air is trapped in the high pressure chamber.

If any clearance is detected this indicates that the HVA element is sticking.

• Conduct the checks as described above on all HVA elements.

Remove HVA elements and visually inspect. Replace any suspect "soft" HVA element(s) and check others for extreme wear (deep grooves, scratches, etc.) which may also need to be replaced.

Note: Always reinstall used HVA elements in the same bore which they were removed from. This prevents possible binding due to different wear patterns between the bore in the HVA housing and HVA element.

An HVA element which is binding (element stuck in the extended position) will not allow avalve (intake or exhaust) to seat properly causing valve seat leakage.

This type of HVA failure may not cause a tapping/rattling noise but the customer complaint may be, "engine runs rough during the warm up phase and runs good when warmed up" and/or the "Check Engine" lamp is on.

If the "Check Engine" lamp is illuminated due to a binding HVA element(s) one or more misfire fault codes may be set in the Engine Control Module (ECM/DME).

Note: Basic troubleshooting should be performed First before checking for a binding HVA element to eliminate all other possible factors/components which could set the misfire faults such as low fuel level, a faulty spark plug, etc.

• If there is a binding HVA element in one or more cylinders as described above a misfire fault can typically be reproduced in the affected cylinderfs) by duplicating the conditions in which the misfire occurred according to the DME/ECM fault code description i.e., at engine temperature = X, engine speed = X, etc.

• A binding HVA element which is causing a misfire in one specific cylinder will not "move" to an other cylinder and will always cause a misfire fault in the affected cylinder.

• Performing the "Smooth-Running" test (found in the DME control unit functions section of DIS) will assist in pin pointing a cylinder with a binding HVA element.

A cylinder with a binding HVA element will indicate a high reading when compared to the other good cylinders.

• Since a binding HVA element may in some cases be intermittent (engine only runs rough when cold) if a cylinder leak down check is used for troubleshooting this should be performed when the problem exists, for example: compare the cylinder leakage rates to each other with a cold engine to determine the cylinder with the extreme leakage rate.

A cylinder with a binding HVA element will indicate a leakage rate above 15%.

• A binding HVA element will typically have a high pressure piston (located in the center of the HVA element body) which extends out approximately 3 mm further when compared to the other HVA elements removed from the cylinder head.

Replace any binding HVA element(s) and check others for extreme wear (deep grooves, scratches, etc.) which may also need to be replaced.

Note: Always reinstall used HVA elements in the same bore which they were removed from. This prevents possible binding due to different wear patterns between the bore in the HVA housing and HVA element.

Some or all of this information was provided by the Automotive
Parts Remanufacturers Association (APRA). For more information on
technical bulletins available through APRA call 703-968-2772 or visit www.AutoBulletins.com. 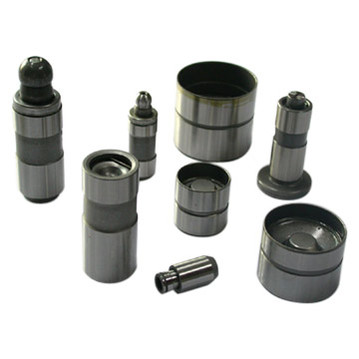