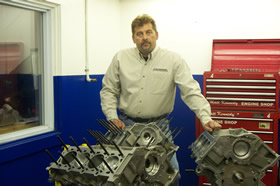 James D’Amore Jr. was brought up in the automotive industry. He started sweeping floors in his father’s auto repair business back in 1973 at the age of 12. He would pedal his bike to the shop nine miles after school every day. On the weekends he and his father went to Englishtown Raceway Park, NJ’s Premier Drag Strip.

In 1990 D’Amore was invited to Ford by an engineer named Tom Johnson who had read about one of his project motors. After two weeks stay in Michigan he got his first look at the 4.6L modular motor. What most intrigued him about the engine was the cylinder head. At the time there was only the two valve version. Over the next couple of years D’Amore met a lot of Ford engineers and even got involved with its desert racing program.

On one of D’Amore’s trips back to Michigan he was asked to do some "abuse testing,” as they called it on the new 4.6L four valve motor. So in early 1994 Ford gave him six engines and two cars. The cars were 1993 Mustang coupes outfitted by Roush to fit the 4.6L four valve. D’Amore was so impressed by how much real-estate the four valve motors filled up in the engine bay that he started a sub-contracting business for Ford.

In early 1995 Ford liked it so much that it started its own supercharged four valve, which was called the King Cobra. The car was black with gold stripes. So for the past ten years D’Amore says he has found most of the power came from the cylinder heads. D’Amore’s company JDM Engineering builds over one hundred 4.6L and 5.4L motors per year and over 160 sets of cylinder heads per year for the two valve, four valve and the three valve engines.

So as you can see D’Amore has a lot of passion for the Ford modular engine. For the past nineteen years he have driven one every day, has worked on one everyday and designed parts and engine combinations espatically for the performance industry.

For the past ten years, JDM Engineering has won the more championships, more race wins and more round wins than any other company in the world with its own design modular motors.