After months of anticipation, Ford Racing has announced that the FR9 engine will make its debut under the hood of Matt Kenseth’s No. 17 DeWalt Ford Fusion and David Ragan’s No. 6 UPS Ford Fusion in this weekend’s Amp Energy 500 at Talladega Superspeedway.

“I’m very excited about the debut of the FR9,” said Brian Wolfe, director, Ford North America Motorsports. “All of us are anxious to see it in competition for the first time.

“Those of us who have been involved in this project agree that one of the biggest hurdles we’ve faced in making this transition to the FR9 this year has been the fact the current Ford engine is still so competitive, along with the economics of obsoleting the inventory of the current engine and parts. This has been a tough year for us and our teams on the track, especially since we had such a strong 2008, and the priority for everyone this year has been solving the on-track performance, which has slowed down the rollout of the FR9.”

Code-named FR9, this new piece is the first purpose-built NASCAR racing engine to ever come out of Ford Motor Company. Its design has been spearheaded and developed by famed engine builder Doug Yates and Ford Racing engineer David Simon.

“This puts us on a level playing field with the rest of the competition and it’s something we’re excited about working on,” said Yates, who has been involved with the project since it began three years ago. “Right out of the box the engine is really impressive power-wise.

“We feel like it’s going to give us some advantages aerodynamically where, perhaps, we can tape the cars up more and run the engines hotter. The oiling system is designed for a racing engine and, to this day, the current engine has done a great job for many years, but we’ve got to remember when I started 20 years ago the block was already in existence. So a lot of things have changed,” continued Yates. “The demands have changed. The RPM and the power levels have changed tremendously, and to have an opportunity to have something new and move forward makes this an exciting time to be part of Ford.”

While having a blank sheet of paper to build a new engine from scratch was something the team embraced, it also meant those initial decisions had to be right.

“The biggest challenge was probably deciding on the framework of the engine – making the big decisions on port arrangement and valvetrain layout,” said Simon. “In some cases we went and got data that we needed to make decisions, but that’s the most nerve-racking part. Once you set the course for the project and what the engine is going to look like, then you have to go with it. If you get that wrong, you’re going to be behind the 8-ball for the rest of the program.”

Some of those crucial decisions included an all-new platform for FR9 with no carry over components or dimensions from the current production-based 351 engine. Elements such as the induction exhaust, valvetrain, cooling, lubrication and sealing systems have all been improved for greater efficiency and performance.

“The potential of this engine going forward is far above the current engine, which is towards the end of its development curve,” said Simon. “Another improvement with FR9 is it has been designed to improve manufacturability and serviceability, offering the engine builders savings in labor and cost.”

While the restricted version of the engine will debut next week, it has yet to be determined when FR9 will hit the track at an unrestricted venue. One thing, however, is for certain—the FR9 is here to stay.

“It’s a reflection of the great effort by the Ford engineers, by Doug Yates and his people, by my guys, and a vendor or two that we consulted with. Together they have brought cutting-edge technologies and cutting-edge thinking for casting layouts and torque loading, and for the way the stress and the fatigue will be carried throughout the structure,” said Jack Roush. “We expect the castings to be more durable. We expect the valve seat life and the piston life to be improved and we expect a better result from the drivetrain. We look for decades of usefulness with the FR9. I feel sure it will contribute greatly to our teams and to Ford’s future success in the sport.” 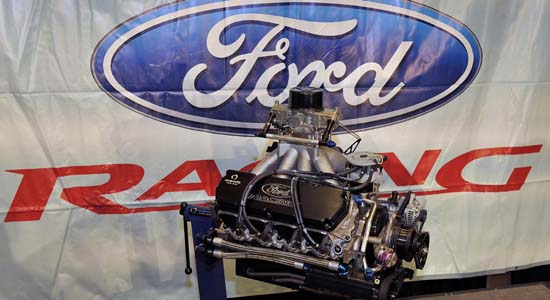 Each year AETCbrings together engine builders, racers, engineers and media members from around the world to exchange information on the day’s most popular engine-building topics. In an effort to make information about the conference even more accessible, AETChas recently launched an updated, easy-to-navigate website. Related Articles – MERA to Hold Remanufacturing and Sustainability Conference on