Because many engine builders have scratched their heads trying to figure out how to build powerful AND durable Modular engines, Ford fans were waiting in anticipation like kids in a candy store for the 20th annual Conference, ever since the topic was announced at last year’s AETC.

AETC prides itself on its access to speakers and industry leaders, whom you can meet during breaks in the action to discuss issues in the racing industry with them and fellow attendees. Everyone is the same at this conference, whether you run a company or work in the cleaning department.

Held just before the Performance Racing Industry (PRI) Trade Show on December 7-9, 2009, at Orlando’s Orange County Convention Center, AETC has steadily gained in attendance since it moved to Florida in 2006. Following the same recipe as last year’s LSx theme, AETC had a powerful lineup of Ford Modular experts to speak on the topic.

One of the interesting notes about the Mod engine is that it did not get its name from its design or sharing of certain parts among the rest of the engine family. The name was derived from its “Modular” manufacturing plant protocol. The plant and its tooling can be changed out in a matter of hours to manufacture different versions of the engine family.

Al Noe of Trick Flow Specialties spoke about “Designing the Ultimate High Performance Modular 2V Cylinder Head.” Noe said there were many things to take into consideration when designing its Twisted Wedge cylinder heads for modular engines. The goal was to design a performance cylinder head for the Ford 4.6L SOHC and 5.4L SOHC modular engine family that included all factory emissions equipment and accessories that added 40-50 hp more than factory cylinder heads, and 20-25 more hp than CNC-ported aftermarket heads.

Sean Andrew of Diamond Racing Pistons spoke on “Understanding Advanced Piston Technology and Optimizing for Ford Modular Motors.” Andrew said that the desire to reduce mass and lighten the piston has grown stronger and Ford Mod builders are no different. There is a fine line between trading piston stability for weight reduction. An unstable piston can wreak havoc on horsepower, just as much as having a heavy slug for a piston.

Jeff Lyjak and Rob Deneweth of Ford Racing presented “An Insider’s Look at Ford’s Modular, from Inception Through Racing 2010 Cobra Jets.” Lyjak said that Ford had decided to build a whole new engine family (Mod) primarily with the goal of high efficiency. Lyjak and Deneweth assembled a group of volunteers within Ford for a “Skunkworks” project, a 4.6L 4V “niche” engine that was hand-assembled by the SVT team.

This is only a brief overview of the detailed information presented at AETC, and you can find much more information online at www.aetconline.com. However, unless you’re in Florida for next year’s Conference you won’t know how much you’ve actually missed. 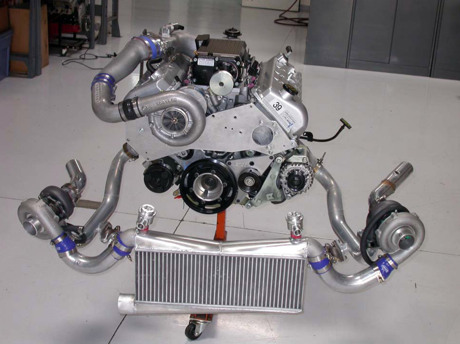