Due to these hard times, fewer customers are looking for your services, and they’re looking to spend as little money as possible. A small shop can survive on low-margin jobs for only so long before the overhead simply eats you alive. One alternative plan is to add a line of vintage performance engines that command higher margins and a special knowledge base and skill set.

Unless you are already a full-on race engine shop it’s unlikely that you’ll be screwing together 900 cid Pro Mod motors, or even a competitive NHRA Comp Eliminator motor anytime soon. However, there are many niches in performance that are easy to break into and more importantly, easy to market to. One of those is vintage speed. Retro hot rodding is big – rat rods, clone drag cars and hopped-up muscle cars are currently stealing the show. Car builders are spending whatever it takes to create the car of their dreams and the engine is a big part of the build.

It’s hard to believe that the end of the golden musclecar era was 1970 – some 40 years ago. I don’t know if 40-year-old engines qualify as vintage engines in everyone’s mind, but they do in mine. And those of us who lived through (and for) that era have fond memories of 426 Street Hemis, L88 big-block Chevys, 427 High-Riser Fords and all of the rest that made these cars interesting then and, if you watch much of the Barrett Jackson auctions, highly valued now. The golden era may really be now because you can still build versions of these engines with more modern parts that are more reliable and make power unheard of in the late ’60s and early ’70s.

For those identifying with the decades preceding the musclecar, there’s plenty to get excited about too. You can practically build a Ford Flathead V8 from scratch.  There’s no limit to what you can do to them, either with supercharger kits and even the exotic Ardun OHV conversions ready to pump out 300 hp-plus.

Hot Heads Research & Racing, Lowgap, NC, is offering new aluminum early Chrysler Hemi heads that are not only much lighter than the originals, but vastly improved in port design. Earlier four-bangers are a little more sketchy with plenty of readily available replacement parts such as those available from Egge Machine, Packard Industries or similar manufacturers. The speed equipment is not quite as readily available. Someone might find an old OHV conversion that will need some serious restoration before it’s a serviceable part again. Swap meets, eBay and Hemmings are likely sources for rare, used vintage speed equipment.

A lot of activity has been focused on the early ’60s muscle engines with companies like World Products, Ronkonkoma, NY, introducing a new aluminum 409 Chevy block that has the capability of displacing 632 cid. Stick one of those in your ’63 Impala and no one would ever suspect it, right? Edelbrock is selling 409 aluminum heads and a couple of different manifolds, too. Bill Coon,?Romulus, MI, is finishing up a new run of SOHC heads for the 427 Ford (now that’s a big project). And the Mopar guys can get just about anything they need for big Mopar Wedge and Hemi motors from companies like Indy Cylinder heads.

So how do you fit in to the vintage speed picture? Most successful engine builders have chosen a single marque, and a market they want to develop. H&H Flatheads, La Cresenta, CA,  caters to street rodders and vintage racers. They offer complete turnkey engines and individual components such as a wide variety of high compression heads and performance intake manifolds. H&H also offers new cylinder blocks for Ardun engines and new reproduction Ardun OHV heads.

Many others such as Barry Robotnick of Survival Motorsports, Pontiac, MI, saw a need for potent Ford FE engines and has built a strong following of customers with kit Cobras and extremely fast FE powered musclecars. Engines that were not that popular when new like the 390-401 AMC are so popular now that at least three companies are building aluminum aftermarket heads, including Herman Lewis who has built a reputation on high performance 401 AMC race engines in Beckley, WV.  An aluminum block is also on its way for AMC fans.

It really helps if a new block is available as finding useable cores is one of the biggest problems with vintage engines. Huge power is not a prerequisite for building your own niche as Ted Eaton Specialty & Balancing in Lorena, TX, has found out bolting together Y-Block Fords. The demand for Y-Blocks in early F100 pickups, ’55-’57 T-Birds and now rat rods is pretty incredible.

Specializing in a particular engine or family of engines has its advantages, especially for a small shop with limited resources. First and foremost is that most of these vintage engines have their own individual quirks. Take the 401 AMC for example – the oiling system requires some external oil lines to reroute the oil for maximum reliability. Unless you specialize you wouldn’t necessarily know what these issues are and develop fixes for them. The same goes for camshaft selection and compression ratio. These early engines are not as homogenized in design as today’s engines are.

Secondly, you can cut and manage your parts inventory more effectively. If, say, you build five of these engines per month, you know what you need to have on hand to keep the build moving through the shop. Some of the parts you need may take weeks or months to get. Specialized tooling can be limited too, such as torque plates, drill jigs and even simple hand tools like ring compressors. Of no lesser importance, specialization allows you to narrow your marketing focus to a very specific group. That can be a huge savings in marketing dollars, keeping you profitable.

How do you go about marketing your services to a select group that would be interested in the type of engines you specialize in? First, build a Web site. It doesn’t have to be elaborate or expensive, just informative. If you don’t already have a site, use a service like Intuit where you can select a template for a homepage and develop your site simply by filling out forms. The reason you need a site is that you can run smaller, less expensive ads driving potential customers to your site where you show and explain what you do, how much it costs, and whatever else is needed.

Next, you need to reach out to the consumer in a cost-effective way. Here are a couple of suggestions: first, buy Google keywords for your specialty. I can’t imagine that there is much competition for 409 engines, or AMC performance, so these keywords/phrases should be very affordable. Just having a good selection of keywords will drive potential customers to your site and your business. Small print ads like those one-inch ads in magazines such as Hemmings Motor News are great because they are placed within a special section, such as the AMC section. This is referred to as a rifle shot in marketing as opposed to the shotgun approach. Club newsletters are cheap and effective too.

Don’t overlook the online forums (such as Engine Builder’s Combustion Chamber Forum) that discuss the engines you are focusing on. It is a great way for a group of people to depend on your advice and elevate you to expert status in the member’s minds.

One last bit of advice – everyone has a favorite vintage car or engine – go with what you like and know, at least for starters. Your passion and intensity is much stronger if you are doing something you love. It will help you get through the roadblocks and setbacks associated with any new venture. 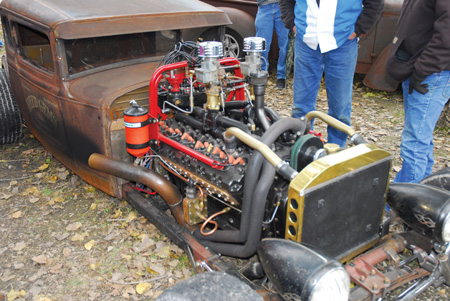