Let’s face it: there are only so many 340 Chryslers, Boss 302s, 427 medium risers and 440 Six-pack engines out there. Luckily, many combinations of less-familiar engine components are readily available and can rescue you from the cookie cutter mentality.

A quick inspection of a few of the many forged piston manufacturers’ catalogs reveals a good selection of stroker pistons for some of the less popular engines found in many popular cars. Add some simple mathematics, a piston size chart and some machine work to expand on the available combinations and you’ll find you can formulate engine combinations built from the motor found under the hood. With the money your customer can save by not buying an expensive core, he can buy some better performance parts like forged pistons and a stroker crank.

The old hot rodder’s axiom, “there is no replacement for displacement,” still applies. So if you could build a 390 to 396 cubic inch motor from the 318 in your customer’s car, will it be any less of a performer than the 340 that you’ll have to throw down big dollars for a reasonable core? Add a new set of Magnum factory – or, better yet, aftermarket – heads and you can plan on building a motor that will set your customer back in his seat, without setting him back in his retirement fund.

Got a customer building a kit car? Why not build a 427 cubic inch motor from a 360 or 390 Ford truck motor? Add a set of aluminum aftermarket heads and manifold and you have a big block that weighs in like a small block Chevy. An FE is a very recognizable engine and it belongs in a Cobra or Shelby, whether real or clone.

I have a friend and customer who has specialized in the 400 Ford for many years. He has convinced me that it makes more sense to upgrade an old 351M or 400 than to search out a 429 or 460 and all the trimmings to upgrade an old Ford truck. Plus, with more than 430 inches under those Cleveland four-barrel heads you had lying in the corner, you’ll finally have a motor with enough cubic inches to use those monster ports.

Out here in flyover country, we have some very creative customers. How about a 390 cubic inch Chrysler “Poly” head? One of my guys built one for his early ’60s Coronet and bolted on a two-four manifold from a late ’50s 326. Now he no longer has to fear the embarrassment of someone showing up with the same outfit! Big horsepower? No. But this combination has torque that will fry the tires. The only problem is, I hear he’s getting tired of answering, “What IS that!?”

Or start with a 400 and build a 428 or 455/461. I’ve seen kits on the Internet for 383 inches from a 350 Poncho. Why replace that 455 Olds with a 492 Chevy, when you can have 495 inches of “not your father’s Oldsmobile?” We all know a 289 can make 347 or more inches, so let’s add a set of Cleveland 2-barrel heads for a Boss clone. These combinations and more are only limited to your imagination if you or your customer have the pocketbook for a set of custom pistons.

An interesting creative exercise, perhaps, but what’s the relevance of all this? Our future. If every customer just wants to build a small or big block Chevy, not only will it get boring, but, the competition for these “cookie cutters” will drive the profit right out of building them. This opens the door to what’s easiest: the “crate motor,” and there’s little or no profit there for you and me.

And what about the future of cars to put these big inch motors in? Many of the engines built today are for that segment of restoration we call Muscle Cars or Resto-rods. The question must be asked: What will we build when all the Camaros, Chevelles and Road Runners are all gone? What happens when these cars all get too valuable and too expensive for the regular guy to buy and build? Obviously, there are only a finite number of these old classics still surviving and this market has to dry up someday. After thinking about this for a minute I recently realized that the next generation of restorer/builders hasn’t grown up with the same models we covet today. Their memories are full of ’80s and ’90s era cars: “tomorrow’s classics.”

Though they’re usually but not always limited to a 2-door mid-size model, to my mind, the common denominator for a successful V8 street rod is rear wheel drive. With a V8 motor in the front, a drive axle out back and a good selection of aftermarket parts, we have the makings of someone’s project. Now, this is not to discount all the fine front-wheel drive cars and the spreading Sport Compact market, but the majority of the shops I call on know very little about this market. It seems to bypass them. It seems to be more Internet driven, more “tuner-installer” oriented and less machine shop customer-focused.

But I simply do not accept the idea that the classic Muscle Car era models – nor the less popular models – are all gone. For every hot GTO GM put out, there must be several less desirable LeMans. Chevy Novas are now in great demand, but how about building a Ventura II with a Pontiac V8, or an Olds Omega with a 455 or, better yet, that 495 stroker. The market is still ripe. Americans are still in love with their cars and will find the money somewhere to build the right

A quick look in a major gasket manufacturer’s parts book allowed me to research a large selection of V8 cars from the late ’70s and on up into the turn of the last century. Unfortunately for the Mopar fans, the selection is a little thin. Chrysler seemed to turn its back on rear wheel drive in the ’80s and ’90s. But there are a few overlooked models that will still lend themselves well, such as the Dodge Aspen, Plymouth Volare and Fury II, not to mention the Dodge trucks. And, there seems to be a realization among Mopar fans that during the mass frenzy to own a GTX, Hemi ‘Cuda or Charger, a whole camp of Darts, Dusters and Valiants were overlooked and are still available at reasonable prices.

Finding a GM or Ford is much easier. Second and third generation Camaros and Firebirds are plentiful. Many came with V6 power, but still have plenty of room under the hood for a big V8. Don’t forget the Monte Carlo, Cutlass, Regal and the various mid-size models, and the GM mid-size station wagons can look pretty cool with a little work, and many of them came V8 powered.

Ford made millions of HO and 5.0L Mustangs in the Fox-body style. The Fairmont was available with a V8, T-Birds are cool and ‘80s short bed pickups are simple and seem to be begging for a big block mill.

Now these models have been around for sometime, and we are seeing some being built today. And all of these models are now over 25 years old. The smog laws in most states exempt them. Though fuel injection makes them easy to start and can give fair mileage, most enthusiasts will toss it in favor of a good carburetor.

Not everyone is building a numbers-matching “resto-rod.” There are plenty of opportunities in the “rat rod” and street rod markets as well. What could be worse than a “belly button” crate motor in your primed and slammed Model A? And with the availability of adaptors to use modern transmissions with a 1950s or ’60s V8, our potential clientele list continues to grow.

Next time a customer comes to you looking to build a hot rod or performance engine you have a choice: Let them be like everybody else or dare them to be different. With a little creativity, help them “Love the one they’re with!” 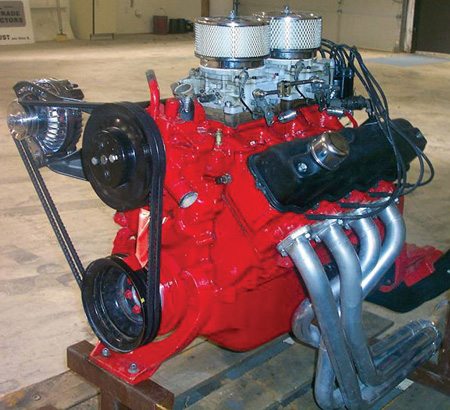 Stroker Motor Opportunities: Love the One You're With