Not every shop is closing and, in fact, there are even new, state-of-the-art shops opening, as evidenced by GJM’s grand opening last month. Earlier this year, Gregg Jacobson and Mark Garrett launched a new machine shop in Southern California about 40 minutes outside of L.A., in the San Fernando Valley.

Both Jacobson and Garrett saw an opportunity they couldn’t pass up and the plan was set in motion to open an 11,000 sq.ft. facility that featured all of the latest tooling and equipment at their disposal including CNC machine center and a dyno capable of handling 3,000 hp.

To survive today, shops need to offer something unique to customers that has wide appeal. “We got involved with Roush-Yates Racing to distribute their used NASCAR Nationwide engines and related parts. We carry a large inventory of these engines,” explains Jacobson. “And we can tailor the engine to whatever the customer wants for their application.”

One of the aspects of GJM’s NASCAR engine program is that they are adaptable to many applications and performance markets. Other markets that GJM thinks these retired Ford racing engines might feed into are drag racing, sprint cars (on a limited basis), dirt modifieds, hot rod, street performance as well as performance marine.

It is to GJM’s credit that it is involved in all of these niche markets, and the marine market looks especially tasty. “We are drag boat racers so we got involved with the marine market because we were there and knew it,” says Gregg Jacobson. We have been fielding a boat in International Hot Boat Association (IHBA) competition (an organization now called the Lucas Pro Series) for about four years now. One of the things that really caught our eye was the Unlimited Hydroplane Racing Association (ULHRA). We think this engine would be a great fit for one of these boats."

Jacobson says there’s already a team running a Toyota NASCAR engine – basically a crate engine – and doing very well. Jacobson says that Toyota Racing Development gave a hydroplane team an engine to test with but the team has not altered the driveline or the engine for better performance in the boat. “We, on the other hand, have the ability to tailor our Ford NASCAR engines for what these racers want or need.”

Jacobson says, “We are going to do some testing with one of our engines as it is without any modifications first and then go back and work with it on the dyno. At some point we are going to make a swap with the crate engine and continue development, because I think we can really make a push in this series and hopefully gain some customers from it.”

The ULHRA has a lot of variation in the boats and engines in its series. Teams are running everything from small blocks to a lot of big blocks, some of which are carbureted and some are supercharged. “The class is direct drive and limited to a certain prop size,” says Jacobson. “There are a few propellers that are approved by the sanctioning body and we have to stay within those parameters. A lot of what we do will be dictated by the drag of the hull and other things. But from an engine builder’s point of view it’s a blank canvas and I can start wherever I want.”

Hydroplane boats are very abusive to engines, according to Jacobson, because they are run wide open a lot. “The engine unloads through the turns, so you’ve got to have the best components in the engines to make sure they live,” he says. “The engine builds are very similar to a speedway engine but we have to redesign the oiling system because the engines are facing the other way.”

Jacobson says GJM is also using this engine in a blown-alcohol application. “In this case we use the valvetrain and the cylinder heads as well as the basic outlay of the engine, but we use an aluminum block and custom intake with a blower and injector on top of it. “We’re looking at this from a whole lot of angles,” he says. “There’s a lot of interest in just about every area we are involved. Our mission with our shop is that we are broad-based in these markets – marine is just one of the markets that we service.”

GJM currently has 20 complete engines and spares on hand, all of which have been cycled out of RYR’s racing program. “They mileage the motors for NASCAR applications, but for our purposes they are brand new,” Jacobson says. “They may be at the limit of their bore and stroke combinations to meet the requirements of NASCAR but they’re fine for other types of racing. The limit is 358 cid, and we have them right on the edge of that. We can even bump them up to as high as 427 with a different crank. With the cylinder head package that we have, we can produce 900 hp with a single carburetor.”

Interest in these NASCAR engines trickles down to the street enthusiast market as well, says Jacobson. “We have a customer with a muscle car who wants a real NASCAR engine in his vehicle, so we can de-tune it a little and make it more streetable for that application. It will pump out 600 hp and be very driveable. So the market for us is very broad we think.”

However, Jacobson is quick to point out that that’s only part of the story. “That’s just the Roush-Yates part of our business,” he says. “One of our guys who used to work for Outlaw Engines and he does our mountain motor stuff – 700-800 cid engines for the drag racing market.”

One of the things a lot of people in this industry overlook is the marketing side of their businesses. Jacobson says he’s always been just an engine builder and not a salesman, so he’s thankful that his business partner Mark is very good at taking care of the sales and marketing side. “It works out well for me because I can focus on building engines and not chasing after the business so much. That’s always a problem when you’re a sole proprietor of a business like this; you have to deal with the customer issues and the vendors, suppliers and at some point in your 16-hour day you have to put in time at the shop actually working.”

Jacobson says he had a business plan in place before Garrett got involved, but it called for a less impressive facility. “We now have a new 11,000 sq.ft. shop with all the machines we need. We have a brand new DTS-4000 that we’ve upgraded to support 3,000 hp,” Jacobson says. “I wanted the ability to dyno these mountain motors that have nitrous or superchargers on them. I didn’t just want a warm-up dyno, I wanted to actually do some development work. We are also affiliated with another shop here in the Valley called Extreme Automotive who has a chassis dyno, which gives us some other options. They have the ability to run well over 2,000 wheel horsepower. We’ve had twin-turbo landspeed cars on it with no problems.”

Jacobson says GJM is not planning to do installations except for a few projects and promotional vehicles. That being said, the partners are keeping their options open for the future. And with the plan and vision they have already, that future looks bright. 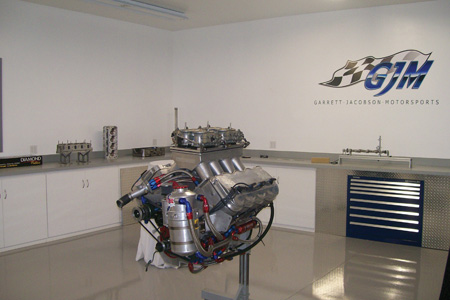 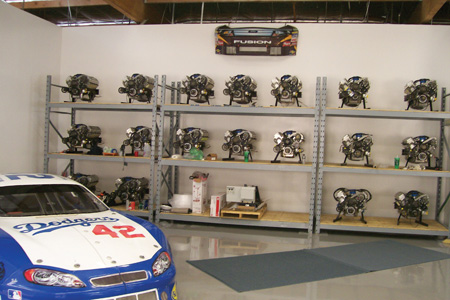