Such strategies are already very popular with those building small block and big block Chevys as well as small block Fords. In the main, it is a cost effective way to deliver what most customers deem as power – that is more low speed torque.

Generating extra cubes via a stroker crank is a good solid technique to gain more lbs.ft. even if nothing else is done to the engine. When entry level cast steel cranks (available in the aftermarket from a number of manufacturers) are used it is also a cost effective move. That factor alone makes it a customer-friendly engine upgrade.

To get the best of an increase in stroke some other complementary moves can be made to considerably enhance the  output and your reputation as an engine builder. Best yet, some of these moves may not add to the overall cost of the build because some of the components concerned would have had to be replaced anyway. There may not be space here to go into the theory of why I am proposing certain moves, but, rest assured, they are the result of considerable dyno testing not some crackpot theory.

Let’s start with the fact that getting an increase in output, that’s both torque and hp that is proportional to the increase in cubes is – for a motor that is a practical street powerplant – possible, but it does depend solely on making the right moves. If we are using a 350 with a .030? overbore and a 3.75? stroker for 383 inches the displacement has increased by 9.4%. If the engine was making good torque and hp before with a given CR and cam duration can we get a 9.4% increase when going up to 383 inches. For the most part, yes, and in some cases we can exceed the percentage capacity increase.

It may seem obvious but a great deal of time can be put into getting the stroker rotating assembly to clear everything in the crank case. When you order rods, go for the longest that will conveniently fit into the block. Don’t buy into the “short rods make more low speed torque” deal. I have never in numerous tests found a short rod to be superior to a long one in any of the popular domestic V8s. Also check with your crank/rod suppliers as to what rod-to-block clearance issues might be encountered.

There are many “stroker” rods with lower shoulders that still have potential to further lower them with a little custom grinding if the application calls for it. If the customer will stand the extra cost, go for an internal balance. If not, then I suggest you do a custom external balance where only the minimum amount of eccentric mass is used. Going with the regular external balance is the last resort but the least costly.

Longer stroke cranks have the potential for greater torsional vibrations, which can, in turn, affect the valvetrain. My own dyno tests have shown that inadequate torsional damping in a situation like this can cost 10 hp with ease. The fix is to use a new and functional damper with each build. Also a longer stroke crank has a propensity to dip into the oil easier. It pays to install a deeper pan and oil pickup. Just for the record, a half quart too much oil in a 400 cid small block Chevy can cost 12 hp at 6,500 if it gets entrained in the crank.

Most of the strokers I build tend to be both budget constrained and have to come in at a decently low parts cost.  For this reason, I tend to use a stout entry-level forged piston in 90% of my builds. Here I am looking at something to deliver sufficient reliability for a real thrashing on the dyno. I have had some pistons that did not go the distance, but, on the positive side, I can say I have had good results from lower priced pistons from several aftermarket manufacturers.

When selecting pistons be aware that in a stroker piston assembly-to-cylinder-wall friction is a major factor and increases as the stroke increases. The fix here is to use the thinnest cross section rings that the budget allows. Both DSS and Mahle have off-the-shelf pistons that have lightweight metric rings. When I get the Silvolite Icon pistons, I usually ask for their relatively low cost metric ring packs.

Still on the subject of piston friction, it’s worth knowing that the negative frictional issues of a longer stroke actually gets less as the CR is increased. The rule here is use as much compression as the fuel will allow as it will deliver not just on one but two counts.

This section is going to be short and sweet – at least it will if the budget allows for a set of aftermarket heads, and since we are on the subject of price let’s talk about that for a moment. I have, on more than one occasion, seen seats fall out of cheap aftermarket castings. The results do not look good nor are they cheap to fix.

Consider that just about every stock displacement 2-valve V8 is under valved. By increasing the displacement they become even more under valved. This means using the best flowing heads the budget will allow. It also usually means heads with greater port volume but don’t go overboard here as that will also cost in terms of both torque and hp.  If you want to see how the port volume affected a 383 small block Chevy stroker’s output then check out the University of  Northwestern Ohio’s website at “How to Build Horsepower” in the motorsports section.

Compared to 15 years ago we are in a very fortunate position of having a good number of effective heads available to us. I have had excellent results with as-cast  heads from AFR, Dart RHS, and Trick Flow and Edelbrock for both small and big block Chevys and small block Fords. Also all of the heads I have used have ported up to produce good results with, in most cases, little more than a basic porting job on what was already there. As for CNC heads I can say for sure the numbers are there with the AFR and Dart heads I have used to date. I am sure CNC heads in the other camps will also work but I have not dyno tested as of yet.

Make sure you use enough carburetion – this is especially important on big blocks of any type. For what it’s worth, the latest iteration of Holley’s HP750, on  a single plane intake,  seems to work very well on anything up to about 600 hp, which makes worth consideration. Also, if you intend to use a modern two plane with well developed port runners such as the offerings from Edelbrock, Weiand, and Professional Products be aware that their much higher efficiency runners demand a greater cfm to get best results than did older designs. If you are building a big block Chevy for anything that targets over 600 hp figure that a 4500 series carb will be needed.

Here we come to what might well be described as a hypercritical topic. Failure here can and usually does mean giving away 20 hp and 20 lbs.ft. of torque (and usually more) for no advantage in any other area. The first rule of thumb here is that whatever worked for lift before the stroke was increased needs to increase in at least the same proportion. That means either by the cam profile or rocker ratio or a combination of both. Also if the cam used before the stroke increase was perfect as far as event timing went, it won’t be after that extra stroke comes into play. If you know what the optimal lobe centerline angle is for a performance head engine with a stock displacement then figure that with the same heads but a bigger displacement the cams lobe center angel (LCA) will need to be tightened up.

Typically you can expect that for every 16 to 20 cubes increase the LCA will need to be tightened by one degree. Don’t get caught up in the delayed intake valve closure trap where the only change made is to delay the point at which the intake closes. Sure it will make more top end hp, but it won’t do anything positive as far as torque is concerned. You can maybe add a few more degrees duration but getting the LCA right will pump up both torque and hp.

Apply these cam spec changes along with the other mods suggested here and your stroker motors will be that much better. 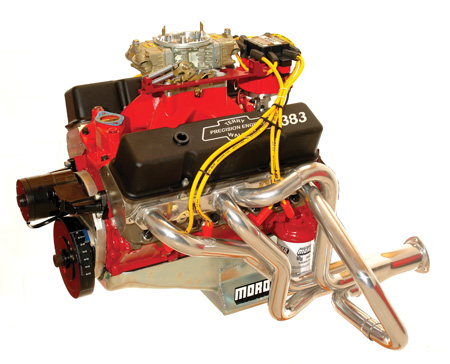