Most of the time, amateur racers are customers at the nationally known Kammer & Kammer Mopar High Performance Shop in Dayton, OH. Kammer says his business consists of about 65 percent racing and 35 percent street performance, and the most important thing he provides is a good relationship between himself and his customer. “When I was young, the speed shops didn’t seem to care whether I did business with them or not. I really believe that we’ve kept a lot of our customers by being attentive to them and listening to their powertrain problems. We show them around the place and explain exactly what we can and can’t do.”

The engine building facility initially started 26 years ago when Bob and his father, Joe, started supporting their racing activities. “We started in the family garage fabricating parts, but it kept getting bigger, so we had to move. The present building was purchased, and over the years has been increased in size to its present 20,000 square feet.”

At Kammer & Kammer, customers can always talk directly to Bob, and the second and third generations are already in the picture as well. Bob’s son and grandson, Ted and Brian, are both full-time employees and are involved in daily operations.

One thing about this unique operation is that customers can buy as much or little as they want. No pressure here, thank you. “We can sell them part of or a complete engine, work and maintain it, or anything else they want,” Kammer explains.

“Starting off, our customers normally want something that’s easy to run and learn with, along with reasonable upkeep,” Kammer says. His approach to dealing with amateur racers is an interesting theory. “Ninety-nine percent of the time, the guys who lose sight of winning have this overpowering desire to keep going faster. Of course, this means more and more money spent. I try to explain to them that they are going fast enough and occasionally discourage them from putting any more money into the deal. If they run out of money and drop out of the sport, we are both losers.

In the shop’s earlier years of operation, the concentration was on big block Mopars including both the 426 Hemi and 440 engines. But there was also work done on the 340 and 360 small blocks. During that time, Kammer says, he built his reputation with the normally aspirated engines using a variety of carburetors, from either a single four-barrel, dual fours, or six-pack set-ups.

Today, he says a customer will often bring in a street engine and ask for K&K to come up with the induction system for the greatest performance.

Kammer explains that interest in Mopar street performance currently seems to be centered on modern 5.7/6.1L Hemi upgrades. “We have bored and stroked 6.1L engines up to the 426 cubic inch displacement figure. We have used injection, supercharging and nitrous for street applications. And we are still involved in using the Gen 1 and Gen 2 Hemi powerplants.”

There is also considerable K&K involvement with 500+ cid Mopar big blocks for the street. “We also recently built a Mopar 400 engine with two four-barrel carbs for a ’33 Dodge truck. And we stroked a 340 small block to 400+ cubes with a four barrel that made 525 horsepower,” Kammer says.

Serious drag racers, as well as those who just want more power, all come to the Buckeye State shop for the sage Kammer advice. Bob’s customers have come from 20 states and often travel thousands of miles to dip into his vault of engine expertise, he explains.

However, Bob Kammer is a modest man and is eager to point out where he receives help. “(NHRA legend) George Montgomery, who also has an engine shop locally, has been a big help to me. We exchange a lot of engine information and I owe him a lot. I also have learned a lot from pioneer Mopar engine builders Don McElroy and Jack McCormick. There has also been a lot of assistance from Joe Stewart at Lane Automotive in Michigan.”

Kammer and Kammer has worked on drag engines up to 604 cid, combined with just about every induction system available, ranging from carbs to both turbos and supercharging. “We have one of the best in the business in Greg Perry who assembles most of our high-performance engines,” Kammer explains.

This Mopar engine master is quick to explain that the racing industry is continuing to grow more than any other part of the performance engine scene. But Kammer has some solid rules in dealing with the enthusiasts just getting into the sport.

“When a customer wants to get into the drag racing scene, I sit down and have a conference with him. The first thing I try to do is to get him into something that won’t be breaking a lot of parts in the powertrain. That usually relates to a ten- or 11-second machine.”

Certainly, a measure of the skill of an engine performance shop is the success (or lack thereof), its cars demonstrate in national competition. Under those criteria, the K&K operation stands very tall. NHRA activity is not just a pile of dusty trophies from the past, though, but is an on-going activity that looks to the future.

K&K has long been involved with Mopar corporate sponsorship through Jack McCormick Motorsports. This team’s cars are very familiar to national drag fans with their cold black paint scheme. Kammer’s western-Ohio speed shop built ten of the machines and established a number of national and class records between the early 1980s and 2004 in the Stock Eliminator Class.

Also during the early 2000s, Mopar corporate requested that K&K upgrade 50 318 cid MPI stock engines with better components for better performance in order to test new prototype transmissions. Bob explained, “We installed Viper Rods, Sealed Power Pistons, 360 cams, along with blueprinting and balancing the engines. We then dynoed the engines so that they would all have the same performance.”

That commitment to testing has continued in Kammer’s shop to this day. He says he realizes the importance of the quickly-increasing technology and he’s always ready to make maximum use of it

“We have the capability to do anything on engines and we also dyno all the powerplants we build. That way, we know exactly what the engine is capable of, and can instruct the customer on how not to abuse it and get the best service, whether for street or race use. We feel that it’s the best way we can support the customer,” he said. “We have a staff of seven full-time and three part-time employees.”

The impressive equipment and machine base consists of three dynos, two engine and one chassis. The 3,000 square foot fab shop has no match, Kammer says. “We have just acquired a 7,000-pound Haas CNC Mill machine which will initially enable us to fabricate a number of aluminum engine brackets, stainless steel engine washers and many other engine parts and bolt-ons in the future.”

Kammer says he knows his customers and, frankly, doesn’t want to deal with the heavy-hitter, big-money drag teams. “Those guys are real close to being where they want to be with their engines. I’d just as soon work with the amateur racers and enjoy the success they have.”

Although the initial plans for his operation were strictly mechanical, Kammer says there was no way he could avoid doing some merchandising as well. “At first, I just stocked some gaskets that I needed, but pretty soon, customers started asking me why didn’t I carry this and that?”

What has evolved is an extensive racing parts and pieces retail operaton in the front of the business. To many, that’s all there is to K&K, but those in the know are aware of all the heavy stuff going on in the back.

Kammer looks to the future and sees engine supercharging and turbocharging as the way to continue to boost performance in Mopar powerplants. “I also see the replacement of hydraulic cams with hydraulic roller cams. And?I predict a greater use of E85 fuel, which I think burns cleaner and cooler.”

Kammer & Kammer may not be the largest high-performance Mopar engine operation in the country, but the expertise it has demonstrated, the way it does business, and the success it has shown on the street and track has made it number one with its customers. 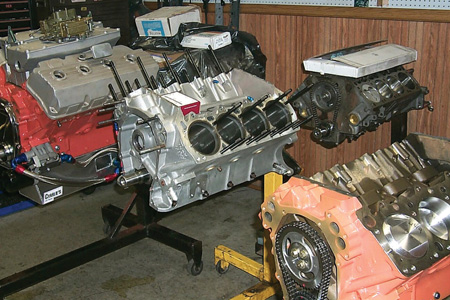 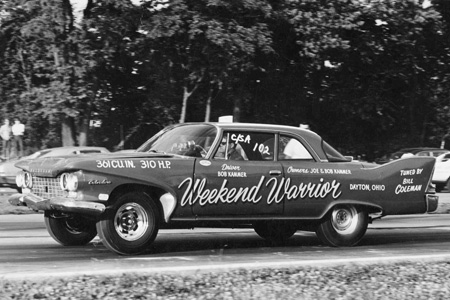 Features: What is Saenz Performance?

Women in Motorsports: Leah Pruett
Connect with us