While most of Osborne’s customers never even come through the Liverpool, NY shop’s door, their continued patronage has pushed Syracuse Crank to record sales figures over the past few years, he says.

“We were at 31 percent growth last year over the year before, and the year before last we were 26 percent higher.  Our sales have tripled in the past seven years. It’s an amazing time for us right now, and in these economic times probably a bit unusual.”

Osborne attributes his astounding success primarily to two things: attention to diesels and an aggressive embrace of online technology.

“We had been standard engine rebuilders for a long time,” says Osborne.?“When computers and fuel injection came along, I knew once they started managing the fuel we weren’t going to see the failures that we did when there were chokes on carburetors and that type of thing. We just decided in 1990 that we were going to get away from our roots, which were primarily racing and automotive/light truck. We started doing a little bit of diesel and found out how lucrative it was at that time. It’s turned into a very good part of my business.”

Osborne explains that when he decided to go after the heavy-duty business he quickly picked up a local transit authority as a customer. “They had 140 L10 Cummins engines to overhaul and we got the machine work out of those. That was two years worth of machine work for us.  We’d do 2 or 3 of them a week, and with 140 of them we just kept turning them around.

Syracuse Crank invested in necessary equipment to accommodate its bigger business model. “Once we had the capabilities with equipment it opened up the door with all the players in the market,” Osborne says.

He acknowledges that it wasn’t an easy decision to change his business. “Racing is where I cut my teeth…it’s what attracted me to engine building back in my teens,” he says. “High performance work, going to the tracks, being with race teams – it was a good time. But around 1990, I realized I had a family and had to think more seriously about the economics of it all. I was building race engines for guys who couldn’t really afford to race and wanted to do it on my dime.”

When the transit authority and the trucking companies started knocking on his door, says Osborne, he seized the opportunity. “They weren’t asking how much, all they wanted to know was ‘how soon?’ I could charge what I needed to, I would get a purchase order – it was such a change, I realized we really needed to go in this direction!”

Then, about seven years ago, Osborne says he saw the writing on the proverbial computer screen and jumped into the virtual business world as well. “We opened up our internet store (www.agkits.com) to sell diesel engine parts and started shipping products all over the world.”

Today, the internet provides the bulk of his sales growth, Osborne says. “We do agricultural, diesel, marine, and while there are certainly some gas engines in the mix, it’s probably 80-85% diesel, at least on the parts sales side. There are niche markets out there in the engine business and I just think, overall, diesel is the biggest piece of the pie.”

Taking a leap of faith for success isn’t a stretch for Osborne. “I started my shop in 1983 with a boring bar and a valve grinder and about $5,000.

I was working at a performance machine shop and I just couldn’t make any money. So I decided to go off on my own. I was 24 and fearless – actually, more afraid of what would happen if I didn’t start my own shop. I’ve always been willing to take chances. I don’t think anybody who has become successful has sat back and waited – they’ve had to be willing to take a big step and make things happen.”

That big step has taken him all across the globe. “The internet has gotten to be so strong, people have gravitated to it to buy everything. We ship all sorts of parts to engine builders all over the place,” he says.

“We’ve got customers in American Samoa who are tuna fishermen buying diesel marine kits. We have 20 engine kits being shipped to Egypt to a well-drilling company. We ship to Poland, to the Alaskan oil fields…the website has become its own self-sustaining business,” Osborne says. “I see 2011 to be the biggest we’ve ever had in terms of growth. I think it’s kind of turned into a snowball and it’s getting bigger and rolling faster.”

Osborne cautions against thinking that not seeing customers face-to-face equates to being able to skimp on service. “Whether it’s doing a valve job on a pair of heads or shipping an engine kit, we take every job seriously. It doesn’t matter if a guy’s walking in off the street or he’s placing an order online, it’s all important. The power of the internet can work for you, as it has for us, or it can work against you as well. There are a lot of chatter sites out there – forums – and your name can get spread around those in an instant. If you didn’t take care of a problem, you’ll get admonished quickly.”

Thankfully, he says, his company’s reputation for taking care of problems without question is a powerful one. “We’re finding that each day we sell to new customers who tell their friends – people call all the time and say they were referred by an uncle or a friend.”

For all his success, however, don’t assume that Syracuse Crank exists only in cyberspace. Osborne is still serving the flesh-and-blood customer as well.

“The machine shop business is okay, not what it was 10 years ago and may never be again, but what we’ve done on the internet to boost our parts sales has not only worked on its own but it has also helped our shop work. It’s brought in a lot of work that, without our store, we wouldn’t have had access to,” he says.

“Much of our customer base is off-road. We’re doing a Cat 3304 out of a loader; we work with construction companies and over the road trucking fleets,” he explains. “With a lot of dairy farms nearby the agriculture business is strong as well.”

In addition to tuna fleets in American Samoa, Osborne says the numerous lakes in New York provide a great deal of marine business as well. And he works with various municipalities to maintain industrial engines for wastewater treatment plants as well as numerous other projects.

Osborne says many customers are relieved to see he is still a “brick and mortar” business. “We also do work for other local engine builders. We’re one of the few machine shops locally with a crank grinder. We do balancing, crank work, line boring, crank welding with a Gleason crank welder – anything they need to have done we can do it,” he says.

“We have seen some premature cylinder head failures due to 2007 EPA mandated ultra low sulfur diesel fuels,” Osborne says. “Due to the lack of sulfur we have seen increased valve guide, valve and injector failures – we expect this will bring in new business.” Compliance with EPA regulations doesn’t only apply to his work with those cylinder heads. Like every shop owner, Osborne has to deal with cleaning and hazardous waste disposal issues. His solution? Do it right.

“We use a local solvents and petroleum service business that gives me an EPA manifest and does it all by the book. Any labor we perform gets a small environmental services fee added to it. Over the course of the year, that adds up. It’s a shared expense, because when we get the bill we have the revenue to pay for it.”

To clean a variety of parts, Syracuse Crank uses two jet cleaners: a big one with sodium hydroxide for diesels and cast iron parts; and a smaller machine for non-ferrous and aluminum parts.

The shop has eight employees: “There are three of us in the shop,” says Osborne (including himself). “And it takes 5 people to handle sales, internet and billing, etc. My son used to do both shop work and office work but he was too valuable to our internet side (he built the site and maintains it).”

For all his success selling parts through the website, Osborne says concern about liability with complete engines has kept him from offering them online.

“We’ve tried to stay away from complete engines on the web for the liability issue. We stick to the components – we sell the in-frame overhaul kits, new crankshafts, cylinder heads, connecting rods, anything you can imagine for a customer, whether it’s another machine shop around the country, or a rebuilder or someone doing the work themselves.”

The future rests firmly on the success of the internet, believes Osborne and since cyber sales are so consistent and so constant he anticipates continued growth in this area.

However he doesn’t see the dirty work going away entirely. “I’m the president but I have filthy hands. I don’t see machine work going away totally because there will always be cylinder heads and niche markets that we can do. Plus, these are my roots – machine work is something I don’t want to give up.” 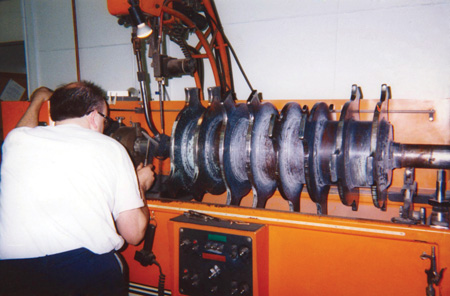