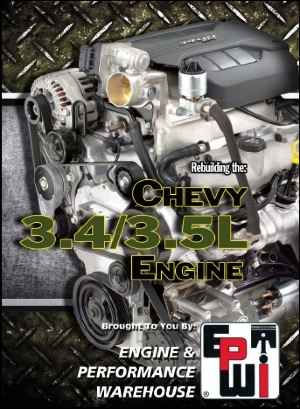 We’re going to take a look at two of these engines, including both versions of the latest 3.4L that was used in the Chevy Equinox (and Pontiac Torrent) and the original 3.5L that was installed in several ’04-’07 Chevy cars and crossovers. And, we’ll give you an overview of what to expect when you see the “late” 3.5L with variable valve timing (VVT) that was introduced along with the 3.9L in 2006.

Let’s start with the ’05-’06 3.4L Equinox that was built in Shanghai, China. GM called it RPO “LNJ”, but we know it as VIN code “F”. It shared the same bore and stroke as the 3.4L that was used in the FWD cars up through ’05, but it was updated in almost every possible way, starting with the block.

The Equinox had a unique block that had four more bolt bosses on the right side along with one more up high and two less above the pan rail on the left side. There were three different castings including the 12503385 and 12575190 that were used in ’05 and ’06 and the 12599542 that was used from ’07 through ’09. The only difference in the later block was the larger cam bore that was needed to accommodate the new 4X cam that had bigger journals.

The new crank for the ’05-’06 Equinox had a pressed-on sensor that had 24 notches instead of the earlier version that had seven notches machined directly into a cast ring on the crank. This same casting, the 12575064, was used from ’07 through ’09, too, but the earlier, two-piece, riveted reluctor wheel with 24 notches was replaced by a one-piece, machined sensor wheel that had 58 notches. The additional notches meant that the sensor inputs were faster and more accurate for GM’s new, high-speed computer platforms. Just for the record, these trigger wheels aren’t available separately from GM, so you will have to buy a $400 crankshaft if you damage a sensor.

The forged rods used in all the earlier 3.4L engines were replaced by powdered metal rods with cracked caps for the Equinox. They shared the same dimensions, but rebuilders will have to hone the big end oversize in order to recondition the rods. That’s not a problem, though, because the oversize O.D. rod bearings are already available in the aftermarket. Look for GKN 8537 on the big end of the rod.

Chevy updated the piston, too. It weighed the same as the earlier design, but the ring pack was relocated and the bottom groove for the oil ring was about 1.0 mm narrower. The OEM piston is a Mahle 92L62.

The Equinox has a new timing set that has a narrow chain and gears along with a fixed chain guide. The chain measures 10.0 mm across the links instead of the 14.0 mm and the gears are about 0.110? narrower.

GM continued to use the same head castings with the smaller water outlets that were originally installed on the ’04-’05 3.1L and 3.4L car engines, but with a couple of differences:

2) Most, but not all, of the Equinox motors have a temp sensor located on the back of the head on the passenger side, so most of the heads have this additional hole, but it can cause problems whether or not it’s drilled and tapped. Here’s why:

• The hole on the back of the head on the passenger side must be drilled and tapped because it’s usually needed for the temp sensor, but be sure to plug it just in case it’s not used for a particular application.

• If there’s a hole in the front of the head on the driver’s side, it must be plugged, because it’s never used and it’s impossible to install the plug once the front cover is on the engine and it’s in the car.

So, that’s the story on the 3.4L Equinox. It’s similar to the earlier 3.4L car engines, but with several important differences. Chart 1 gives a quick recap of the changes compared to the ’05 FWD car engines.

As you can see from that chart, the ’05-’06 Equinox was all new except for the cam and heads, and by the time the cam was changed in ’07, the heads were the only thing the Equinox shared with the earlier FWD cars.

With all that in mind, now let’s take a look at the 3.5L engine that was introduced as the “LX9” in ’04 and used up through ’07 in the Buick Rendezvous. It was a VIN code 8 or L and it came without the variable valve timing that was added to the LZ4/LZE (VIN code K or N) that showed up in ’06 along with the new 3.9L engine.

The “LX9” was basically a bored version of the 3.4L Equinox, but the cam and the timing set were the only two major components that were shared by both engines.

There’s only one block for the early 3.5L that was used from ’04 through ’07. It’s a 12581558 casting that has “3.5L” located right beside the casting number. This block is unique because it has a few more bolt bosses on the sides and a flat pad that’s machined on the bottom of the main oil gallery for the piston oil cooler that sprays oil up on the back two cylinders to “ensure even lubrication of the cylinder walls” and “reduce noise.”

The early 3.5L crank has “3.5L” cast right on the front rod throw and a two-piece, riveted 24X crank reluctor wheel that’s pressed on a stepped surface located between the #3 the #4 rod throw. It looks a lot like the 3.4L Equinox crank and it shares the same 3.31? stroke, but the rod journals are about 0.240? larger in diameter and edges of the small counterweights are chamfered.

The rod for the 3.5L is powdered-metal with a cracked cap, too, with larger bores on both ends, but it’s slightly shorter between the edge of the bores than the one that was used for the 3.4L. There is no ID number on these rods, but there’s a raised “hump” across the cap beside one of the rod bolts.

The head for the early 3.5L is unique to this application. It’s a 12578523 casting that looks similar to the ones found on the 3.4L engines, but both the intake and exhaust ports were modified and the chamber was revised, too, so they’re actually quite different when you see them side by side. Just remember that there must be a hole for the temp sensor on the back of the head on the passenger side, but don’t leave an open hole in the front of the one on the driver’s side.

That’s about all you need to know about how to identify the early 3.5L, but there’s another 3.5L that was introduced in ’06 that shares 80% of its components with the brand new 3.9L engine. It’s the RPO “LZ4/LZE” motor that carries VIN code K or N and it’s used up through today. Here’s what to expect when you see one:

Block – The late 3.5L shares an all new block with the 3.9L engine that comes with a 3.90? bore. It has piston oil cooling jets on all six cylinders and casting provisions in the valley for the “lifter oil management assembly” that was part of the “active fuel management” (AFM) system that was added to the 3.9L engine when it was used for the Impala starting in ’07. We have a 12577641 casting, but it appears that there are three or four blocks with minor differences.

Rods – They’re powdered metal with cracked caps, but the length is different because GM combined the shorter stroke with the same piston that was used in the 3.9L. The rod has the larger pin bore because it’s bushed for a full-floating pin.

Pistons – The late 3.5L and the 3.9L share a common piston. It’s a Mahle 99L16 casting with a small dish, four valve reliefs and pin locks.

Cam – The late cam has the big journals, the “4X sensor,” and provisions for variable valve timing, but the lift and duration are unique to this particular application. It’s a 12591840 that has “1840” etched on the back of the last journal.

Timing Components – The timing chain and gears are the only components that are the same as the ones that were used on the early 3.5L, but there’s a new tensioner that replaces the old chain guide.

Variable Valve Timing – The big change in the “late” 3.5L was the addition of variable valve timing (VVT). “This system incorporates a vane-type cam phaser that changes the angular orientation of the camshaft, thereby adjusting the timing of the intake and exhaust valves to optimize performance and economy and helping to lower emissions,” according to GM. The cam has bigger journals and a “4X sensor” and it’s unique to this application. The front cover has a “black box” with a computer controlled “magnet” that pushes on a valve that’s located in the middle of the cam phaser. It in turn applies oil pressure to either side of the vanes to advance or retard the cam in real time. It can advance the timing up to 15 degrees or retard it as much as 25 crankshaft degrees to “optimize performance and economy.” GM claims a fuel savings of up to 3% with VVT. It also eliminates the need for an external EGR system because it gets all the EGR it needs by retarding the cam and increasing the overlap. It’s pretty high-tech for a pushrod V6, but it works fine and does a good job.

Heads – The heads are all new and shared with the 3.9L. They have big intake ports, modified chambers with bigger valves and updated exhaust ports. And, the water outlets were moved from the intake surface to the front of the heads. We know of two castings, the 12590746 and 12624610 that come with or without holes drilled for A.I.R.

Head Gaskets – The late 3.5L has MLS head gaskets instead of the Grafoil ones that were used on the ’07 3.5L without VVT.

All in all, it’s a whole new engine that we will research in more detail when cores and parts become more readily available. Meanwhile, just be aware that both engines were used in ’06 and ’07 and verify the VIN number and application before selling one or the other.

That’s the story on the 3.4L Equinox and the early 3.5L. GM continues to build some of the best pushrod motors in the world. The LS motors are well respected and so are the “high value” V6s including the 3.4L, 3.5L and 3.9L. The level of sophistication in these little motors is amazing, especially when you take a look at the 3.9L with variable valve timing AND active fuel management, all working together to provide good performance and economy along with low emissions. It’s an amazing feat of technology that will soon be showing up in all our shops.

Doug Anderson is Manager of Technical Services for Grooms Engines, located in Nashville, TN. He has authored numerous technical articles on engine rebuilding for Engine Builder magazine for more than 20 years. Anderson has also made many technical presentations on engine building at AERA and PERA conventions and seminars.