In this case, “best” power means that the engine does exactly what the driver – regardless of racing type – wants it to do,  when he wants it to do it. It also helps the driver’s winning percentage if the engine makes it to the end of the race. Remember that old saying: “To finish first, first you have to finish.”

The basic foundation of a high performance engine – or any engine for that matter – is the block. The difference between an OEM block and a “race” block, however, is that the tolerances allowed in OEM applications just won’t do for high performance applications. It is not uncommon for bore locations to be as much as .030? off in OEM blocks. It is important for the bore to be square with the centerline of the main journals; again, OEM blocks are always off. Aftermarket blocks are generally much closer and won’t require as much work to get them where they need to be.

The quality of the junkyard block is another issue. It is not uncommon to do a bunch of machining work to a junkyard block, and then find a problem with it; I can see all of you nodding your head at that statement. Simply put, due to advancements in design and technology, the junkyard blocks will never be as good as an aftermarket block is today.

Better aftermarket parts, better metallurgy and a lot of R&D will help continue that horsepower increase. Several manufacturers of aftermarket parts have put much of their R&D money into finding ways to improve block design.

“The OE typically makes the same block from an early print designed for a passenger car or light truck and isn’t specifically targeting the aftermarket racer,” explains Todd Goodwin, Goodwin Competition. “They typically lean towards cutting costs and reducing material in order to make a lightweight casting. However, the modern racing engine builder has raised the horsepower output of these engines that overstressed the OEM castings.”

The most popular engine for performance and racing applications is the venerable small block Chevrolet. Since being introduced in 1955, more than 55 years ago, it is still in high demand. And engine builders continue to squeeze performance out of them, too!

That first Small Block Chevy came out at around 162 horsepower – today these engines easily put out 900-plus horsepower in naturally aspirated configurations; even higher in blown or turbo-charged applications.

At one time you had little choice but to scrounge a junkyard block or order a new block from your car dealer. During the late 1970s and ’80s, anyone using small block Chevrolets in racing had the option of aluminum blocks from Rodeck or Donovan.

The fledgling World of Outlaws Sprint Car Series was one of the first to allow the use of aluminum blocks. Other organizations either totally banned them or required additional weight added to your racecar if you used an aluminum block. However, many sanctioning organizations outlawed them because of cost, not realizing that they were less costly in the long run because of their repairability. When organizations began to allow these blocks, they became more available to racers.

A lot of circle track racers went to an aluminum block if they could afford it and if the blocks were legal in the series they raced. Many learned that an aluminum block could outlast a cast iron block, enough so that they easily became less costly to use in the long run. If one did break, they could be easily repaired in many cases.

However, cast iron was available in the aftermarket as well.

Dart Machinery actually entered the block business by manufacturing the “Rocket” block for General Motors in the 1980s. That block became the “Iron Eagle” cast block that they later introduced as one of the first aftermarket companies to unveil a cast iron small block Chevy.

At about the same time, World entered the market with its Merlin line of blocks for the Big Block Chevy. Today, both companies have complete lines of small blocks and big blocks in both cast iron and aluminum. Ironically, both companies started out manufacturing aluminum heads. World has offerings for Chevrolet, Ford and Chrysler configurations. While Dart has blocks available for Chevrolet and Ford. These companies and others in the aftermarket continue to improve their products through extensive R&D.

What all the manufacturing companies have done is to continue to improve their designs. They have found the weaknesses and engineered the blocks to be stronger where needed. Of course, with these blocks being intended for high performance applications, they are also held to better tolerances right from the casting process.

“Today’s tooling allows us to cast parts that have better controlled tolerances, especially when you are not trying to mass produce them to build millions of engines for cars,” says John Keyes, Wheeler Power Products. “Overall, the tooling, materials, machining process and casting techniques have vastly improved. We can now cast a better part, machine a product and hold tolerances much tighter than in years past, and the scrap rate and failure rate is minimal.”

According to Dart’s Jack McInnis, Dart uses all the critical dimensions from an OEM block, but then re-engineers the design. For instance, they will add material where it may be thin, increase cylinder wall thickness, allow for larger lifter bore diameters and add other dimensional improvements as needed. Dart will also rework the oiling systems for better oil control, among other improvements to the original design.

According to many of our experts, although a wide variety of blocks are available in cast iron, cast aluminum and billet, as well as specialty items like the CGI blocks offered by several manufacturers, cast iron is clearly the highest selling item of the group. For the masses, experts say, iron is perfect: the cost is reasonable, the features that are built in make them significantly better than an OEM block, and they are significantly more durable, and allow for much larger engines with siamese bores and thicker cylinder walls. Cast aluminum is used in many higher levels of racing where weight is a concern such as super late models, dragsters and even in some of today’s heads up racing organizations.

It all comes down to metallurgy. The materials today are much better than that used in the past. “We are very critical in our metallurgy,” says Dart’s McInnis. “We keep a very close eye on the metals being used in the casting process, to be sure it is what we have specified.”

Of course, all the top manufacturers have their own formulas for the materials that are used in their castings be it steel or aluminum. Exact formulas are proprietary, but for instance, Dart uses a 355-T61 alloy for their aluminum blocks, while World uses a 357-T6 alloy. Donovan uses a B356 alloy. Most other manufacturers of aluminum blocks use a 356 alloy.

The differences in the materials are the trace elements that are in the different formulas. For example, more or less copper can enhance the elongation properties of a block. A lot of science goes into the casting process and no one thing is too small; it’s the little things that are enhancing the quality and integrity of not only blocks but also most high performance parts.

A concern about weight isn’t just vanity – it can be a significant amount. As one example, look at the differences between two different engine blocks from World Products. An aftermarket Chrysler Hemi block from World weighs 294-305 lbs. in iron or CGI. In aluminum, it weighs in at 142 lbs.

A lot goes into the physical construction of a block as well as its chemical design. “There’s more to designing a new block than just taking a stock block and reverse engineering it,” explains Wheeler’s Keyes. “Sure we use the OEM blocks to give us the basic dimensional shape we need to work with, but from there we make many improvements. We have to remember when OEM blocks are made they are being built for mass production vehicles making less than 400 hp and being driven mildly.”

While a junkyard block will require extensive machining to bring it up to spec, most aftermarket blocks will be very close and require very little machine work. For instance, the bores will be in the right place and will be squared up with the crankshaft centerline, as will the deck. Bores in OEM blocks can be off as much as .030?. Keep in mind that the higher the performance, the more exacting block preparation needs to be.

“When installing sleeves in our blocks, we hone each hole to fit a particular sleeve,” says Dart’s McInnis. “We don’t just use an average number, we measure each sleeve.”

“Custom” is quickly becoming the norm, at least in some circles according to our experts. Goodwin says Billet blocks are gaining popularity in the Pro Extreme classes where anything within your imagination can be designed and manufactured, and cost is less of a factor. The structural integrity is far superior to a cast aluminum block.

“Billet is the only material that is dense enough and strong enough to take the abuse of racing without cracking,” says Chuck Nuytten of CN Blocks. “And the guys wanted it light. However, the term ‘billet’ is used pretty freely out there, just because you take a chunk of material and call it billet, it isn’t necessarily true. There is a lot of garbage out there.”

Nuytten says CN is a family business and they jumped into the billet block manufacturing business cold. Through a lot of R&D they now have a complete line of billet blocks for nearly any hard-core performance application.

Billet blocks are typically used in very high end forms of racing, where weight is a concern, and also where pushing the limits of iron blocks needed to be overcome. So billet allows anyone with a design, an idea, and the money to be able to make something. “In today’s Nitro classes the blocks are billet, Pro mod classes are pretty much all using billet blocks today. Bar none, that’s the best thing to use in that environment,” says Keyes.

Dart also offers a line of CNC Billet blocks, using a forged 6061 aerospace alloy with a proprietary heat treat process. While McInnis says the cost is probably twice that of a cast aluminum block, the billet blocks offer some great advantages.

The two best advantages a CNC billet aluminum block are the repairability and the easy customization. While a cast iron or cast aluminum block will break or “window” virtually anytime you have a failure in the bottom end, a billet block will normally absorb the impact, much like a catcher’s mitt absorbs a Randy Johnson fastball. In most cases, any damage can be repaired with a TIG welder.

Besides the strength, perhaps the biggest advantage of the CNC machined billet blocks is the virtually unlimited customization opportunities.

Because they are CNC machined, every block starts out as a solid chunk of aluminum. You just need to write a program for your own design. The engine building business – at least high performance engine building – is moving towards customization. Engine builders are spending a lot of time on the dyno and want parts produced to their specifications, including blocks. While some customization is possible with cast blocks during the machining process, you can get a truly customized one-off design with a CNC machined billet block. No, it isn’t quite that simple, but you see what direction I am stepping in.

For engine builders, there are more choices out there than ever. Take advantage of the knowledge of the block manufacturers and build the best engines ever. 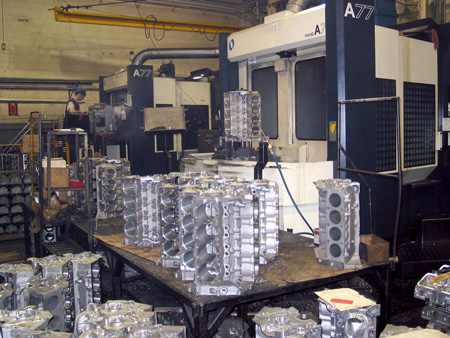 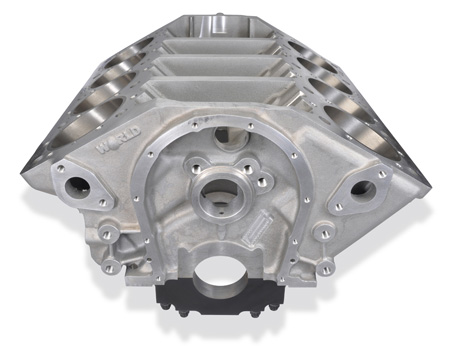