One of the first things to look at when building an engine is the oiling system. Dry sump systems are very scalable and efficient but are not known to be inexpensive by any means. Wet sump systems, on the other hand, offer affordability and can handle some impressive performance applications, but using all stock components may not be the best solution for keeping the engine out of your shop during the season.

Companies such as Moroso, Canton Racing, Melling and others offer a variety of components for whatever your oiling system needs may be from pumps to pans. We asked a number of suppliers about products grassroots performance builders could use to make the most of their engines.

“For the most part, grassroots racers require the same things from their oiling systems now that they have since racing began,” says Brandon Hamm, Canton Racing Products. “They are looking for a cost-efficient way to keep their oil pressure at normal levels when they need it most. This type of oil control may come from a baffled, aftermarket pan or an oil accumulator, such as the accusump, or a combination of the two.”

Moroso’s Thor Schroeder says his company recently introduced a line of complementary products to address the needs of the grassroots racer. “One of our biggest introductions that is very applicable for Engine Builder readers is our line of Small Block Chevy oil pans that are the first of their kind. They look stock but will take up to a 4.125? stroke, fit on Dart, GM and Merlin four bolt main cap engine blocks. They are available to fit pre-1980 style engine blocks, ’80-’85 with passenger side dipstick blocks and 1986 and newer engine blocks with a one-piece rear main seal.”

Schroeder says Moroso is introducing new SBC oil pans with 7? deep sumps with extra capacity that are baffled for road racing applications and will clear 4.15" stroke. He says the new pans will fit C-3 and C-4 Corvettes, kit cars and other low ground clearance applications.

There are many schools of thought on what requirements an engine builder wants from a performance oil system, say experts. “Oiling requirements range from standard volume, standard pressure to high volume, high pressure and everything in between,” says Melling’s Paul Hauglie. “At Melling we have a wide selection of wet sump pumps to accommodate these needs.”

Increases in an engine’s oil requirements come from running at higher rpms, being able to rev faster, increased bearing clearances, remote oil cooler and/or filter and any combination of these. Most high volume pumps also have an increase in pressure to help get the oil out to the bearings faster.

The equation is involves viscosity as well as volume, say our sources. If the engine needs 10 gallons of volume with 10W oil, it might only need 7-8 gallons with 50W oil. Because the viscosity takes up the clearance. If you don’t have viscosity, you have to have a lot of volume to keep the clearance separated.

“The old adage that a high volume pump will suck the pan dry is incorrect,” says Schumann. “The engine is going to consume what is built into it for total clearances with the viscosity of oil at a given rpm. If you have things out of sync, or a standard volume pump that can’t keep up with the clearances or the thin viscosity, then you have metal-on-metal contact.”

Melling’s Hauglie says that a high volume pump is not always the answer to an engine with low oil pressure either. He says the engine’s oil pressure is a result of how much resistance you have to the flow of oil. “It would be good to look at the late-model performance engines (GM LS, Ford Modular and Chrysler/Dodge Hemi). Also look at the priority oiling systems being used by aftermarket block companies such as Dart and the use of standard volume oil pumps instead of high volume oil pumps.”

All the suppliers we spoke to said they have oil system products for several forms of racing, but most agreed that circle track applications had the highest demand for these components.  “Circle track racers require oil pans specific for making left turns only,  which makes the oil pan and oil system a necessary upgrade for every racer,” explains Canton’s Michael Zeranski, Jr. “They are the biggest users of parts as they frequently need to replace parts that get worn out or damaged during week after week of racing, or they need to update their equipment to stay competitive.”

Drag racers may not wear out as many components, according to suppliers, but they still need upgraded oiling systems. Canton’s Hamm says his company offers an oil pan for Mark IV BBC designed for hardcore racers, with features like trap door baffling, an oil recovery pouch and a built in louver-style windage tray. “Besides oil pans, we sell an entire line of high-performance oil filters, billet aluminum oil filter adapters, and filter relocation kits. One thing that we are most known for is our accusump, which we feel is an essential part to any oiling system and serves as the best insurance policy for your engine.”

Schumann says a lower volume pump for small block Chevy drag racing applications has been a big seller. “We make a drag pump with a 1-inch gear for SBC. It actually shows dyno power gains and we’ve sold quite a few over the last 3 years. Standard size pump for SBC is 1.200? and 1.500? is high volume. The one inch pump is really all you need; it puts out 7 gallons and gives you 68 horsepower.”

Schumann says the rule of thumb to determining what you need comes from the OEM. “They try to calculate the gallons the engine will consume at idle, moderate speed and high speed. And the oil pump they use is 25 percent larger than what the engine needs. And it makes up for later in life when the engine is worn out and the tolerances are bigger, requiring more oil than it did new. So that’s the teeter totter balancing act.”

“For high end builds we offer our Melling Select billet aluminum pumps for small and big block Chevy engines for both drag and circle track use. All of our billet oil pumps, and several of our cast iron pumps, feature our patented outboard shaft support. We also feature a full line of Melling Select Performance pumps for the late-model GM LS, Ford modular and new Hemi engines.”

“There are crank windage advantages from running a dry sump, meaning the crank does not have to turn through the reservoir of oil in the oil pan resulting in less friction,” explains Kevin Rumley of CV Products. “With dry sump systems you can ask the pump to act like a vacuum pump to lower the pressure in the crank case lower than the intake manifold. This allows you to pull the waste gases out from around the ring pack of the pistons so the expelled fuel air mixture does not dirty up the fresh charge coming into the cylinder. This results in about a 1 percent gain in volumetric efficiency.”

Canton’s Hamm says another benefit of the dry sump system is that it is virtually impossible to run the oil pumps dry as the oil tank stores a large amount of oil, which then gets pumped directly into the oil galleys.

Yet, despite all of the advantages of a dry sump oiling system, they only represent a small segment of the market and are not in many racer’s budgets. “If you go to a local race track, 90 percent of the engines are wet sump,” says Schumann. “A $4,000 oil pump on a $30,000 to $40,000 engine is still a large percentage of the bottom line.”

He acknowledges that a dry sump system is reusable, but reminds users of maintenance requirements. “The worst thing is that if you get a novice who doesn’t clean the system completely, then guess what the next engine does?” he asks

It isn’t just untouchable technology, however. “There are production cars out there that have OE dry sump or external oil pump oiling systems,” he says. “Two such examples are the Corvette ZR1 2009-up and several Porsches,” says Schroeder.

“In a lot of racing classes dry sump systems are not allowed, so a company like Moroso comes up with products such as baffled oil pans with trap door assemblies that keep oil in the oil pump pick up area during acceleration, de-acceleration, and cornering. The Moroso billet aluminum wet sump oil pumps for small and big block Chevy have a mounting area three times larger to prevent breaking and weigh one pound less than stock oil pumps,” Schroeder says. “And pick up inlet areas are increased to prevent cavitation, and thrust bearing assemblies increase housing and gear life due to drive shaft axial forces on the drive gear. Lastly, our oil accumulators also help with the performance of a wet sump oiling system and as an added bonus also prelube the engine before start up.”

Schroeder gives these words of wisdom for engine builders to keep in mind when choosing an oil pump and pan for a particular performance application: “Upsell from a generic, one-size-fits-all system to one that is specific for the type of racing and/or chassis your customer is using. Engine builders should stay current with what the manufacturers are offering and if they have a question do not be afraid to call the manufacturer’s tech line.”

Another consideration when making a sale on components for an engine build, is this: don’t forget the oil pan. “Especially if it’s an aftermarket engine block or if the engine and chassis combination are unique,” says Schroeder. “There is still the mentality out there that it’s just an oil pan – but the oil is the lifeblood of the engine and the oil pan has a very important role, too.” 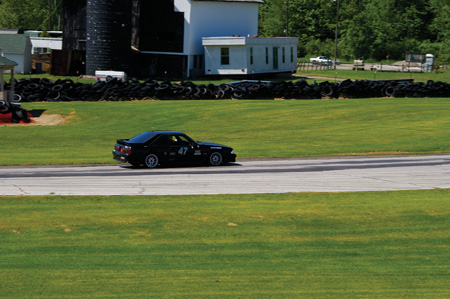 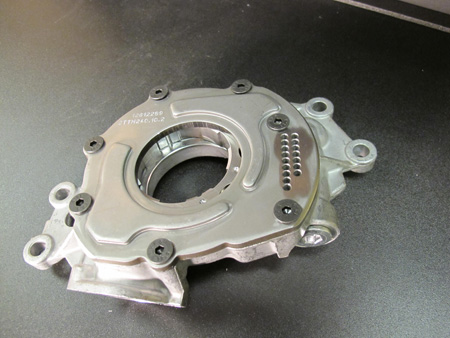