Despite the recession, motorsports continues to grow. This coming December, the International Motorsports Industry Show and the Performance Racing Industry trade shows expect to welcome a combined 2,000 exhibitors and more than 65,000 attendees to see performance products in Indianapolis and Orlando. These shows are a virtual who’s who of the racing industry as you must be directly involved in racing to attend.

We normally think about racing in two ways: around and around a track or in a straight line. While NASCAR likely tends to dominate our circle track perspective and NHRA may top our thinking about drag racing, there are literally dozens of sanctioning organizations for anything from lawn mower racing to airplane racing, with just about anything you can think of in between. Many performance engine building shops have been able to exploit some of these niche markets – and you can too.

If I mention Off-Road racing, it’s likely that many of you will envision pick-up trucks racing around an indoor stadium on a course made popular by Mickey Thompson, an outdoor facility such as Crandon, WI, or the desert races such as the Baja 1000. However,  just like those other associations that thrive despite NASCAR and NHRA’s familiarity, there are many organizations that sanction off-road racing, many not even heard of outside their immediate racing family.

Remember, racers will race anything – and anywhere. No paved surface? No problem. Mud Drags, Sand Drags, Swamp Buggies, and Mud Bog racing are just a few of these off-beat types of racing about which certain racers are extremely passionate. We are going to concentrate on Mud Drag Racing and Sand Drag Racing in this issue. If you are already involved in building drag racing engines, these will be markets that will be easy to get into.

Perhaps the largest organization involved in different types of  off-road racing is Family Events/The Promotion Company of Indianapolis. For more than 35 years, they have been promoting motorsports events such as Mud Drags, Tough Truck competitions and Monster Truck Racing.

As always, if you are looking to get into these markets, you need to do you research and first get a copy of the rules.  A visit to the websites of any of these organizations would be a good “first start” to see what awaits you in these markets.

You should also get out to an event or two in order to see what the racers need and what they are using. Keep in mind, someone is already building engines for these racers, but if you can build a better “mousetrap” you can be successful in these niche markets.

This class is for all mini-trucks and Jeeps with stock 4- and 6-cylinder engines. Must present current license plate and registration for racing vehicle.

2. For all mini-trucks and Jeeps with stock 8-cylinder engines.

3. Must present current license plate and registration for racing vehicle.

The same rules as for Class 1B apply, with the exception of rule 4. For Classes 1A, 1B and 2, a stock engine and transmission are required (although engine swaps are allowed). Maximum 4-barrel carburetor, naturally aspirated (factory options allowed) engine.  No aluminum heads or raised runner heads are permitted.

Any factory production automotive type engine is permitted (engine medications are permitted), although aluminum blocks are not permitted. Maximum of single 4-barrel carburetor, split Dominator allowed, naturally aspirated. While factory options are permitted the engine must be in front of the firewall. Engine set back can be no more than 12? from center of front axle to #1 sparkplug.

1.Any body or chassis, 150? Maximum Wheel Base, Factory or Tube Frame

Engines must be naturally aspirated – no turbo or supercharging permitted. Rear engine configurations are permitted.

1.Any body or chassis, 150? Maximum Wheel Base, Factory or Tube Frame

1. Any body or chassis, 150? Maximum Wheel Base, Factory or Tube Frame

As you can see, there is something for everyone and any shop should be able to tap into this market.

In fact, the Stock classes may be a great opportunity for a shop that can get maximum horsepower from them. We all know it’s much easier to get horsepower using nitrous, turbocharging, or supercharging.

The National Sand Drag Association much more closely resembles NHRA or IHRA Drag Racing, albeit on sand. They have the following “Pro” Series classes:

1. Top Fuel – Like their NHRA counterparts, they are Nitro-powered, 8,000 horsepower machines that accelerate from 0-160 mph over a 300 foot track in 2.3 seconds. This class has virtually no rules other than safety.

2. Top Alcohol – Methanol burning, leaving the line at 7,000 rpm, this class is nearly as quick as Top Fuel on the 300 foot track.

3. Top Eliminator – Similar to Top Fuel, but this is an index class, meaning they must run within a specified time of no faster than 2.950 seconds.

4. Super Eliminator – Similar to Top Eliminator in that it is also an index class. In this case the index time is 2.800 seconds on the 300 foot track.

This organization also has other classes similar to the NHRA and IHRA such as Pro Bracket Classes, Pro Specialty Classes and Sportsman Classes.

While the surface each type of racing competes on is different than the NHRA or IHRA, the engines as well as some of the chassis are similar. Many of the parts used are also similar. The key to these machines is in the setup of the chassis, along with some other factors. Of course, the racers all want as much horsepower as they can get and this will never change, no matter what motorsport it is.

The engines are quite similar to their NHRA/IHRA counterparts, pretty much identical, in fact. Fowler Engines in Columbus, OH, is a well known builder throughout the country. Fowler Engines builds blown alcohol motors for a variety of applications, including drag racing, tractor pulling, mud racers and sand drags.

According to owner Jeff Fowler, the engines are nearly identical for all those applications with the only exception being the blown big blocks used in tractor pulling. The main difference, Fowler explains, is in the fuel system. While drag racing applications need most of their fuel at the start to midway point in a run, leaning out at the finish, pulling tractors require minimal fuel at the start, but require maximum fuel delivery mid-run through the finish.

These differences are seen, Fowler says, because of the transfer sled used in pulling, the load increases as the tractor goes down the track. In drag racing the biggest load is at the start and decreases throughout the run.

If you are already building drag racing motors, then you are well equipped to tap into the Mud Drag and Sand Drag markets. Get out to a few events and discover the possibilities of this niche market.

For more information check out the following websites:

• West Michigan Sand Dragway is one of the premier sand drag facilities in the U.S. The track hosts 13 races from May-October – www.SandDragways.com 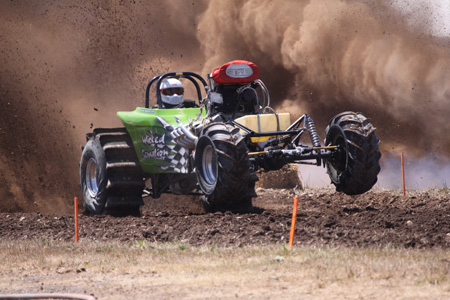