Sometimes, owners with tuners or power enhancers have the capabilities to read trouble codes if something happens. But this may or may not point them in the right direction.

A great example is one that came by the shop the other day. The owner had an ’03 6.0L Power Stroke that had lost power. When he pulled into the parking lot I could hear that the engine had an audible miss. The first thing was to reach for the scan tool and see what trouble codes were found.

Next, I took a look at the trouble codes. There were trouble codes pointing to the fact that cylinders 1, 3, 5, and 7 had a contribution problem. This was more or less saying that these cylinders were dead. So, how bad was the engine missing?

One thing that is common on the 6.0L DIT engines is what is known as injector stiction. Now I didn’t know if this was the problem so I had to probe a little deeper.

When the open coil energizes, the spool moves one way and when the closed coil energizes the spool moves the other way. This movement of the spool valve is only .017?. When the open coil is energized, the spool valve moves to allow high pressure oil in from the rail to flow into the injector. When the closed coil is energized, oil is allowed to drain from the injector into the crankcase.

The coil is energized by the FICM (Fuel Injection Control Module) for 800 millionths of a second. Think about that: it is impressively fast to move a spool that quick when it is under the intensity of high pressure oil.

Put it this way: let’s say the engine is at idle and the high pressure oil is at 600 psi. When the open coil is energized, the high pressure oil comes into the injector and the piston and plunger move downward. The pressure of the fuel in the delivery chamber being forced through the tip of the injector nozzle will be 4,200 psi. Now realize that if the engine is at WOT, this would be 21,000 psi!

There are several things that can cause stiction of the spool valve. One of the biggest reasons is the type of oil being used along with the viscosity. These engines can be very picky about oil. It is not that there are bad oils on the market, but some are better for this engine than others.

As you can see, these engines use hydraulic pressure to operate high injection pressures. On thing that tends to influence hydraulics is the amount of air that can be entrapped in the oil. It doesn’t matter if we’re talking about an earth mover, hydraulics do not like air. Air in the oil causes foam. When foam enters the injector, it will cause misfires and rough running due to the “fake” injection pressures the foam is producing.

One thing that you have to remember is that all of the oil is going to foam after being churned by the pump and slung around in the engine. But, there is only one way to release the foam: manufacturers use silicone as a release agent. So most of the time, I will use the engine oil that the manufacturer recommends. Manufacturers of vehicles know what the engines need and have to stand behind their products.

Going back to diagnosing, you have to have the proper tools. There are scan tools on the market that will show a lot of data and the trouble codes. There are also scan tools used by the dealer which we can’t afford. But in order to find out what is happening with the 6.0L injector, you need a tool that can actually see the injector spool times. One tool that I have found in the aftermarket for independent garage and individual use is from Hickok Incorporated. It is called the G2 Diesel Injector Tester and is for diagnostics used on-board while the engine is running.

The G2 is the most valuable tool in my shop for properly diagnosing the 6.0L injector. The reason for this is that a lot of times when you have a couple of injectors that may have issues, some shops feel they have to replace them all. As you know, diesel injectors are expensive and this can be very costly. With the G2, you can see which injectors are causing the problem and replace only the ones that are bad. With the use of a laptop computer along with the G2 tester, injector spool times are identified quickly. While a laptop is not necessarily needed, it will give some data logging capabilities along with some graph displays on what the injectors are doing.

Going back to the ’03 truck that had come in to the shop, I knew that I had problems in the cylinders 1, 3, 5, and 7. The trouble was all on the passenger side bank. After hooking the vehicle up to the G2 I was able to get an idea of what was going on. The spool times of the injectors looked great. The funny thing was that these injectors spool times looked great compared to others I had seen in the past, but the engine still had a miss on four cylinders.

The next thing was to perform a cylinder kill test which can also be done with the G2. The purpose of the test is to find out how all the cylinders deviate from each other in order to see their contribution to the total engine. The cylinder kill test will obtain a baseline while the engine is running. After the baseline of rpm and torque, the G2 will kill the cylinders 1 through 8 in order for several seconds.

After the test, we found that cylinders 1, 3, 5 and 7 were not contributing anything – in other words, those cylinders were completely dead. So there was one other thing that needed to be looked at. I wanted to see what the HPOP (high pressure oil pump) was doing. From the menu of the G2 you can also select to display and graph the pressures of the HPOP.

After running the vehicle for a few minutes graphing the HPOP data, I could not find anything wrong. The pressure at idle was almost 600 psi and would rise as I accelerated the engine. So it was evident that there was nothing wrong with what could make this engine function.

The only other thing that I could do would be to pull the passenger side valve cover and take a look. Something to keep in mind on a 6.0L is that, if all things are working, there must be a high-pressure oil leak somewhere. Seeing as how all of the cylinders were dead on one side there had to be a leak somewhere.

After removing the valve cover, I cranked the engine once again to see if there were any external signs of leakage. Unfortunately, there was not so the engine had to be torn down further. What I found was the oil branch from the HPOP on the passenger side was leaking. This was causing such a loss of high pressure oil that the injectors could not actuate when they were pulsed by the FICM.

Here is where the G2 became my best friend! While tearing the engine down, I found that someone had already replaced all the injectors on the passenger side. The owner admitted that he had just picked the vehicle up from another shop that could not fix it. With the PCM having codes pertaining to possible injectors, the shop automatically assumed that injectors would fix the problem. This was a terrible for both the owner and the previous shop.

Obviously, the best thing to keep in mind is that there are tools out there related to certain purposes that will do a much better job saving the job – and your reputation – than trial and error. 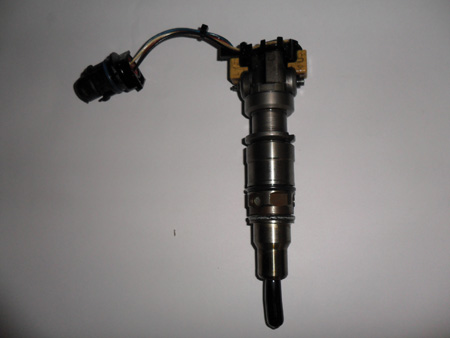 Trial and Error Can