Turns out, many engine builders are experts at building for applications that don’t move as well. And there’s a wide-open market for power system units that either run an electrical generator or power another system such as an irrigation pump through a power take off (PTO) shaft.

While there are a number of large, established players in the market, especially for diesel generators, there are some newer players that have found a niche. SRC Power Systems from Springfield, MO has been tinkering around with diesel generators for over two decades, but it has been in the last year that it decided to take a big turn and head into the natural gas power generation market. We talked to SRC Power Systems General Manager Kevin Snyder and Product Sales Engineer Doug Evans about their newest market venture.

Snyder says that SRC manufactures gensets and power systems for several markets that have load requirements ranging from 20-125 kW. The engines that power these units are typically an automotive or industrial engine base producing from 30-200 hp. SRC’s Doug Evans says that his company’s gensets run mainly on diesel and natural gas (LPG).

The smaller horsepower gas gensets use automotive style blocks, notes Evans. “The 20-120 hp engines with automotive style blocks are either inline-6 or V8s. We have two versions of a spark ignited diesel at 125 and 200 hp, and the base engine is an International Harvester 466 that has been gasified (converted to natural gas).

“We have customers from several different markets who we refer to as OEMs – they can be found in a variety of custom applications, such as serving the oil and gas industry,” says Evans. “Propane and natural gas engines are used to pump the oil and gas out of the ground and send it down the pipeline.”

Snyder and Evans say another up-and-coming market seems to be in agriculture and farming, specifically irrigation power units. They see growth because of the high price of diesel these days along with issues associated with becoming Tier 4 compliant by many of the larger stationary diesel manufacturers.

“The current cost of diesel is a big driving force to alternative fuels,” says Snyder. “Plus, a lot of the diesel guys are getting a little worried about Tier 4 emission regulations that will go into effect this time next year. That’s going to drive diesel prices up 10-35 percent depending on whose engine you use. So a lot of these guys are abandoning the diesel side now.”

The agriculture market is a big one for many engine builders because of the variety and complexity of machinery most farmers use on a daily basis. In Kansas, for example, our experts say farmers run their natural gas units 24/7 about 4 months of the year for about 2,500 hours a year, and they’re running them hard. “They’re pumping a lot of water,” says Evans. “In Western Kansas alone, just with gaseous fuels not diesel, there are more than 13,000 engines in operation. In Nebraska, there are over 55,000 engines being used for irrigation. That’s just two states. My background is more or less in the oil and gas market but I’ve been absolutely amazed by the number of units in the irrigation market. It far exceeds the oil and gas industry.”

According to Evans, most farmers don’t need a diesel engine for their equipment and can actually save money with an alternative fueled unit. “Most farmers irrigate anywhere between 1,500 and 2,500 hours a year. You’re not going to get as much longevity out of a natural gas engine as you would a diesel engine but for the minimal amount of hours that they’re using it, with good maintenance, they’ll still get 10 years out of it. And it’ll be half the cost of a comparable diesel engine to begin with.”

Of course, there are still some irrigation and farming customers who prefer diesel, according to Snyder, mainly because propane may not be readily available. “They may not have a natural gas line near enough to hook into – it might be almost cost prohibitive to trench lines to bring in natural gas in some cases.”

However, in nearly all cases there’s a natural gas supply within a mile or two of where the farmers want it. And often times it doesn’t seem to be tremendously expensive to trench it in. “I talked to one of our customers who said it only cost him about $5,000 to trench about a mile,” says Evans. “When you figure the dramatic fuel savings of gas vs. diesel you’ll pay off that $5,000 pretty quickly.”

There are some applications in the oil patch where a diesel engine is necessary, according to our experts. “If there’s a lot of heavy motor starting, they need the extra torque of a diesel engine,” Evans explains. “There might be a 24/7 year round operation and with 8,000 hours a year running an engine it would make more sense with a diesel because you’ll get 30,000-40,000 hours out of it before you have to rebuild it.”

A natural gas engine only has about half of the longevity of a diesel. There’s always a trade off, say experts. “Most of the time in the oil and gas industry they prefer to use a gas engine because a lot of times your typical pump jack, the donkey that goes up and down pumping oil out of the ground, so whenever you pump oil you get natural gas,” says Evans. “It’s free energy to those guys.”

An automatic standby generator is a back up electrical system that operates whether you are home or away. Within seconds of an outage, it automatically supplies power directly to home or business’ electrical circuit breaker box. After utility power returns, the generator shuts itself off until the next outage. The generator can  be made to operate on natural gas or liquid propane gas and sits outside just like a central air conditioning unit.

Standby power is mainly for homes and businesses, says Evans. “It may be a grocery store where there’s a major power failure, the generator is there to power the refrigerators keep them cold and the air-conditioning going.”

Standby units have become more common in high end homes and among businesses with critical power issues where an emergency back up is needed. “Usually they are wired directly into the buildings using an automatic transfer switch where the utility power runs in one side and the generator power runs in the other side,” says Evans. “So when there’s a power failure it trips a relay and starts the engine, lets it warm up for about 3 minutes, and then it flips another relay that switches from utility to generator power. The generator stays on until the utility power comes back online and then it switches back over.”

“Typically maintenance in number of hours of use is the same for a diesel as it is for natural gas,” explains Evans. “The gas engine will have a little higher maintenance cost than the diesel but not much (spark plugs, etc). Usually most guys don’t question it because the gas engine is less capital cost to buy than a diesel initially. With operational costs per hour, as far as fuel goes, the gas engine burns fewer dollars per hour than a diesel engine. And stretched out over a ten year span they are close to the same maintenance and operational costs – the difference is usually just the initial cost and the gas is far less expensive.”

The standby market is really all encompassing, says Snyder. “It can include everything from ski lifts, to farming, chicken farms and places that need critical backup. Because if these places lose utility power then they can start losing their livelihood.”

Natural gas gensets have been around a while but there aren’t that many players in the market, says Snyder. “The guys who are in it have been in it (natural gas) for a while and they’re big. I’m calling us the small giant.”

Snyder says that SRC has been involved with the diesel genset market over the last 25 years and last year they decided that this was going to be part of their strategy and business growth plan to go into natural gas power units.” We’ve taken off with it and we’re learning a lot of things. We brought Doug on here to help us, and he’s been in this market for a long time. We thought the oil and gas industry was the only place to be, but now we’re seeing the irrigation market is huge, and the standby market is big as well. It’s just getting your foot in the door somewhere.”

Snyder says that from this time last year to this year they have seen a 620 percent increase in their natural gas unit sales. However, he notes that they just started in this market last year. “Our sales have been tremendous – we’re probably one of the smaller guys in the market but we’re planning on growing.”

Snyder anticipates much of that growth coming on the export side. “We feel we can do even better in the export market,” says Snyder. “Places like China and India are building new cities every day and we feel that if we can get in the door there, we could start shipping standby generators and be competitive using the automotive industrial natural gas engine to break into this market.” Of course, Snyder recognizes that growth expectations probably need to be tempered with the learning curve of a new international market.

SRC also has big plans to get into the housing market with its standby, says Snyder. “That’s where we want to focus now. We’re not like those big companies with their big standby generators – we’re a $20 million company right now but compared to some others we’re small. Right now we don’t feel like we want to get into the liability of providing power at a place that is power critical such as a chicken farm. If the power goes down and they lose all back up power, and the generator doesn’t pop up, they could lose 10,000 chickens. However, I’d say in the next five years we’ll be ready to go into those places, too.”

Diesel gensets still make up a larger part of the overall genset market, but it makes a lot of sense to build natural gas units out of automotive blocks for many stationary and power generator markets. Tier 4 emission regulations will probably have some effect on the market for diesel engines, but there is still a market for them, especially for the larger entities with big power demands and the longevity of a diesel. But the lower initial costs and operating costs of a gas unit will be an appealing option for many. 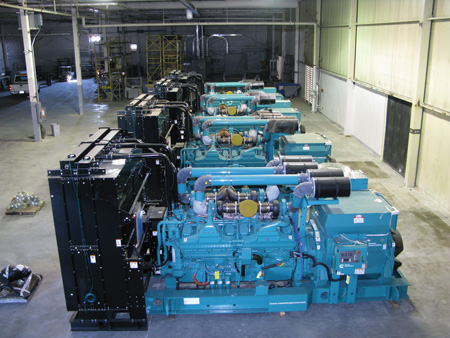