According to the American Waterways Operators (AWO) association, there are about 4,000 tug boats in operation nationally on inland and coastal waterways. Thanks to increased environmental awareness, many of those tugs are working harder than ever.

Likewise, the engine rebuilders servicing this market segment are working hard as well. According to Mike Haight of Ironman Renewal in Santa Fe Springs, CA, this challenging market isn’t for the weak.

“We don’t service the huge freighters or tankers – we serve the smaller end of the marine world, from 3.9L up to 27L engines,” says Haight. “Strictly diesel, and in many respects, the projects are very similar to that found in a traditional diesel engine operation. On many of the tugboats and shore boats it’s likely that you’ll find, in addition to twin screws or drive motors,  upwards of three gensets that power their electronics, onboard lights and hydraulic systems.”

Because Ironman handles truck, bus and genset projects as well as marine, Haight’s comparison is apt. “Well, it’s the same type of situation as you might face in a traditional engine building shop, except that instead of working in the relative comfort of the shop, you’re standing on unsure footing, floating in the water,” he says. “And if you have to go out on sea trials to see how the engine is operating you’re out there on the water, bouncing along on the waves trying to see how things are going.”

One of the first differences a marine engine rebuilder must contend with is simple logistics: how do you get into the engine compartment to have it repaired? It’s completely different from an engine that rolls on the road or a generator, Haight says. Unlike their marine counterparts, road-going diesels have the “luxury,” if needed, of a complete engine overhaul.

“Accessibility to these engines is quite difficult – you have to climb down into the engine room to even get to the engines in the first place. The boats are sealed up with watertight hatches – unfortunately, it’s not a case of saying ‘Oh yeah, the engine’s down? We’ll just yank it out of there!’ Well, these guys most likely have to break out the torches and cut holes in their decks if the engine needs to be removed – and that’s not likely to happen.”

With a diesel engine, the first typical repair is an in-frame overhaul.

“With a truck or a bus, for example, we’ll leave the block mounted in the engine compartment, take off the heads and remove any bolt-on components that might restrict access to the engine. We’ll drop the pan, disconnect the rods and push everything out the top,” Haight explains. “Then, we’ll put in new cylinder liners, install pistons with rings, add new rod and crank bearings, then redo the cylinder head and of the external components like turbos and water pumps. At least for the first one, we won’t remove the block from the vehicle. It cuts the repair time in half, and gives the truck or bus owner another 400,000-500,000 miles, at which point we’ll check it again.”

This is the same procedure, Haight says, a marine rebuilder will follow – the challenge is in proximity. “Boat owners don’t want to cut their decks to pull the engines out, so they have to go in and do the work in the engine compartment. They’re carrying these exceptionally large cylinder heads up and down the gangways and you have to get them in pretty tight quarters,” he says.

“In the shop, you have your overhead cranes and everything’s accessible – on the ship you’re in an engine room. Cylinder heads, turbos and other diesel components may weigh a couple hundred pounds and for a guy to be in there manhandling them, it’s just not simple,” Haight says. “These guys have to rig up comealongs and winching techniques to be able to move these heavy parts.”

Haight says while there may be I-beams in some engine rooms (and in fact, some of the larger boats will actually have cranes set in place to lift and maneuver engine parts) marine diesel service typically involves sheer muscle to get parts up and out the hatches to be able to get them to the shop to be serviced.

“It can require careful orchestration to do this kind of work,” Haight says. “You’ll know when you meet a diesel engine mechanic – just give him a handshake. They’ve got strong forearms.”

Levity aside, Haight says marine engine mechanics face similar struggles as some professional athletes: “They’ll suffer from knee injuries and lower back injuries. They are working with a lot of weight and they’ve often got to carry it around. It can wreak havoc on the body. They don’t last very long in that type of environment.”

When asked why boats aren’t designed to allow easy access, Haight laughed. “Now you’re suggesting that the design engineers are collaborating with the people who need to do the maintenance. You know better than that. It’s the standard discussion we have all the time: ‘Why did they do it this way!?”

Granted, some vessels do have accessible hatches so it’s easier to pull the engines out. “We’ve seen that with the city of Long Beach,” Haight says.  Some of their smaller shore patrol vessels, say a 32- to 35-foot twin-engine diesel are hatch accessible and they have a little dry dock with winch capability to pull them out and send them in for overhaul and repair.”

Once engine work has been accomplished, Haight explains the challenges of putting the marine diesel back in operation. “On one of these diesels, it’s critical to get the engine to temperatures at a quick pace and get them broken in as quickly as possible. Many times, they have difficulty getting the rings to seat – and if they don’t seat they’ll consume oil like crazy and just won’t operate like they’re supposed to. The longer it operates without being broken in, the greater chance you’ll have of it glazing the cylinder liners. The surface of the rings and the surface of the cylinder won’t create a seal and you’ll consume large quantities of oil, getting right back into the emissions problem – you haven’t resolved anything.”

Haight says failure to seat can cause heavy blowby, positive crankcase pressure which potentially can push oil out your breather tubes and create all sorts of other problems. “The best way to break in an engine is always the dyno. On an overhaul this works great. You’re able to bring it up to temperature and put it under load – but then even after the dyno you still need to run it under load on the ship,” he says. “When you’ve done an in-frame, you don’t have the luxury of having the preliminary seating on the dyno. You just have to put to sea and put it into gear and get the props running.”

Haight says techniques vary from the mild to the wild. “I’ve seen them try to keep a boat roped in place in its own dock space, put it into gear and just drive those props to try to break it in.  But the best way is to just take it out into the open water, put it into gear and just run it hard. It’s very tough on a marine application – they need to get the engines heated up as quickly as possible so the piston rings will seat.

Large freighters that come into many of the ports in California, particularly the ports of Long Beach and Los Angeles, are held to very strict emissions standards, Haight explains. To help that, they’re stopping the big container ships well off-shore and tugging them in. Once they’re put into port, they’re plugged into shore power. These tug boats are working harder than ever, and some of the largest tug boat builders are working on making them more emissions friendly as well.

“Foss Maritime, for example, is working on developing tugboats designed specifically to meet emissions standards,” says Haight. “They’re experimenting with engines equipped with diesel particulate filters to reduce emissions footprints – they actually have one out there now operating.”

The scare that many marine operators have, Haight says, is the worry that if they’re out at sea and run into an adverse engine condition, the diesel particulate filter might just shut the engine down. If they just had mufflers that would allow the exhaust to run, or could easily bypass the DPF, it wouldn’t shut the engines down, they could continue on back to some port.

Waterway transportation is considered one of the most environmentally safe forms of commercial transportation, according to the AWO. Haight says his company takes its responsibility to help maintain that reputation seriously. 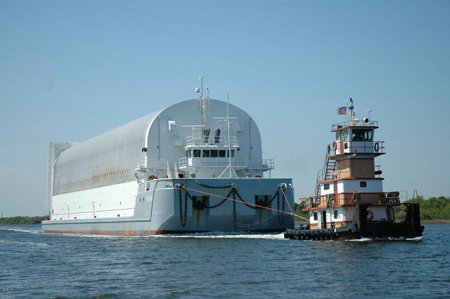 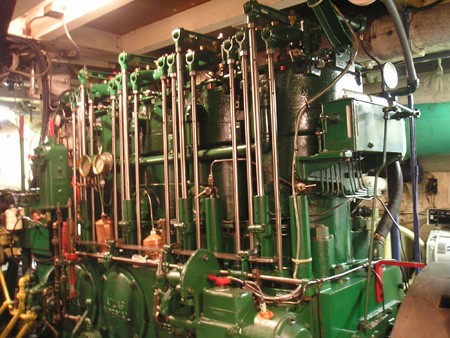