Ginsu knives became a household name by blasting infomercials showing how their superior steel blades could cut through a shoe and then slice a tomato paper-thin. The blades would bend and flex and never lose their sharpness. Millions of homeowners bought the knives; however, you would be hard-pressed to find an executive chef who used them. They just weren’t right for that application.

In a stock engine, the exhaust valve can last up to 150,000 miles or more. However, in a racing situation, depending on whether or not the engine has been over-revved, the valves may last only a few races or a full season. In a NASCAR engine where teams are running titanium valves, they might be replaced every race. In Pro Stock or Top Fuel drag racing cars, valves might be replaced every half a dozen runs. A street/strip engine may last more than a season; it all depends on the conditions under which they operate.

One supplier of valve train components says that, with the exception of their Inconel big block Chevy marine and supercharged valves, the company’s performance valves are typically made with 21-4N stainless material. “Most of us use stainless steel knives, forks and spoons, but the material probably wouldn’t be appropriate for valves. It depends on the grade of stainless. There are many grades of stainless steel, and just having a valve made of stainless doesn’t mean a lot,” says the spokesman. “The 21-4N material is generally accepted as a good material for use in most performance applications.”

Engine builder and author David Vizard, says that most performance valves today are made from some type of stainless steel unless you get into seriously high dollar racing where titanium or Inconel are preferred for their lightweight and durability.

“Most performance valves are all made of high temperature alloys,” says Vizard. “Typically, they are made of some grade of 21-4N. But there are so many minor variations on that, I’m sure there’s at least a half a dozen different alloy variations of this metal. The manufacturer may find that they can do something a little less expensive or make the valve last a little longer by putting a hardening agent in it or some other treatment. The intake valves are all basically made from one type of material and exhaust valves are made from another. But some manufacturers will make all the valves from a 21-4N derivative regardless of which valve it is. The reason is because they end up buying in more bulk and therefore it’s a better discount than if they bought half of one and half of another type of material.”

When should you upgrade valve materials? Another leading valve supplier says, “An engine builder should look at other materials when you are going to get very aggressive with the cam profile and/or rpm band of the engine. From a seat and guide standpoint, look for something that will withstand the higher rpms and loading of the guide from side load from a high lift cam and seats for the combination of rpm and spring pressure. Titanium or hollow-stem valves are always a consideration when trying to lighten up the valve train.”

Many titanium valves are custom machined rather than produced to stock dimensions for specific heads: the head diameter, stem length and diameter, and tip are all machined to whatever specifications you choose. This allows you to get exactly what you want, and eliminates the need for suppliers to produce and stock inventory for applications that may not be popular items.

With the proliferation of aftermarket cylinder heads that require unique valve sizes, it has become difficult for some suppliers to keep up in recent years. Most of the street performance heads use the same sized valves as OEM heads, but many racing heads do not. The head may require a valve that is slightly longer than a standard valve, or one with a different head or stem diameter. As a result, valve suppliers now have to carry a greater variety of valve head and stem diameters, and lengths, or custom make the valves as needed. Some valve suppliers say they can turn around a custom order in a week thanks to CNC tooling that allows blanks to be easily machined to specifications.

Sodium-filled hollow stem valves are available for higher heat applications, and are typically used for the exhaust valves. The sodium inside the valve stem melts and absorbs heat from the valve heat. As the valve opens and closes, the sodium sloshes up and down inside the valve to transfer heat from the valve head to the stem. This helps the head run cooler to reduce the risk of valve burning, preignition and detonation. The difference in cooling is significant. With a conventional solid stem exhaust valve, 75 percent of the cooling takes place across the valve seat and 25 percent through the stem. In a sodium-filled exhaust valve, 40 percent of the cooling is through the stem so the valve can tolerate more heat.

One way valve suppliers are taking additional weight out of intake (and exhaust) valves today is offering “hollow stem” valves. The valve stem is gun-drilled and micropolished to make it hollow like a pushrod. The drilling is only done in the upper 2/3 of the stem where rigidity is less of a factor than the area just above the valve head. After the stem has been drilled out, a hardened tip is welded onto the top of the stem. The result is a valve that is 20 to 22 percent lighter than a valve with a solid stem.

According to one supplier of hollow stem performance valves, the valves are good for 300 to 350 more rpm with no other modifications (same springs, rockers, pushrods, etc.).

A couple of suppliers we spoke to said that coatings are being used in more and more applications these days. When it comes to valves, a number of coatings may be employed, including special coatings for titanium valves.

One supplier says it uses a metal treatment, rather than a coating for its premium valves. “Our valves go through a five step liquid nitriding process which introduces nitrogen into the surface of the valve, resulting in a thin, high hardness case which is both wear- and corrosion-resistant. The valve’s dimensions are not changed by the treatment. The lower coefficient of friction from this coating leads to better sliding, less risk of scuffing at the guides and improved durability against wear on both the guide and the stem.”

In stock automotive engines, powdered metal (PM) guides are widely used as well as cast iron. Diesel engines often use coatings such as phosphate and other heat treatments with a proprietary cast iron material to combat the wear in newer, low sulfur diesel applications. Bronze valve guides are still widely used in European and racing applications.

Vizard points out a few interesting observations he has made over the years. He believes worn valve guides cost more horsepower on the dyno than you might think. “In a 140 hp Pinto test engine I went from .002? to .004? to .006? just on the intake valve the engine dropped 4 horsepower from .002? to .004?. So we lost 1 horsepower per cylinder, and from .004? to .006? we lost another 9 horsepower. I’m not saying that’s going to be the case for every single engine out there. But the reason we used a Pinto engine for this test was because it responds very similarly to the small block Chevy.”

Additionally, he says that 40 percent of the heat is conducted out through the valve guide. “If the clearance goes up by much, the conductivity from the stem to the guide literally plummets – drops like a rock – transferring it all to the guide.  And that’s why it’s better to use bronze guides because they conduct heat away more effectively from the water jacket even if it goes through cast iron first,” he says. “Since the surface area of the guide is about 4 times that of the valve stem, conducting heat into 4 times the area of cast iron, will cut that temperature dramatically.”

Valve seats draw heat away from the valves and conduct it into the cylinder head, providing the vast majority of the cooling that the valves receive. Anything that interferes with the seat’s ability to cool the valves (such as a loose fit or deposits between the seat and its counterbore) can lead to premature valve failure and expensive comebacks.

Average combustion temperatures in a street performance engine are usually around 1,400 to 1,700 degrees F.  Nickel alloy cast seats can usually handle 1,400 degrees F with no problem, while cobalt is good for up to 1,650 degrees to 1,700 degrees F.  When engine builders or drivers introduce nitrous oxide into the engine, temperatures can soar well above that, which can make some seats become hard and brittle. This increases the risk of seat cracking and failure. So the seat you choose has to have high temperature resistance if an engine is boosted with nitrous oxide.

Race engine builders often use Beryllium-copper alloy seats with titanium valves because titanium runs hotter than a performance stainless steel valve, so they need seats that can remove heat from the valve fast.

Beryllium-copper have a thermal conductivity rating that can range from 60 to 140 BTUs (British Thermal Units) per foot per hour depending on the alloy. That’s quite significantly better cooling performance than most cast iron seats.

The only disadvantages of using Beryllium-copper seats is that they are expensive, and produce a dangerous dust when machined that can cause lung problems if inhaled. Using a coolant while machining the seats should keep your exposure to a minimum, but you should also wear a dust mask for extra protection.

Various proprietary beryllium-free copper-nickel alloy cast seats have been developed in the last few years that cool as well as or even better than Beryllium-copper seats for racing applications that demand high heat transfer rates between the valve and cylinder head. Copper-nickel alloy seats have proven to be popular with NASCAR racing teams because of the superior cooling performance and wear characteristics these alloys deliver.

Special thanks to Don Weber of Engine Pro and Kevin Feeney of Racing Head Service for their contributions to this article. 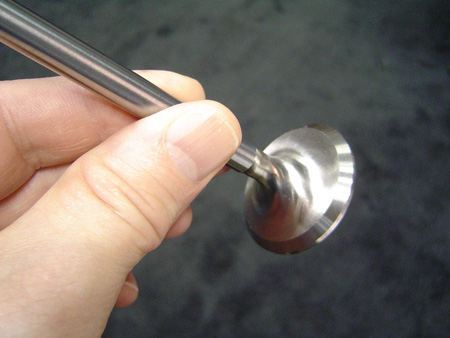