Diesel fuel combustion (or incomplete combustion) is accompanied by the production of soot (unburned carbon). Prior to exhaust emissions legislation this soot was allowed to pass into the atmosphere through the exhaust system. With the advent of emissions legislation, engine OEMs were required to find methods to either, 1) reduce the amount of soot formed or 2) contain as much soot as possible in the engine’s crankcase to be removed later with each oil change.

Engine OEMs and oil additive manufacturers then developed diesel engine oils that could suspend a greater amount of soot (as much as 10% volume) in the engine oil rather than depositing it on engine components where it could cause premature engine failures. This was primarily accomplished by adding more detergents to the oil to better neutralize acidic byproducts of combustion and more dispersants to suspend soot particles in the oil. Current diesel engine oils contain about twice as much detergent and dispersant as gasoline engine oils.

From the advent of American Petroleum Institute (API) CD oils in the ’60s to API CI-4 Plus oils in the early 2000s, detergent and dispersant levels have increased significantly to improve diesel oil performance and lengthen oil change intervals.

New environmental laws set in 2007 have forced emissions levels so low that catalytic converters and particulate traps are necessary to pass exhaust emissions tests. Engine builders, additive manufacturers and oil marketers got together to develop API CJ-4 oils for these engines. CJ-4 oils have reduced ZDDP levels to minimize phosphorus “poisoning” of catalytic converters and particulate traps. Exhaust sulfate emissions (remember, sulfates plus water equal sulfuric acid) were also reduced by placing a limit on the detergent content of the oils.

These new API CJ-4 plus oils offer improvements in all areas of diesel engine oil performance except one. If soot loading isn’t excessive, diesel engine oil change intervals are effectively determined by the detergent content of the oil. Detergents neutralize acidic byproducts of combustion, and when the detergent is depleted, acids build up in the engine oil and increase engine wear rates (In modern diesels corrosive wear is more prevalent than abrasive wear). Fleet operators learned long ago to utilize used oil analysis to determine when the oil’s detergency is depleted. At that point the engine oil should be changed.

Don’t misunderstand me, API CJ-4 oils offer outstanding performance. They just can’t be run as long in your diesel engine as most API CI-4 Plus oils. Remember – diesels love detergents.

So, what do you use if you have a high performance diesel engine? Do you need better oils? The short answer is probably not, but let me explain why I say this.

The use of friction modifiers in diesel engine oils could provide some benefit (most current diesel engine oils don’t use friction modifiers), but the consensus is that thinner diesel oils will be the most commonly utilized solution. Remember, thinner oils require less power to pump. The Engine Manufacturer’s Association (EMA) has requested that the new diesel engine oil category provide a scuffing wear test and improved high temperature shear tests to protect vital engine components from increased wear caused by the use of excessively low viscosity oils. The EMA has also asked for improved compatibility with biodiesel fuel blends. The EMA is requesting prototype oils for testing prior to January 2016 to aid them with their 2017 model year engine development efforts.

Oil pressure is primarily determined by the sum of the internal oil leaks in your engine. Your oil pump puts out a given amount of pressure and flow (volume), and then each component (particularly bottom-end bearings) allows a little bit of flow and pressure loss as the oil is pumped through the part. Rod side clearance (or cheek clearance) and piston undercrown oilers (P tubes) can bleed off significant oil pressure.

Most engines have oil pressure gauges in locations convenient to the instrument designer engineers. I once lost the bottom end in a big-block Chevy because I was experimenting with very thin oils, and I hadn’t thought about where I was measuring oil pressure (at the oil filter boss). When I disassembled the bottom end, the main rod bearings at the rear of the crank looked fine. But as I inspected the front of the crank, the bearings looked progressively worse. Guess which bearing failed? The #1 rod bearing. I learned my lesson and relocated the oil pressure sensor to the front of the engine. Be careful when experimenting with less viscous engine oils and/or low volume oil pumps.

Also monitor oil pressure carefully when utilizing low viscosity engine oils and biodiesel-containing fuels. Biodiesel fuels are usually not as volatile as diesel fuel, so biodiesel doesn’t evaporate out of the crankcase as rapidly as diesel fuel. Many engines utilizing higher concentrations of biodiesel have higher than typical levels of fuel dilution in the oil. Since biodiesel is also thinner (less viscous) than diesel oil, excessive concentrations in the oil can also lead to excessive component wear if the oil is very thin.

When you stop and think about it, diesel oils are some amazing products with the highest additive content of all engine oils. In fact, I use diesel engine oils in my motorcycles and stock passenger cars. I only use hot rod or racing oils in my modified engines. If you want to learn more about Diesel Engine Oils, don’t forget the Lubrizol Corporation’s excellent website (www.hddeo.com) for useful information on current diesel engine oils and future trends. 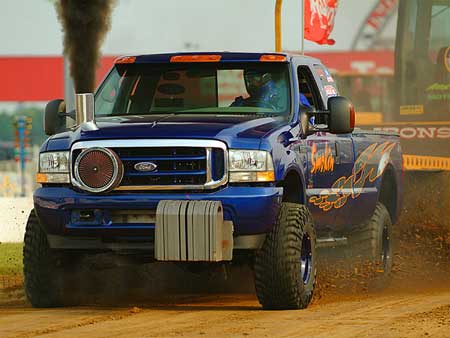 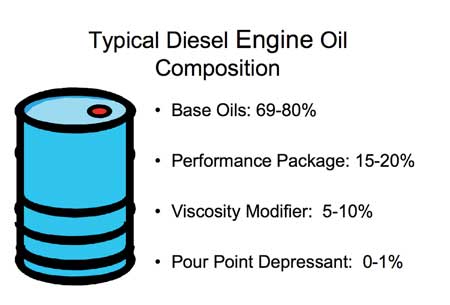