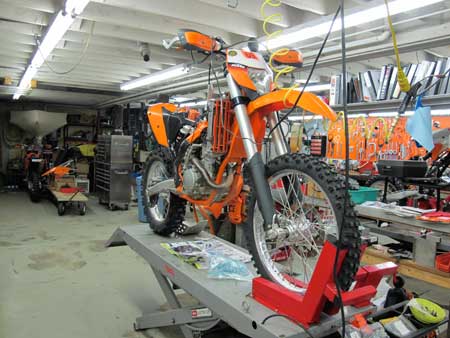 While consumers often distinguish the powersports market by its individual products, it is all under the same umbrella for manufacturers and dealers of this equipment.

Engine builders doing work in this market will find that they can often make more working on less. The engines are small, but depending on the machine, the parts may not have a small price tag. We talked to some experts in the market and found out what challenges they face.

Holeshot Engineering’s Denny Laidig does a little of everything as an Orange Certified Technician, which is KTM’s master technician level. “In 2002 KTM introduced the LC8, which is their V-Twin, and in order to qualify to service them they had a number of requirements that we had to agree to, including a three day service class. I had no problem with that – I’m a firm believe that if you can’t fix it, you’re not worth anything as a dealer.”

Laidig, who has been a KTM dealer since 1976, says he goes back to re-certify every year. “I really only have to go back every three years to re-certify but my thought is if I can’t get a new idea then I’m not coming back. They laugh at me, and ask if I want to teach this class. No thanks – I’ll just go up there and try to find the two smartest guys in class and hang with them.”

Laidig says that he does engine work for customers wanting restorations as well as for KTM factory recalls. In 2000 KTM introduced its evolution engine, which became a game changer in motocross. “They were cutting-edge four-stroke engines with hydraulic clutch and so on,” Laidig explained. “That motor lasted until 2008. They did some little refinements, but all the gaskets from 2000-’08 fit that engine. They did cam changes and rod lengths for specific models, but everything else was the same.”

KTM’s four-stroke dirt bike engine (evolution) used one quart of oil to lubricate everything. “We had no problems with wear or anything else,” says Laidig. “But it was a big idea, if you started to have problems in the transmission the damage could carry over to your engine. Honda had separate reservoirs for its engine and transmission. But KTM used two oil filters and two pre-screens that kept everything separated in its own compartments, and it really worked.

Laidig says that all of KTM’s engines have traditionally been sand cast, but this year they went to investment casting, which is a new material. The alloy that KTM is using is actually flexible to a certain extent so if it is hit, it will deflect and go back into shape.

Bruce Blake says his company, which specializes in powersports, is actually three separate divisions. “We have Michigan Engineering, Inc., MEI Machine, and then I have MX Farms. MX Farms is kind of unique: it’s a race shop that I moved out to a rural area about six miles outside of the city,” he says.

“We have 120 acres of land and a test track for motocross and a half-mile dirt track oval for motorcycles as well,” Blake notes. “The MEI machine program does all of the motocross, supercross, road racing and dirt track engines. At the same time we build engines for sidecar racers and mini-sprints. I build a lot of 600, 750 and 1,000cc engines. In certain areas of the country I build Yamaha XS650 engines for Legends cars.”

According to Blake, his two-stroke work has dropped off about 75 percent in the last 5 years. “It’s a political thing in motocross, because I have some regional pros who will race their 250cc two-strokes on the off weekends and literally they lap the field with them,” Blake explains.

Blake says that there’s a good profit margin on four-stroke engines because they are more complicated to work on. “A lot of guys don’t understand that these engines are the equivalent of the 250cc two-stroke for durability: after 40 hours, there’s nothing left of them. They’ll get 8-12 hours of use out of a piston and ring set. And if they’re really good, and had some good coating work, they won’t need a ring set. But those things on the top that are made of titanium and stainless steel can cost up to $800 a set because the valves look like tulips after 20 or 30 hours of use.”

Motocross is where most of MEI’s work is coming from today, including “Enduro” and “Hair Scramble,” says Blake. “The dollars are less than road racing but there’s more activity,” he says. “There are a lot of small modifications to the engine being made in these applications. With two stroke it’s porting and bore sizing; in the four strokes it’s piston design, custom-made pistons, larger bores, different valves (oversize) and cam applications (cam timing).”

Blake says that four-stroke engines require a lot more work and dyno time than two strokes. “Let’s say we had X on two-stroke dyno work: then four-stroke dirtbikes will be at 10X on dyno time. There’s a huge difference because of all the custom work and run-in time.”

“They can drag race anyone, but motocross is won in the corners. You have guys running a 625 cc Honda 450, jokes Blake. These guys may make as much as 10 lbs.ft. of torque beyond the legal competitors. They go down the straight like a flash but the corners are tough.”

The biggest engine development applications right now are in the four-stroke motocross engines. And four-strokes fuel suspension refinements as well. “Most people need to spend as much or more on their suspensions because, for the most part, the engines today are beyond the skill level of the average rider to be able to be able to push the limits,” Blake says.

Reuben Frankenfield of 35 Motorsports says that he works on 90 percent sportbikes at the moment. “Yamaha R6 is my most popular bike engine. Most of the builds I’m doing are Super Sport builds. The difference between Super Sport and Super Bike is that SS uses all the stock engine components – cams, pistons, rods, cranks – all the engine components stay stock, I’m just specing them, increasing the compression and blueprinting.”

Frankenfield says that he prefers building road race engines rather than street performance like some other shops. “A lot of those guys just want the latest 1360 kit for their Hyabusa. I stay away from that stuff because I’m not a drag racing guy – I’m a road-racing guy. I get an engine out of the box that makes 105 hp and I shoot for 120-125 at the rear wheel. It’s mainly due to the Super Sport class rules.”

Frankenfield says those rules dictate that you can’t do any port work but can do seat work without getting into the port. “You are just getting the most out of all the stock components. It makes all the difference in a racing application. There’s tons of room for improvement from stock. And really, in inline-four smaller displacement motorcycle engines, compression is where you get all the power.”

According to Frankenfield, some guys are building Super Sport engines where the pistons are actually touching the heads on the swing by. This beats up parts, so he doesn’t go to that extreme for his customers. “The guys who run them that tight are getting parts budgets and boxes of parts from manufacturers. My guys pay for their own parts. I build them to go the whole season.”

Frankenfield says he expects his engines to last for the season or 2,500 race miles. “They will last for 4,000 miles but then you’re just riding a tired engine. It’s very much a budget conscious setup. It will last as long as a typical stock engine, it’s just going to put out more power the whole time.”

The Snowball Effect and The Monster Engine Build

Butler says he was going to simply rebuild the engine on his own time frame, but the bike suffered an oil pump failure on the dyno, which left a massive crack in the stock forged piston. The cylinder wall was scored severely. “The only logical solution at that point was to go big,” says Butler.

Stan Lippert, NODT’s master tech, is a National AMA Vintage Champion on his 49 hp Honda CB350 that he built and tuned at Northern Ohio Ducati and Triumph, so his expertise prepared the shop for the task at hand.

The 1080 high-compression, big bore pistons and rings were ordered from Ferracci. These are a Wiseco-made product with a minor tweak from his plan. Both cylinders were removed and sent to Millennium Technologies for honing and nickel/silicon carbide plating.

“At this point, I felt these choices were all made out of necessity, but since we were taking the cylinders and heads off, I decided to jog my memory for any ideas I had tinkered with and put on a back burner due to cost. The phrase: ‘Since we’re in there anyway’ became a frequent part of my vocabulary,” Butler jokes.

A few days later, Ducati Performance camshafts were ordered. The decision was made to send the cylinders to Ace Powder Coating for a high temp ceramic black coating to keep with his retro cafe racer style build. “The DS1000 motor is known to run warm and often melts the stock powder coating. While it doesn’t cause any harm, it’s just plain ugly,” says Butler.

After that the experts at NODT decided to have the crank polished and knife edged. When it came time to look at rods, Butler says he had to draw the line somewhere. “This is a modern take on cafe racer. It won’t ever see a racetrack, so we actually decided that lightened or titanium rods wouldn’t be enough of a benefit to rationalize the increased cost to the build. It is a street bike after all.”

Once the Monster is back together, Butler says he is going to rely on the Tuneboy mapping system that will allow him to write a full custom fuel map. “In general, our dyno will show a stock Ducati with the DS1000 power plant at 83-85 hp at the wheel. In that respect, we’d like to see this bike produce about 100-103 based on our expectations of the modifications done.”

While this is NODT’s first big-bore build on a Monster, they have built many full race motors for racers and street riders who want more power from their motorcycles. Butler says NODT has also built several vintage ‘Brit’ bikes from Triumph to BSA and Norton.