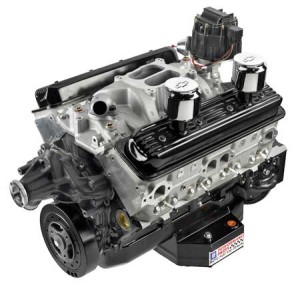 GM Performance Parts offers a basic crate engine package for IMCA racing and other circle track racing classes, however, it is pretty basic and engine builders should be able to improve upon the performance of this standard small block. Some classes require this engine to be sealed.

We will point out any differences in rules for the other organizations as we go along. As always, it is a good idea to check with your local track regarding rules in ANY of the divisions you are building engines for.

IMCA is the oldest active automobile sanctioning organization in the U.S., which started in 1915 through the vision of J. Alex Sloan. The automobile was a fairly new invention but Sloan had the vision to see a future in racing them. That vision continued into 1979 when Keith Knaack, who owned the series at that time, introduced the modified division.

IMCA modifieds are the largest single class of race cars in the country. One reason for this is because it is an affordable racing division to get into due to its unique rules. Of course, the “claiming” rule is one of the rules that IMCA is most known for.

Another unique aspect of IMCA is that any racer can compete for the national championship by gathering points at his or her home track without the need to travel all over the country. Rick Stout did this in 1995, racing out of the Crystal Speedway in Crystal, MI, one of two IMCA sanctioned tracks in Michigan. IMCA modified racers can also compete for a regional or state championship.

While there has always been a lot of talk about making racing more affordable, IMCA has been the most successful at doing just that, and their engine claim rule is most likely one the biggest reasons.

As an engine builder and partner with Bill Davis, Sr. in Iowa, Axel Andreasen saw both sides; they had 100 engines claimed in 6 years in IMCA Modified competition. In that 6-year period, they seldom raced less than 60 nights each season and found the winner circle nearly 50% of the time. They won 2 IMCA National Championships during that period. During their best season, they won 31 races and had 19 engines claimed.

According to Andreasen, in 1989 they probable averaged about $750 – $800 building each engine. The claim rule rule in 1989 was $325 and was increased to $525 during the mid-2000s. Sadly, Andreasen passed away recently.  He was the Engine Shop Manager at JR Motorsports for many years.

The claim amount today has been increased to $1,050. Refer to IMCA’s website at www.imca.com for additional claim eligibility requirements. Rule “25” engine claiming rules are as follows:

A) $1,050 cash, or $100 and exchange, claim on engine, flywheel and balancing plates ($25 goes to wrecker and $25 to official for each engine). Claimed driver has the option of accepting cash, or exchanging engines with claiming driver.

Of course, it is unlikely that you will be able to build a competitive engine for $1,050, but the intent of the rule was not to build engines for that amount, just to build an engine for as low cost as possible. Currently, IMCA Legal Crate Engine starting at about $3,300 and go up from there. We’ve seen them for as much as $7100.

IMCA’s engine rules are relatively simple; again this is from the IMCA Modified Rulebook, Rule 24:

All engines must be able to be used in conventional passenger car without alterations. Engine mounts cannot be removed or altered. Castings and fittings must not be changed. No machine work on outside of engine (no lightweight engine blocks). All belt driven accessories must be on front of engine. ‘Wet’ sump oiling system only. External oil pumps go with engine if claimed.

The following Engine Rules are taken directly from the UMP Modified Rulebook:

A) Any American made engine will be permitted as long as the rear of the engine bell housing flange is mounted at least 72 inches forward from the center of the rear axle. The engine offset must remain within two 2 inches of the center line from the cross member. The minimum engine height when measured from the ground to the center of the crankshaft is 11 inches.

B) All engines used in competition must be able to be used in a conventional passenger car without alteration. Alteration of motor mounts will not be permitted.

C) Aluminum blocks will not be permitted.

D) Magnetos will not be permitted.

E) Wet sump oiling systems must be operative and will go with a claim by DIRTcar officials. Overall dry sump systems will not be permitted.

H) The exhaust system(s) must be mounted with the exhaust directed away from the vehicle and/or away from the ground (preferably horizontal and outside the body of the car). A maximum of 1/2? inch clearance surrounding the header pipe when directed through the firewall on the driver’s side. Local track rules will prevail when decibel and/or muffler rules.

I) One two or four barrel carburetor is required.

J) The engine must be a normally aspirated configuration.

K) Fuel injection systems or electric fuel pumps will not be permitted.

L) There may be specific engine rules issued for each region of North America that deviate from the standard UMP Modified Engine rules.

As you can see, there is nothing exotic here. Virtually any Engine Shop has the capabilities of building a good, competitive modified engine. It may take some R&D, but it is well within the capabilities of any shop. Your Engine Parts supplier can also be a big help. For instance, Engine Quest is a sponsor of IMCA Racing at many Midwestern Tracks, including the aforementioned Crystal Speedway in Michigan.

The UMP also has a claiming rule similar to the IMCA; again, taken directly from the UMP Modified Rulebook, Rule 15.1.1:

A.) Any qualified UMP Modified competitor has the right to claim any engine at any time during an UMP Modified event. To begin the claim a $550.00 fee, plus the agreement to an engine exchange in addition to $50.00 for the tow truck operator.

B.) Any competitor who processes a claim must have taken the checkered flag in the feature race and have finished the feature race on the ‘lead lap’. The claim must be presented in cash or certified check to promoter or designated DIRTcar official within five (5) minutes after the completion of the feature race. The driver must have the claim payment and his/her DIRTcar current/valid membership and claim card available. A third party cannot provide these items to the claiming driver (Yearly membership runs from January 1 through December 31).

All claims, positive or negative, must be reported immediately to DIRTcar headquarters by the event promoter and/or chief steward of the event. Drivers will only have the ability to make two (2) claims in any UMP Modified season.

A driver can claim another driver’s engine only once during the year. Only the engine of the event winner can be claimed. In case of multiple claims on the same engine, the engine will go to a qualified driver who finished the furthest back in the field on the lead lap. Drivers may not claim an engine if he/she has spun out and caused a caution period. If a claim is refused, the claim is not held against the claiming driver. The claim rule is intended to maintain cost effectiveness and a level playing field in the UMP Modified division.

C.) Any driver making a claim must drive his/her car immediately after the finish of the feature, under its own power, directly to the claiming area. Only drivers and officials will be permitted in the claim area. The claim area must be designated by the promoter to all drivers at the driver’s meeting prior to the feature event.

D.) The claimed engine must be completely removed within one (1) hour from the time the claim is made.

E.) The first sell/no sell or trade of the engine by the driver being claimed is considered binding.

F.) Only a qualified driver may claim an engine and only the winning driver may agree to sell.

G.) Any refusal to sell forfeits all cash, trophies and contingency winnings for the feature as well as all DIRTcar State and Nationals points’ award for that night. Any driver refusing to sell his/her engine the first time is fined $200 and is suspended for the next racing event at their home track and one (1) week from all DIRTcar sanctioned race tracks. The second infraction for a driver refusing to sell their engine is a $600  fine and a suspension from all DIRTcar sanctioned tracks for 30-days.

H.) All claimed engines must be removed from the car at the track. The buyer must examine the engine before removal. Once removal has started, the sale is final.

Any sabotage to claim an engine will result in the saboteur being suspended from all DIRTcar races for 30-days and until the fine of $1,000.00 is paid to DIRTcar.

It is extremely important that you study all the rules to be sure you build well within them for whatever sanction you are building for. There are many other Modified classes out there; some individual tracks may have their own class, while there are other sanctions out there that also have a modified class. The rules may or may not be similar to the IMCA or UMP.

So what are the tricks to building a high-powered IMCA or UMP Modified engine? You tell me … you are basically working with a stock OEM motor for the most part. You are limited as to aftermarket parts and of course, you are limited by the claiming rules; you sure don’t want to spend $10,000 to build a motor, then have it claimed for a tenth of that.

There is one fact about motorsports though, there is always someone that will spend more than others to try and win. While the claiming rules do not stop everyone from spending a lot of money to build an engine, what it does is spread some of those good engines around when they do get claimed … that in itself helps to keep things on a much more even playing field, and in the long run, that is what the claiming rules are meant to do.

So what is the secret? There really isn’t one. Just like any build, you build to the customer’s budget using 100 percent of your experience, knowledge and abilities, whether it is a $3,000 build or an exotic $30,000 build. That is what will keep the racers coming back – or any of your customers for that matter.

Jim Walbolt is a freelance writer and photographer specializing in high-performance and motorsports. 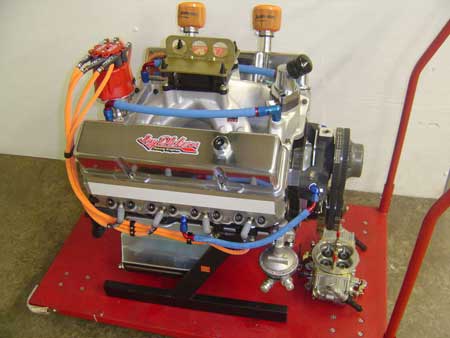