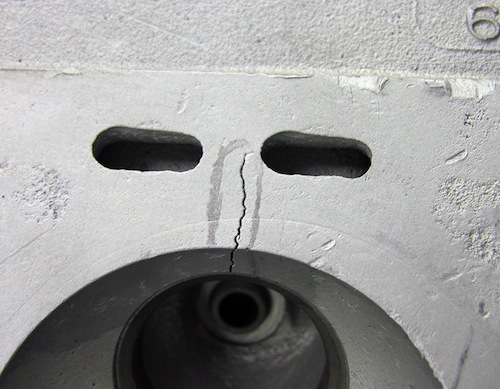 Cracks typically form when a cylinder head undergoes too much thermal stress. Loss of coolant, severe overheating as well as sudden changes in operating temperature from hot to cold can all create the kind of conditions that cause cracks to form.

It seems as if many cylinder heads are doomed to crack from the very start because of their lightweight construction and design. Aluminum overhead cam (OHC) heads, in particular, are often found to be warped as well as cracked. But so too are many pushrod cast iron heads.

Cracks are often blamed as the cause of a head failure. In many instances, the cracks are not the cause of the failure but a symptom of another underlying problem such as overheating, detonation or incorrect installation (wrong torque on head bolts, dirty bolt threads, etc.).

Cracks typically form when a cylinder head undergoes too much thermal stress. Loss of coolant, severe overheating as well as sudden changes in operating temperature from hot to cold can all create the kind of conditions that cause cracks to form.

When metal is heated it expands. Aluminum expands at nearly twice the rate of cast iron, which creates a mismatch in expansion rates on bimetal engines with aluminum heads and cast iron blocks. Even so, the heads are designed to handle a certain amount of normal expansion. But elevated operating temperatures can push a head beyond its design limits causing the metal to deform. This, in turn, may cause cracks to form as the metal cools and contracts.

When overhead cam heads get hot, they often swell and bow up in the middle. This may cause the OHC camshaft to seize or break as well as cracks to form in the underside of the head. Pushrod heads are not as thick as OHC heads so are less vulnerable to this kind of stress and warpage. But even pushrod heads have their limit, and when pushed too far will also warp and crack.

All heads should be thoroughly inspected for cracks using a variety of techniques before any machine work is done. Better to find out the head is cracked before you rework the valve guides and seats than afterwards. Think of crack detection as your first line of defense against comebacks.

Cracks do not necessarily mean a cylinder head has to be replaced. In fact, many cracked heads that were once thought to be “unrepairable” are now being fixed. Repairing a cracked cylinder head always involves a certain amount of risk, but when done properly is usually much less expensive than replacing a cracked head with a new or used casting.

Furnace welding a large cast iron diesel head is often well worth the effort because of the high value of the casting, but it also makes economic sense on many late model cast iron passenger car heads if the head can be repaired for less than the cost of a new or used casting. Many late model heads are fairly expensive and hard to find, so some heads that would have been scrapped because of cracks are now being repaired and returned to service. It all depends on the market value of the head and the cost to replace it with a new or used casting. The higher the value of the head and the higher its replacement cost, the more it makes sense to repair the head rather than replace it.

This industry has been recognized for being “green” before being green was cool, and that trend continues. According to the results of the 2011 Machine Shop Market Profile, fewer heads are being scrapped each year – we found that 18 percent of diesel heads and even fewer aluminum heads (14.9 percent) are being scrapped. But when they’re repaired, many rebuilders continue to leave the work to the experts. Our survey results indicate that half of respondents say they do aluminum cylinder head crack repairs themselves and only 25 percent do their own diesel head repair.

Pinning is the most commonly used technique for repairing cracks in cast iron heads because it’s fast, reliable and cheap. It can also be used to repair aluminum castings, too. Pinning is a relatively easy technique to learn and use, doesn’t require any special tools other than a drill, guide fixture and tap, and uses no heat.

The technique involves drilling holes in both ends of the crack to keep it from spreading, then drilling holes at various intervals along the length of the crack, installing overlapping pins to fill the crack, then peening over the pins with an air hammer to seal and blend the surface. Either tapered pins or straight pins may be used.

Tapered pins pull themselves into a crack as they are tightened to provide a tight seal along the entire length of the pin. This occurs because the threads on both the tapered pin and hole have an interference fit. Sealer really isn’t necessary, but may be used for added insurance. The holes for tapered pins must be carefully hand tapped with a tapered tap, and the pins hand tightened.

Straight pins, by comparison, can be installed with an ordinary straight tap and a power drill. Straight pins, however, must be sealed by a tapered shoulder on one end of the pin and/or with sealer.

Cracks in thin areas of a casting (thinner than 1/8?) can be difficult to repair because the metal isn’t thick enough to support the threads on a standard pin. For these applications, very small pins must be used to fill the crack.

On some applications, the crack between the valve seats can often be repaired with a single soft steel pin that has a countersunk shoulder. A steel pin works best in this application because it can withstand heat better than a cast iron pin. After the crack has been fixed, the seats can be remachined. There should be no need to cut the head to accept valve seat inserts.

Furnace welding cast iron is often called the “black art” of crack repair because it requires lots of heat and operator skill. Learning how to furnace weld cast iron is not something an inexperienced welder can pick up quickly. Those who have mastered the process say it takes at least six months to a year of constant practice to master it. If it were that easy, everybody would be doing it. It isn’t, and that’s why some shops have created a successful niche for themselves by specializing in furnace welding cast iron heads.

To furnace weld a cast iron head, the head is first preheated to 1,300 degrees F (cherry red) in an oven. This step is absolutely essential to minimize thermal shock and to relax the metal so it won’t distort when the torch is applied to the casting.

Because of the high temperatures involved in furnace welding, the induction hardening of integral valve seats is usually destroyed. This may require replacing the exhaust seats to the seats don’t pound out when the head is returned to service. For this reason, some shops prefer to braze weld cracks rather than furnace weld. With braze welding, the job can be done at 800 to 900 degrees so the head doesn’t get as hot.

Another technique for repairing cracks in cast iron heads and blocks is flame spray (powder) welding. The process is similar to brazing but uses nickel powder and a special torch to produce high strength repairs.

The basic technique of flame spray welding cast iron has been around for more than 40 years – its main advantage is that it is easier and faster than furnace welding.

Flame spray welding can create a strong and long-lasting repair the same as furnace welding but without as much heat. The head still has to be preheated and postheated, but not as much nor as long. Spray welding needs about 1,000 to 1,400 degrees F of preheat. Only the weld area gets hot so there is little risk of distortion.

Flame spray welding uses nickel-based powders and requires a special torch. The oxyacetylene spray welding torch has a trigger-operated hopper that feeds nickel powder into the flame. When the powder is exposed to the flame, it melts and fuses to the sides of the crack to fill the repair area. The process is similar to brazing but results in a much stronger repair. The powder can be used to fill holes and cracks, and to build up worn or damaged valve seats.

The process goes very quickly and can fill a three inch hole in less than a minute. With furnace welding, it might take three times as long to fill the same size hole – and then the part must be slow cooled for hours to keep it from cracking.

Flame spray welding is easier to learn than furnace welding, but still takes training and time to learn.

Cracks in aluminum heads are most often repaired by TIG welding (though pinning also works with small accessible cracks). The head must be clean, grease-free and dry before grinding the crack all the way out. Just grinding the surface and welding over a crack will likely be a short-lived temporary fix because the underlying crack is still there and will continue to grow. After grinding, the surface of the metal should be cleaned with a stainless steel wire brush.

When exposed to air, aluminum forms an oxide coating that contaminates the weld and interferes with fusing. A TIG welder prevents the formation of the oxide layer by bathing the weld with a steady supply of inert gas (usually argon). An alternating current is used to alternately heat the metal and burn off any oxide that forms.

Because aluminum can crack when subjected to too much heat in a concentrated area, the head must be preheated in an oven to 450 to 550 degrees F to eliminate thermal stress. The added heat also makes the head easier to weld because aluminum conducts heat away from the weld area rapidly. Keeping the head hot is one of the tricks to successfully welding aluminum, which requires working in an are free from drafts and occasionally reapplying heat to the head.

Welding techniques vary, but the basic idea is to melt the surrounding metal and fill the crack with molten metal and filler rod. An experienced welder can even “recast” a badly damaged area, saving a head that would otherwise be junk. The strongest welds are achieved by using a filler rod that’s the same alloy as the head, or very close to it.

After welding, the head must be allowed to cool slowly. A long slow cool down relieves stress in the metal, which if not relieved could lead to cracking.

Easy??No. Profitable??If done right, it can be very good money.

Check out our Engine Builders Buyers Guides for pinning and welding partners.