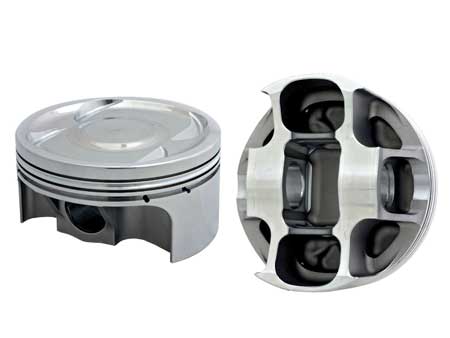 With the plethora of aftermarket high performance and racing cylinder heads on the market, piston manufacturers have been pretty busy making new designs that take advantage of these heads. Manufacturers can turnaround custom pistons quicker and have more “shelf” pistons than ever before thanks in part do new technologies such as CNC, CAD and CMM, not to mention better alloys now available.

But if I were a professional engine builder, or even a highly competent amateur engine builder, one of the first things I would do is learn as much as possible from the smartest people in the business.

While we at Engine Builder magazine provide countless articles on the subject and the business of running a highly successful engine building company, there is something about getting the information straight from the horse’s mouth, so to speak, that seems to go down like good medicine.

That is why I am very fortunate that my company sends me to the Advanced Engineering Technology Conference (AETC) every year. I carefully explain to my co-workers who have  shown interest in attending that they wouldn’t like it and there’s not much THEY would get out of it – because if the truth came out, I’m afraid my company would send someone else!

This year marked the 22nd edition of AETC, and it delivered as promised, just as it did the very first time it was held in Colorado back in 1989. You get a lot more than what you pay for at AETC. So the old saying doesn’t really ring true in this case, because there are many intangibles that come with attending this conference. And after several years of “covering” it for the magazine, I can say that I’m really starting to understand this engine building stuff a lot more!

One of the first things you learn, like at military bootcamp, is that you don’t know squat, just like everyone else. You are there to learn from each other and there are no dumb questions or dumb people, just like there are no prima-donnas when you walk into the room. Everyone is the same. Okay, maybe Harold Bettes and Tammy Holland, as well as Brian Reese, who help run the show, ARE a little better than the rest of us, but only marginally.

Over 200 attendees turned out to learn from some of the motorsports world’s top engineering minds at the 22nd AETC, which took place November 28-30, 2011, at the Orange County Convention Center in Orlando FL, just before the Performance Racing Industry (PRI) Show.

This year’s conference featured no fewer than ten speakers delivering seminars on subjects that ranged from airflow technology to valve train design and emissions standards, all within this year’s topic of “The Latest Advancements & Developments in Engine Performance Technology.”

Event organizer Tammy Holland said, “Each speaker brought something different to the table. Both the variety of companies represented and the topics covered kept the content fresh and interesting each day.”

AETC has steadily gained recognition in the industry since it moved to Florida in 2006. But it has always been one of the best kept secrets for what is now going on 22 years. While the shows from the last few years have seen a significant increase in attendance over previous years, numbers at this year’s conference were down a bit, which I?find baffling, since AETC has always delivered a powerful lineup of speakers.

Show organizers did, however, increase corporate sponsorship, an element of the event which has been growing the last few years as well. There were more products and discounts given away this year as well, which included the following:

Dr. Robert Prucka spoke at last year’s AETC and was so well received that he was invited back again this year as the opening speaker. Dr. Prucka again amazed all in attendance with the research and theories he has done with engine simulations that he oversees as assistant professor of mechanical engineering at Clemson University.

AETC prides itself on its access to speakers and industry leaders, whom you can meet at informal gatherings during breaks in the action to discuss issues in the racing industry with them and fellow attendees. There are no pretenses at this conference, as everyone is treated the same whether you run a company or work in the cleaning department. Next year’s show will be the same theme as the 22nd edition but with all new speakers, so stay tuned to www.aetconline.com. 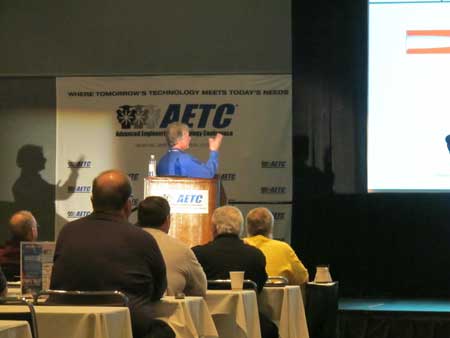