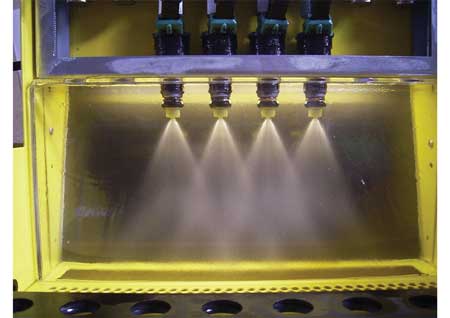 The fuel injectors should always be replaced as a set unless you are confirming the replacement injectors flow volume and spray pattern are the same as the original injectors by flowing them on a fuel injector flow bench.

This means that if you expect the engine you build to perform like it should, the fuel injectors should be cleaned and flow checked before they are installed. If you are supplying your customer with a new set of fuel injectors they should be flow checked to be sure they all flow within 2 to 3% of each other. If the flow rate varies by too much from injector to injector the engine will cause driveability problems.

The symptoms a driver will most often experience, as the fuel injectors get dirty, will be a gradual loss of engine driveability and power. These symptoms may appear so slowly with time and miles of driving that you may not even notice the loss of power and driveability.

Unless all the fuel injectors supply each cylinder with the correct amount of vaporized fuel the engine will not perform as well as it should, plus it will produce a higher level of exhaust emissions than it should.

Scan tool companies such as OTC/SPX offer low cost scan tools from the OTC # 3111 Code Connect to mid-price range tools such as the OTC Nemisys to the state-of-the-art OTC Pegisys/PC Scan tool systems.

The long-term fuel trim data obtained from a diagnostic scan tool can be used to read how much the computer is adjusting the fuel injector pulse width so the engine has the correct average air/fuel mixture.

The engine will perform its best when the computer does not continually have to correct for fuel injectors that are not supplying the proper volume of fuel the engine needs.

1. A fuel injector-cleaning chemical that you pour into the fuel tank can be used to clean the injectors. We have had very good results using an in-tank fuel injection cleaner such as Techron Concentrate Plus from Chevron. It is common for a vehicle owner to feel a noticeable increase in driveability and power after just one tank of gasoline treated with the fuel injection cleaning solution in the tank.

2. A second chemical cleaning method is to use a cleaner that is run through the fuel rails and injectors. This method allows a stronger mix of cleaning chemicals than you should put into the gas tank (the stronger mix of chemicals could possibly damage to the fuel system).

This cleaning method can do a good job, but again it does not allow you to check the fuel injector spray pattern, plus the fuel “filter” built into the fuel injector may become plugged with contaminants that are washed into it.

This method is more labor intensive because it requires that the fuel injectors be removed from the engine and installed on a test fixture to perform the testing procedure.

Ideally, every new fuel injector would be built to the same flow standards but holding a production line to that precise of a tolerance would raise the cost of the fuel injectors substantially.

Most new original equipment fuel injectors are held to a +/- 2% production flow variance, but some inferior replacement injectors that you buy at your local auto parts store may not hold to the same tight flow standards.

Also, due to part number consolidation, some injector suppliers sell fuel injectors with a flow rate that may vary as much as 25% from the flow rate of the OEM injectors that the engine’s computer is programmed to work with.

When a cylinder does not have the correct air/fuel mixture the engine’s power output, drivability and fuel mileage potential will suffer.

The fuel injectors should always be replaced as a set unless you are confirming the replacement injectors flow volume and spray pattern are the same as the original injectors by flowing them on a fuel injector flow bench.

The best preventive medicine to help prevent fuel flow restricted injectors is to tell your engine customers to use a gasoline that has detergents in it to help keep the fuel injectors clean and prevent deposit formation before it becomes a problem. Many of the car manufacturers recommend the use of a gasoline that conforms to the new “top tier” gasoline standards to help keep the fuel injectors clean.

“Top tier” gasoline has detergents in it that will help keep the fuel injectors clean as you use it, and many of the major gasoline brands are now being blended to these higher standards. The level of detergents in “top tier” gasoline is not always strong enough to keep your fuel injectors clean, so from time to time your customers may need to add some extra cleaning power to their fuel.

The use of an in-tank fuel injector cleaner such as Chevron’s Techron Concentrate Plus at the same mileage schedule as you change your engine oil is a very good way to be sure your fuel injectors stay clean. A dose of Techron Plus will raise the level of detergents in a tank of gas by about 10 times what it is in a typical “top tier” gasoline.

Techron Concentrate Plus is one of the best in-tank fuel injector cleaners we have used, and the “plus” is that it helps protect the fuel system against the corrosive effects of sulfur that is commonly found in today’s gasoline.

CNG or compressed natural gas is an environmentally friendly alternative fuel source in place of gasoline because CNG is a very clean burning fuel. CNG powered vehicles have lower maintenance costs than gasoline powered vehicles but they still need service. The fuel injectors that are used with CNG are much higher flow than the same engine would use with gasoline but it still uses the same tiny filter that a standard fuel injector uses.

The debris that flows thru the fuel system and the oil vapors from the CNG compressor can cause fuel injector flow problems as the filter becomes restricted. The fuel injectors can become so flow restricted that engine damage may happen in extreme cases.

It would a good idea to have the fuel injectors cleaned and flow tested on a fuel injector cleaner/flow bench whenever a CNG powered engine or vehicle is in the shop for a tune-up or rebuild.

When all the fuel injectors are flowing the correct amount of fuel to each cylinder, the engine performance will be at its best supplying the vehicle with maximum power and fuel economy. Fuel injector maintenance and service is a very important part of proper vehicle maintenance.

Choose the fuel injector cleaning method that works best for you, and don’t forget to change the fuel filter. 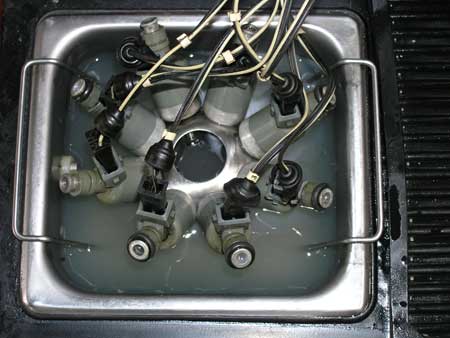