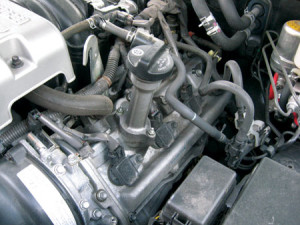 Due to the size of this engine, clearances are very tight for the timing belt repair, especially on the smaller 4Runner.

When I first started ­researching this article, I called and stopped by several shops that do work on Toyota vehicles.

I asked if any of them had any V8 models coming in for timing belts so I could get some pictures of the process. Either a blank stare, or a question like: “What Toyota V8?” was the general response. The idea that there was a Toyota V8 needing a timing belt ­replacement seems to be generally ­unknown in the aftermarket.

With a million or more potential timing belt jobs out there on the various models with belt-driven cams, it’s time to get up-to-date on the service of these engines. All are considered interference engines that “could” have serious damage if the belt breaks. On all belt-driven Toyota V8 engines, the water pump is also driven by the cam belt.

A Look Back
In actuality, the Toyota family of cars has had a V8 engine available for use since about 1963, just not in the U.S. That might explain how those old Toyota sedans could keep up with James Bond in a Toyota 2000GT in You Only Live Twice, filmed in Japan in 1967. Both the 2000GT and the Toyota 8-cylinder V ­configuration engines were produced in the mid-1960s with help from Yamaha. This engine series was never sold in a car in the U.S., but was used in other markets until the late 1990s. This engine is often referred to as the Toyota “hemi,” as it had hemispherical combustion chambers.

The modern Toyota V8 we are familiar with was originally used in the Lexus LS series starting in 1989. This engine series (UZ) is still around in great numbers, though it has been redesigned and upgraded a number of times. The engine was even certified for aircraft use in a twin-turbocharged
version!

The second series 2UZ-FE at 4.7L and with a cast-iron block, was installed in the Toyota Land Cruiser starting in 1998 as well as the Lexus LX 470. It has been available in other Toyota truck lines since the 2000 model year. With the addition of VVT-i technology (variable valve timing with intelligence), this engine became the standard engine for Toyota V8 trucks up to 2010 (2011 in the Land Cruiser).

The other engine in the UZ series is the 3UZ-FE and at 4.3L and all aluminum, it was available only in Lexus vehicles or for racing-only models. The UZ ­engine has been replaced across the Toyota and Lexus lines by the UR series, which uses a chain to drive the camshafts.

The 5.7L V8 is the sales leader in the Tundra and Sequoia. It is a UR motor, so this article doesn’t apply. With that in mind, when a customer or installer calls in to inquire, you need to determine which engine is in the vehicle before making any service quotes, especially at the recommended 90,000-mile service interval that Toyota lists for the timing belt on the UZ engines.

The other current Toyota V8 engine is the NASCAR engine known as the Tundra Racing V8. Designed, developed and produced in the U.S. by Toyota Racing Development (TRD), this engine is a pushrod ­design, and certainly does not have a timing belt.

Installer Repair Cautions
Each of the various models that use the V8 engines have specific items that must be removed to allow access to the timing belt and allow room to remove the accessories, belt drives and timing covers. Repair times quoted are somewhat misleading for some models.

If there are any indications of oil leakage at the front of the engine and a possibility of having to replace seals is necessary (cam seals), the repair time can double if the valve covers and camshafts have to be removed (VVT-i engines). If the camshafts need to be removed to replace the cam seals, it would be good to measure the valve clearances before disassembly so the necessary shims can be replaced in the process. Obviously, if there is any evidence of sludge buildup with the valve covers off, address the issue with your customer. Since the engines that have VVT-i rely on oil pressure to control camshaft timing, sludge can be a killer.

In a search of pattern failures on these engines, it’s very obvious that the source of many problems is the use of non-OE or OE-equivalent timing belts. Tooth count and timing alignment markings are critical, ­especially on the VVT-i engines. Be careful to compare the replacement belt to the original for tooth count between the alignment markings, as even a half tooth might make you redo the job. A belt that does not have alignment marks identical to the OE belt should not even be installed.

Another source of codes and driveability complaints after belt replacement is damage to the crankshaft position sensor reluctor wheel, that must come off during the process of replacing the belt. Extreme care should be taken to prevent any scratches or other damage to the wheel. Harsh cleaners or abrasives should not be used to clean this part or any of the pulleys or sprockets. Typical codes that are related to timing belt misalignment or potential sensor wheel damage are P0011, P0021, P0016 or P0018.

Advertisement
In this article:timing belt, Toyota