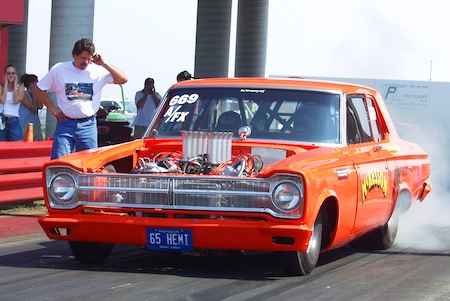 Engine builders have had a significant role in the drag racing market since the very first pass, as the sport is largely based on the strength of one engine over another. (Photo courtesy of Rod Short)

At the top levels of drag racing there are multi-million dollar teams supported by corporate sponsors, but for the sportsman and bracket racers across the country, it’s still mostly supported by the racer’s wallet. Yet many of these racers have pretty deep pockets and the benefactors are those who service the market, including engine builders and component suppliers.

According to market research, there are approximately 155,000 active drag racers in the United States alone, and drag racing is growing in popularity internationally as well. The FIA has recognized drag racing so it can sanction events in other countries. But the true potential for performance engine builders to sell engines and service the market is right in the heart of drag racing’s sportsman ranks, according to many experts.

There are hundreds of classes in drag racing, each with different requirements and rules on engine size, body style and even aerodynamic modifications. The National Hot Rod Association (NHRA) and International Hot Rod Association (IHRA ) are the biggest sanctioning bodies but there are many others, and some share the same classes, while some only run in one division.

Engine builders have had a significant role in the drag racing market since the very first pass, as the sport is largely based on the strength of one engine over another.

Sonny Leonard of Sonny’s Racing Engines in Lynchburg, VA, builds engines for all levels of drag racing and also sells engine parts and even kits to racers who want to assemble their own engines, but reveals that right now pricier turnkey engines are his biggest sellers.

“Our market right now is really in high-end engines because the middle class just can’t afford it like they used to,” says Leonard. “Overhead has gone up 25 percent in the last few years and most people have stayed flat on the income side, so we don’t sell as many engines in the lower to middle ($25,000-$40,000) ranges. Our market is the $75,000-$100,000 engines at this point; surprisingly, perhaps, these are what we are selling the most.”

An increasing number of sportsman level racers today are successful away from  the drag strip and aren’t interested in doing engine work, say our experts. These racers make a lot of money doing whatever it is they do for a living and would rather pay you to build a competitive engine so they can go out and have fun.

Leonard says he recently built a 1,000 cid engine for a customer out West to run Top Sportsman. The naturally aspirated engine made 2,150 hp on racing gas. “It was intended to run in the ADRL Pro Extreme class that is limited to 5.300? bore spacing and the guy wanted the biggest engine he could get. It’s similar to a Pro Stock but is actually longer by about an inch and a half to get a larger piston in it. Still it bolts up in the back like a regular BBC. The owner of this engine is going to run it in the next month or two.

According to Leonard, one of the reasons guys are pushing the displacement limit as much as they are is because they are actually playing it safe. He says a lot of guys don’t want to take a chance of melting a piston or anything when they are bracket racing. “There are a ton of things that can go wrong. If the tune up is off, a solenoid gets halfway stopped up with gasoline, you got too much nitrous, and the ratio is off and you hurt a piston, it’s a real problem. These guys don’t want to spend all night repairing a motor,” he says. “They want a bigger engine that makes more power on its own so they can avoid using nitrous.”

Sonny’s builds engines for racers competing in several drag racing divisions including NHRA and American Drag Racing League (ADRL). Leonard says that a lot of his Pro Stock and Pro Mod guys used to run in IHRA but that sanctioning body eliminated those classes so most run in ADRL or NHRA now.

Leonard says that the limit for NHRA Pro Modified is 910 cid, and his racers want every bit of that they can get, so he builds 903s for them. Many of his customers who run Top Sportsman and Top Dragster, a lot of them don’t want to have to depend on nitrous. But he also builds for guys who run from 600 to 900 cid with nitrous. “It all depends on the customer’s budget and how good his car is,” Leonard explains. “If he has a good car, he may not need to run nitrous. If a guy doesn’t have a very good car but drops in a good engine that makes 2,000 to 2,500 horsepower to compensate, he won’t be able to hook it up anyway.”

“The first quarter of this year has been our best quarter ever,” says Driskell. “I’ve sold more new engines at the beginning of the year than I ever have. Some of them have been guys who own their own businesses and who make money. And others have been people who have been spending money because they’ve figured out how to survive and how their family’s going to make it and they can still go racing.”

Driskell says that for the most part, his customers are not doing the work themselves – they prefer to have an expert build it for them. “I see guys who say, ‘This is how I make my living and I’m going to continue doing my job. I’ll make a little bit more so you can build they engine. You’re better at it, that’s what you do,’” he says. “We do some work for guys who just need to have the block honed for some guys they’re working with, but our bread and butter has been in doing the complete turnkey engines.”

For the bracket racer, the preferred tool is a dragster, according to Driskell. “Everybody likes being the faster car, and depending on which cylinder head you choose, there’s not really much difference in price between a 535 or 632, so why not build the bigger engine and go faster?”

Driskell says he’s not seeing overwhelming interest in the big cubic inch 5.000? bore space stuff for the Top Dragster and Top Sportsman classes despite its increasing popularity.  “We don’t build a ton of these. It’s not so much that it costs more money, but you want to make sure you qualify everywhere you go. A racer is going to need either a $75,000-$80,000 engine or he’d better have some nitrous. Some guys think that if they’ve already got a spread port head 632, maybe it’s worth adding a couple of stages of nitrous to it.”

Driskell acknowledges that the big cubic inch stuff is very reliable today. “They’re all well-designed pieces. Everything else that is standard bore space (4.840?) is all derived from a standard deck height 454. When you start building one of these, pushrod clearance, pushrod angles, all that stuff, nothing is optimized. It takes a lot of work to build one. The new 5.000? bore space stuff, it’s easier to build. The pan rails are spread apart, clearancing is virtually all done for you, pushrods clear because they were designed for a tall deck and so on. Most of it is all very well thought out and designed.”

Doing engine work in stages can make more economic sense for some customers, Driskell says. “It can be pretty tough for someone to spend $40,000 to $50,000 at one time, so they may start out with some heads they already have and then build a really nice short block. In a couple of years they can get a new set of heads, but they can’t make the complete switch to a different bore space block, so they buy a tall deck aluminum block and build a 632 and put their conventional head or 18 degree head on it.  Then, two or three more years down the road, they can move to an 11 degree or 12 degree head and sheet metal intake.”

He says, “When they work in stages like that, I think it’s just part of being smart with your money. I realize  there are engine builders out there who are building 15-20 big cubic inch engines a year – they just have a different customer base than I have.

Driskell says that his customers are primarily bracket racers, competing in Super Comp, Super Gas or Super Street for NHRA, and Top Dragster and Top Sportsman. “A lot of my customers want the flexibility to be able to bracket race but also go off and run a big event at which they need to run 6.70s or 6.80s. They need something pretty versatile. I sometimes have to try to talk some sense into them asking if they really want to spray this thing for an extra 300 hp for just one race?” he jokes. “I?tell them if they want to go to win big money, they would be better off at a bracket race that pays $10,000 or $20,000 to win.”

Driskell says one of the biggest growing markets for him is in the truck pulling segment. It’s drag racing on dirt, he says. “It’s pretty much a drag race engine, and it’s kind of fun because they run mostly from June through September at county fairs and events. There are essentially two things that win truck pulls: horsepower and rpm, and those customers are willing to spend money to get both.

Larry Ofria, Valley Head Service, Northridge, CA, not only builds drag racing engines but campaigns a couple of nostalgia drag cars under his company’s banner. He runs a 1957 stock-bodied Chevy Bel-Air in American Nostalgia Racing Association’s (ANRA) A/Gas Supercharged class, with a blown alcohol 388 cid. It ran a 7.23 at Bakersfield in March of this year.

Running the small block in the ’57 Chevy is Ofria’s way of keeping with the era of the vehicle rather than any rules that are mandated by the series. “We have the smallest engine in the class, by all means. And we have to run against guys who have 832 cubic inches, and we still outrun them,” says Ofria. “That’s less than half the size of some of the others. It uses blown alcohol, but you can run any fuel you want as long as you don’t go any quicker than 7.60.”

Remember: racers can be a demanding bunch who expect a little hand holding. After all, they’re buying more than just an engine – they’re buying your expertise as well.